Ryanair’s Budapest Airport cuts – not as bad as they seem 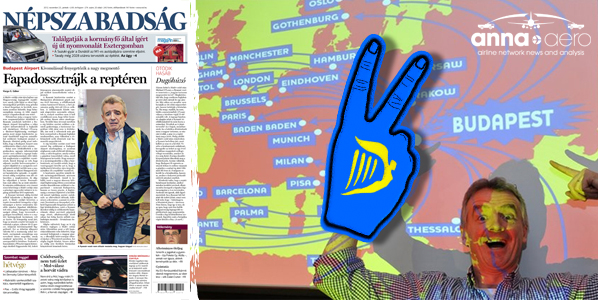 “Fapadossztrájk a reptéren” – those with a reasonably firm grasp of Finno-Ugric languages will know the headline means “below the belt” (surprise, surprise, Ryanair is hated by Népszabadság, a major left-wing daily and past proponent of saving Malév). But Ryanair is just a teeny-weeny bit guilty of totally blaming airport costs for its decision to axe 10 routes: anna.aero indicators show the services fell well short of its vigorous performance requirements.

“There are changes coming, but to what extent – we don’t know,” Budapest Airport’s Patrick Bohl, Head of Airline Business Development rather prophetically told anna.aero during the 131st IATA Slots Conference in Toronto a couple of weeks ago.

Those uncertainties became certainties a few days later with a Ryanair statement firmly blaming the airport owner: “40% cuts at Budapest as Hochtief fails to offer competitive costs”  leading to the axing of 10 routes and the dropping of two based aircraft – all very different news from when the airline had helped save the day with the new Ryanair base launched in mid-February following the collapse of Malév.

High operating charges imposed by airport operators across Europe are indeed cited as the usual suspects when it comes to Ryanair closing down shop. However, anna.aero’s comparison of published monthly traffic data for airports in Germany and the UK (source: destatis.de, March-August 2012; CAA UK, March-September 2012) with relevant capacity figures (source: Innovata), show it was pretty likely that the axed routes were mainly just under-performing. 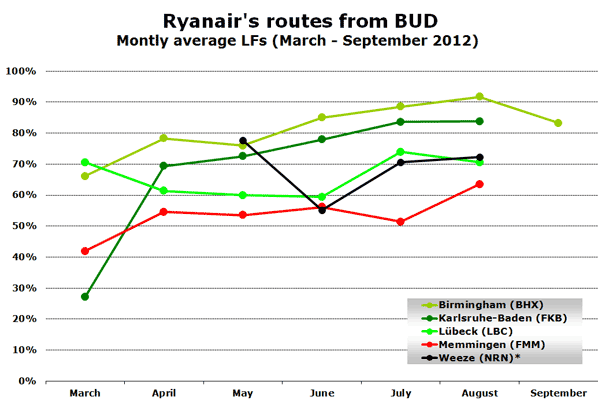 While the average load factor across Ryanair’s network is 84% (source: Ryanair’s Half Year Results, 30 September 2012), none of the German routes neared this result; indeed Ryanair had already ceased operations on November 12  on its weakest German route to Memmingen/Munich after load factors were unable to climb much above 55%. Flights to the axed route of Birmingham turned out to be the sole route to exceed the 90% load factor threshold, but only in the peak month of August.

Despite poor loads, the routes abandoned, but ‘warmed-up’ by Ryanair, will now be examined by other carriers for opportunities. Of the 10 axed services only Alicante faced direct competition – low-frequency flights by Budapest Airport’s largest carrier, Wizz Air (which is scheduled to relaunch the service in June 2013). On four further routes – three to Germany and one to Norway – Ryanair was indirectly challenged by carriers preferring to use the main cities, rather than secondary airports. In January 2013, Lufthansa will offer six weekly flights to Hamburg (in competition with Lübeck), 11 weekly flights to Düsseldorf (18 weekly during S13) – competing with Ryanair’s Weeze services, as well as 33 weekly frequencies to Munich (to which Memmingen was Ryanair’s alternative). Norwegian will also offer six-per-week services to Oslo’s main airport, whereas Ryanair was using Oslo Rygge. 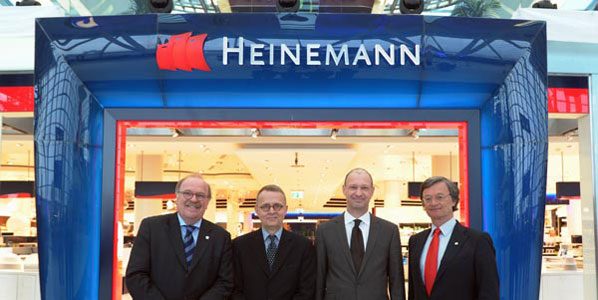 Airport jobs and routes: Ryanair says that the 10 axed routes means “the loss of 800,000 passengers and 800 on-site jobs at Budapest Airport.” The basis for this claim is a 2004 study produced by York Aviation for ACI EUROPE: “The Social & Economic Impact of Airports in Europe.” 800 direct job losses? Really? Hmmmm, does anyone want to comment on that? (The photo of the duty free shop in the new Terminal 2 SkyCourt is ‘borrowed’ from The Moodie Report – thanks Martin.)

Indeed Wizz’s EVP, John Stephenson, told anna.aero it is very interested in the routes already warmed up by Ryanair:  “Wizz Air is very committed to the Budapest market and, following Ryanair’s announcement to cut routes at BUD, as you would expect Wizz Air is looking at any potential opportunities arising from this decision.”

In addition, in a well-timed announcement for both Budapest and the serial re-financed SAS, the Scandinavian carrier will relaunch flights from Copenhagen and Oslo for the coming summer season. “A large number of Hungarian and Nordic companies have expressed a strong desire for a direct service between Hungary and the Nordic countries and this is SAS’ response” said Stefan Eiche, SAS’ GM Hungary.