The beginning of November saw the arrival of Spirit Airlines’ fifth route in Tampa International Airport, FL, as the airline launched daily services to Chicago O’Hare, IL, meaning Spirit has doubled its capacity since November 2011. Last year, the airport handled 16.7 million passengers making it the 30th busiest airport in the US as passenger numbers increased marginally, by 0.5%. Traffic in the first three quarters of 2012 suggests that the airport is likely to maintain similar rate of growth for at least another year. 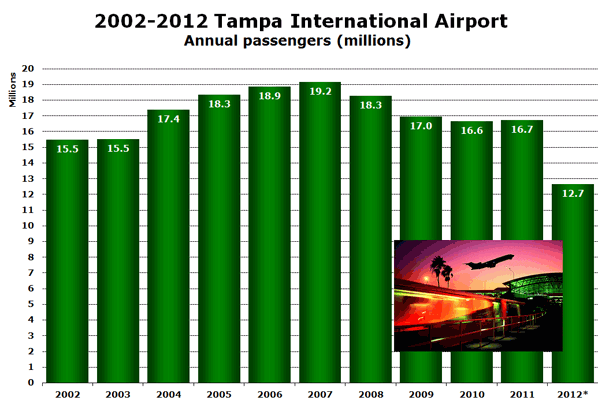 Similar to the situation in Baltimore/Washington, which was also recently subject to an anna.aero analysis, Southwest’s takeover of AirTran means that the two airlines now account for almost 40% of both frequencies and weekly seat capacity in Tampa. Only three other airlines have more than 10% capacity share – Delta (15%), United (12.5%), and US Airways (10.4%). Meanwhile, both JetBlue and Spirit Airlines are increasing their Tampa presence: In addition Spirit’s doubling, JetBlue had increased capacity by 24% by w/c 26 November 2012 compared to the year before. 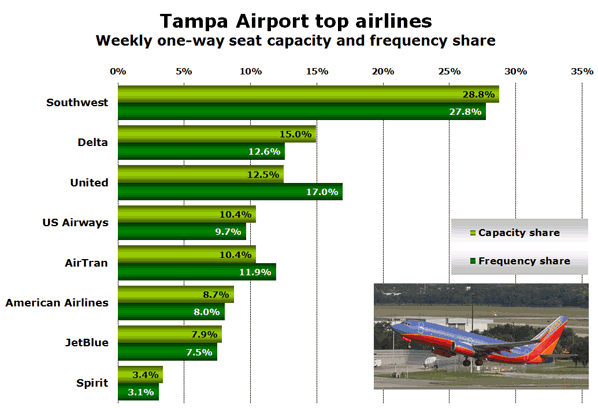 According to US RITA BTS data for the first seven months of 2012, Atlanta tops the top-five list of largest routes from Tampa, followed by Charlotte, Philadelphia, Detroit and New York Newark. Out of these, Detroit saw the largest capacity growth over the last year, as Spirit Airlines almost doubled the number of frequencies offered in the course of last year.

International traffic decreases 10% in a decade

Unlike domestic traffic, which saw passenger figures in Tampa increase by 7.9% since 2002, the international segment experienced quite the reverse trend. The airport had lost the equivalent of almost 9.6% of its 2002 international traffic by 2011, hitting the 10-year low at just above 370,000 passengers in 2007. However, it has since managed to recover some of this and 2011 international traffic was 14% better than in 2007. Only five international routes are currently available from Tampa. Notably, Toronto Pearson, which is served by both Air Canada (nine weekly frequencies) and WestJet (seven) is the largest foreign destination, while British Airways provides the most capacity with a six-per-week 777 service to London Gatwick.

New routes launched from Tampa in 2012 include two each from JetBlue and Spirit Airlines, as well as Frontier’s low-frequency schedule to Kansas City, MO, which was operated on a seasonal basis until mid-April. Only one international route was launched this year – Edelweiss Air’s low-frequency seasonal service to Zürich.