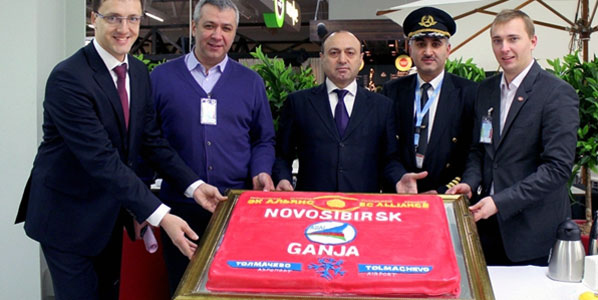 Domestic and international route growth, including this week’s new single weekly 757 route from Azerbaijan’s second city of Ganja to Novosibirsk in Russia, has helped to grow AZAL’s weekly seat count by 16% in the last 12 months.

Home to over nine million people, oil-rich Azerbaijan is the largest country in the Caucasus region and is located at the crossroads of Western Asia and Eastern Europe. The nation’s flag carrier Azerbaijan Airlines (or AZAL as it sometimes referred to) has its head office in the capital Baku, as well as its main hub at the city’s Heydar Aliyev International Airport.

2012 has been one of flux, with AZAL inaugurating new services to Rome Fiumicino in April, Istanbul Sabiha Gökçen in May and Novosibirsk in June. However, routes dropped since December 2011 include international connections to the UK’s oil capital of Aberdeen, Astrakhan and Rostov in Russia, as well as a domestic link to Zagatala in the north-east of the country. 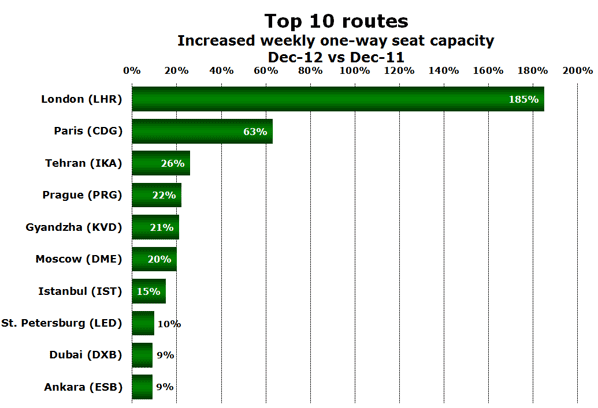 While three of the airline’s top five routes in terms of seat capacity have remained unchanged and have achieved significant growth – namely Istanbul Atatürk, Dubai and Moscow Domodedevo – two new routes have smashed their way into AZAL’s biggest performing services in the last 12 months. New double daily flights to fast-growing Istanbul Sabiha Gökçen have been introduced to take fourth spot, while fifth place has been secured by London Heathrow where services have been upped from thrice weekly to daily since last December.

The IATA member airline has recently signed a $181 million deal with Embraer for four E190s with deliveries planned to start in Q3 2013, becoming the manufacturer’s 25th customer in Europe. In addition to these new aircraft, AZAL has also purchased two pre-owned E170s, the first of which will be delivered in Q2 2013. While some of these aircraft will be used to replace its turboprop fleet, the regional jets will also allow the carrier to increase frequencies on its domestic route from Baku to Nakhchievan, as well as starting new international routes such as Odessa, Volgograd, Sochi and Donestsk.

What does this mean for further route development by AZAL?

The arrival of these regional jets should open up opportunities from Baku to a host of unserved cities spread across regional markets which were either too distant for AZAL’s turboprops or too thin, from a demand perspective, for its larger capacity Airbus fleet. The range of each aircraft, taken from the manufacturer’s website, is around 4,500km and 3,900km for the E190 and E170 respectively and both are represented below. 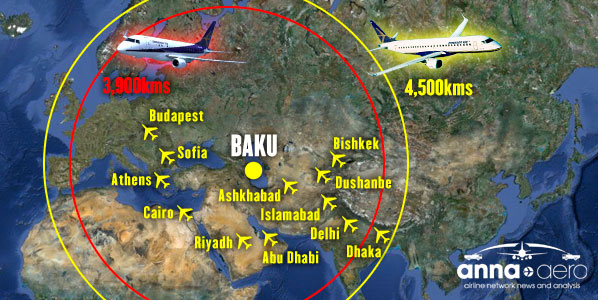 AZAL’s spending spree is not confined to regional jets; Two 787 join the fleet in 2014 – the US would seem to be the obvious choice for these new airframes.

In Europe destinations like Budapest, Athens or Sofia could well be switched on or, when looking at the Middle East, perhaps Abu Dhabi, Riyadh or Cairo. Closer to Baku in the CIS, points such as Dushanbe, Bishkek or Ashkhabad may well feature in future network development plans but, if the Indian Sub-Continent was to become a target market for AZAL, then Delhi, Islamabad and Dhaka would all be in range of these capable aircraft.

AZAL’s new aircraft spending spree is not merely confined to regional jets, as two 787-8s are planned to join the fleet in 2014 which will also open up longer range route opportunities. The US would seem to be the obvious choice for these new airframes, with a New York link no doubt at the top of the list.

Forget Dubai, Baku is the centre of the world!

Increasingly for many people living in Europe but needing to travel to India, Pakistan, Nepal or China (and vice versa), traffic is being funnelled via one of the MEB3 hubs – be it Emirates in Dubai, Etihad in Abu Dhabi or Qatar Airways in Doha. But the reality is that flying via Baku actually offers a shorter alternative than “hubbing” through one of these better known airports.

While journey distances from Heathrow via Dubai to destinations like Mumbai, Ahmedabad or Karachi are comparable to those achieved through Baku (although GYD is still better) the variance become increasingly stark when looking at points like Urumqi, Islamabad and Beijing. In fact, flying to Beijing or Shanghai from Heathrow via Baku generates just 16% and 12% more flown kilometres than flying on a direct flight to these points from the UK. Compare this to the 39% and 29% increase in flown distance that travelling via Dubai produces, and you have a truly great location for a global hub. 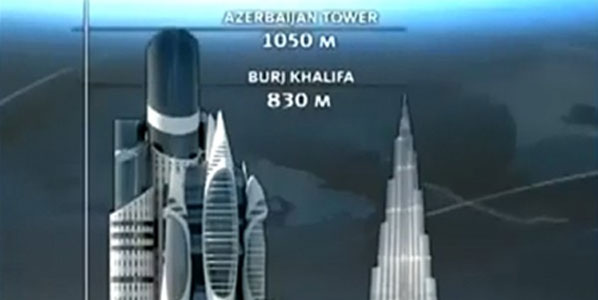 Baku – taking on Dubai? Seriously? Well Dubai did it – and oil rich Baku is having a go. For good measure it’s already planning the world’s tallest tower on an artificial island in the Caspian. Anything sound familiar yet?