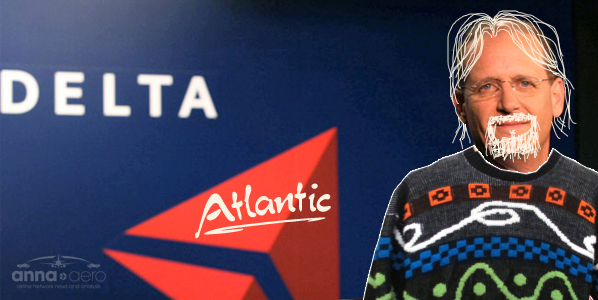 “Hi, my name’s Richard.” Overcoming anti-trust objections to combine routes with Virgin Atlantic, and make a new enterprise 50% bigger than United on the North Atlantic, may well just prove to be the easy bit for suit-wearing Delta CEO Richard H. Anderson.

Virgin Atlantic has outwardly been carrying on with moves to strengthen its network and business model by announcing domestic feeder routes into Heathrow from Aberdeen, Edinburgh and Manchester – although it has also had the prominent setback of losing out to easyJet in the battle to secure the heavily regulated and valuable London-Moscow route and, most significantly, watch as its main opponent at Heathrow, British Airways, has considerably strengthened its position with the acquisition of bmi.

This could explain Virgin’s sudden urgency to find a more strategically-meaningful owner for the 49% held by Singapore Airlines – and the suggestion that this could be Delta. But while both airlines are enjoying this speculation, there’s no structural explanation of how Delta could avoid exactly the same lack-of-control issues that have prevented Singapore Airlines from doing anything meaningfully exciting to combine or align the networks. 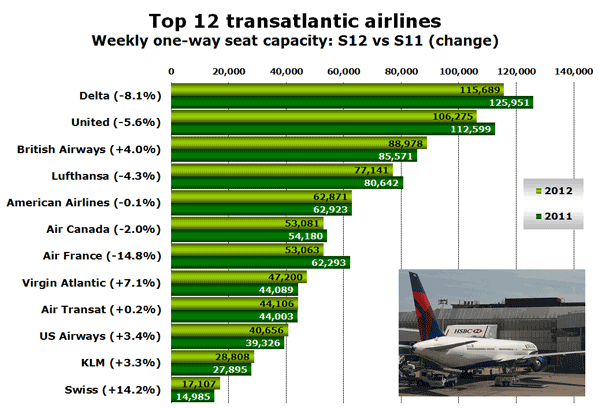 However, the combination of routes, particularly at Heathrow, would be a powerful force – something for friends and foes to all think about. An anna.aero analysis of the summer 2012 transatlantic market (weekly seats) in September showed that despite contracting by 8.1% versus S’11, Delta was still 9% bigger than its nearest rival United Airlines. However, if Delta was able to crudely combine with Virgin’s 47,200 weekly one-way seats, the new enterprise would be some 53% larger than United on the North Atlantic. 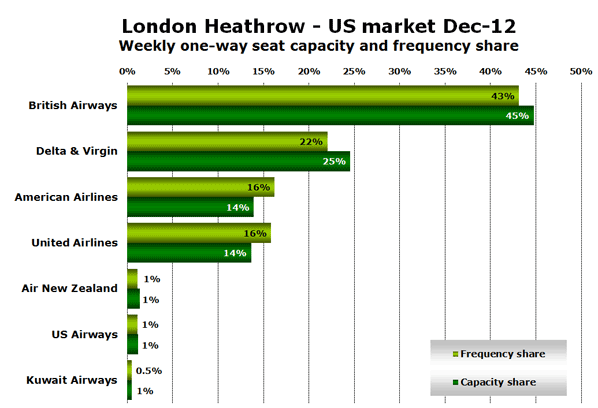 At the same time British Airways’ dominance (in terms of frequency and seats) would dramatically fall from around 30% to as low as 20% – again this is dependent on Delta being able to make ownership truly strategic, and to get anti-trust immunity: At Heathrow Delta-Virgin would strongly argue that the oneworld BA/AA alliance grouping is dominant in another dimension in being nearly 170% and 140% larger than Delta-Virgin in terms of frequency and capacity. 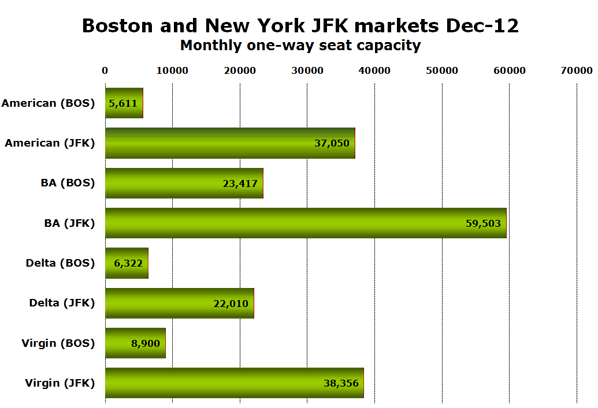 There are just two markets where American, BA, Delta and Virgin all compete head-to-head, but these are also vital routes – Heathrow to Boston and New York JFK – and as a result the ATI microscope will be focused sharpest here. The most dramatic effect is on LHR-JFK, where the UK’s oneworld representation would become completely neutralised as a combined Delta-Virgin would assume the #1 spot, ending BA’s supremacy in this key lucrative market, albeit with a small margin of just 863 monthly seats. On Heathrow-Boston services there would be less effect – Delta-Virgin would command over a third of seats, but still lag BA by 19%.

So, while the means to combine such utterly different brands –  corporate Delta and Sir Richard’s bohemian Virgin – remains a complete puzzle, in principle there is far more potential in tying up with an American partner and making the most of the “Atlantic” portion of Virgin’s origins – certainly far more than it has with its current Asian partner.

This is especially true as Virgin has not detailed any plans to do anything different to expand its 19 destinations to the US, Caribbean, Mexico or Canada from the UK for next summer, whereas Delta is in expansive mood, already announcing plans for further routes across the Atlantic, with next April seeing the launch of its planned New York JFK to Istanbul Atatürk daily 767-300 operation.