Boeing remains in the lead over Airbus; LOT Polish Airlines takes its first 787-8; Tibet Airlines receives first A319 from Tanjin For the second consecutive month, Airbus managed to make up for some of the difference it has incurred to Boeing, as in November it had its second-best month this year, delivering 54 airframes – three more than its US counterpart. Compared to November 2011, the best month ever for Airbus, narrow-body deliveries decreased by four units, while the number of wide-bodies delivered was down by one unit last month. At the same time, Boeing increased its single-aisle deliveries to 34 from 27 last November, and grew the number of wide-bodies delivered from 12 to 17 units.

Following a strong October, when 107 aircraft were delivered, the world’s airlines received a total of 105 units from both manufacturers in November, making it the second most productive month this year in terms of deliveries. Overall, seven more airframes were delivered in November 2012 than in the corresponding month of 2011. China’s Tibet Airlines took delivery of its first A319 assembled at the Airbus Tianjin Final Assembly Line. It is the fifth A319 to join the all-Airbus fleet operated by Lhasa-based Tibet Airlines: The airline received its first Airbus A319 in July 2011 in Hamburg, Germany. 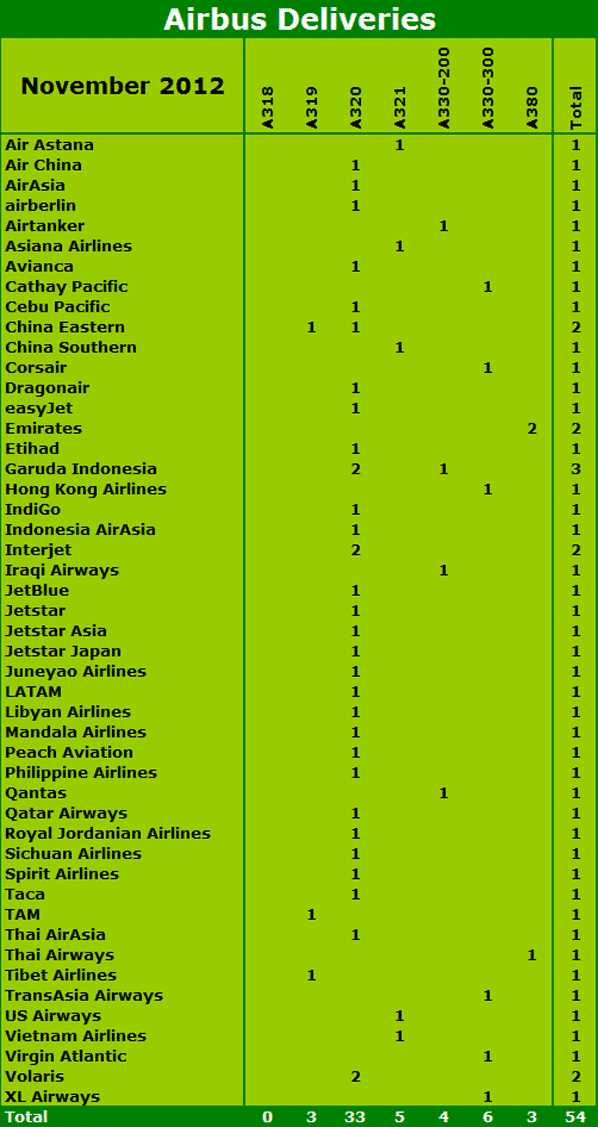 Airbus closed the month with a total of 54 delivered units, which signifies a decrease of two aircraft over the preceding month of 2012, and four units less than in November last year.

Once again, deliveries in November were led by the A320 family, with a total of 41 of these single-aisle jets provided to airlines worldwide. Notably, Garuda Indonesia, Interjet and Volaris were the only A320-recipients to take more than one unit last month, as Airbus delivered to 48 worldwide customers. In addition, Tibet Airlines received its first A319 assembled in Tianjin, China.

13 wide-bodies were delivered in November, one less than in the preceding month. Following last month’s record deliveries of five A380s, in November, three units of the type were handed over to Emirates (two air frames) and Thai Airways. Notably, three airlines incorporated the A330-300 in their fleets as a new type: Taiwan’s TransAsia Airways, Corsair and XL Airways (both French). 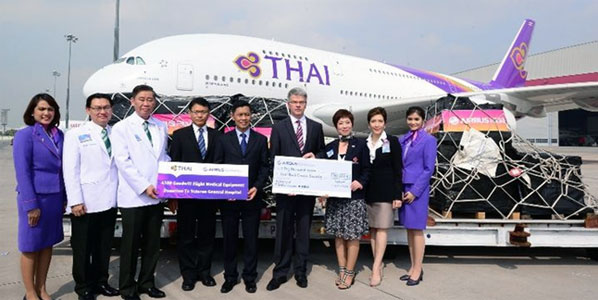 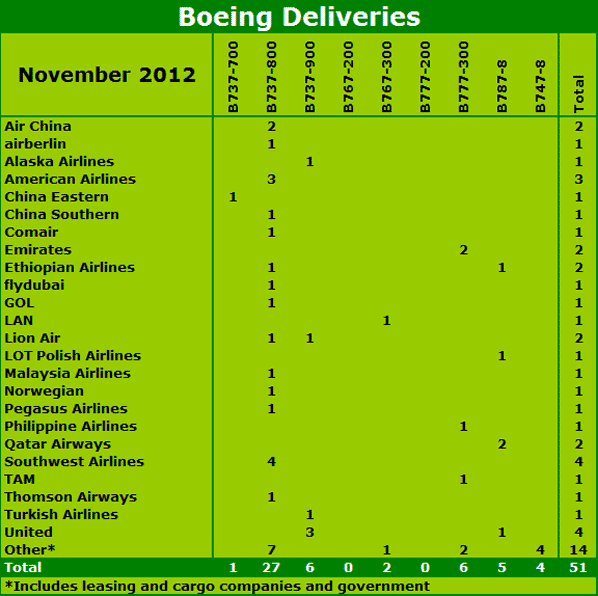 Boeing closed November with a total of 51 units delivered, one more than in the preceding month, and 12 more than in November 2011.

Airlines received a total of 34 narrow-bodies from the American air framer, two more than a month before. A number of airlines received more than one 737-800 from the US manufacturer, including: Southwest Airlines, which received four units of the type; American Airlines, which welcomed three new airframes of the type for the third consecutive month; and Air China, which saw two aircraft join its fleet.

Two less wide-body units were delivered in November 2012 than in October, and the American air framer considerably improved its year on year performance, as it delivered five units more than the 12 units it managed in November 2011. Three airlines incorporated 330-300 in their fleets as a new type: Taiwan’s TransAsia Airways, and the French Corsair and XL Airways. XL Airways France’s CEO, Laurent Magnin, said during the handover ceremony: “With this brand new aircraft, we will open additional routes as part of the expansion of our business in the French Caribbean.”