British Airways received the obligatory celebratory water-arch for the launch of its 27-weekly A319 connection from London Heathrow to Leeds Bradford Airport on 10 December. Assisting the ceremony were British Airways’ Capt. James Rowlands; Leeds Bradford Airport’s CEO, John Parkin; Olympic Gold medallist, Luke Campbell; British Airways’ Operations Director, Andy Lord; and the airport’s Commercial Director, Tony Hallwood. The latter commented on the success: “This is the culmination of three years hard work. We expect an extra 200k passengers per annum and increased connectivity to the Indian Sub-Continent and the US through this new link.” 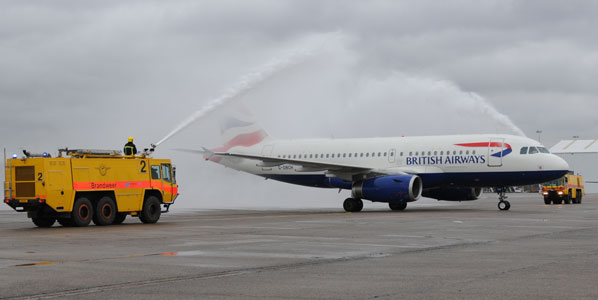 The maiden arrival of British Airways' thrice-daily service from London Heathrow to Rotterdam was welcomed with the traditional water cannon salute.