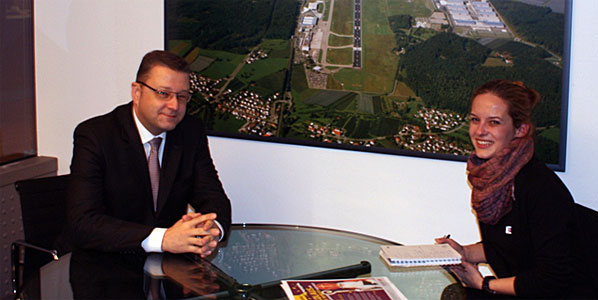 Host to anna.aero last week for the arrival of Monarch Airlines’ new service from London Gatwick (read our full report from the route launch here!), Friedrichshafen Bodensee Airport in southern Germany is strategically located to serve four countries – Germany, Austria, Lichtenstein and Switzerland. Its new terminal opened in September 2010, providing maximum capacity of one million passengers, who can then transfer to downtown Friedrichshafen and beyond using the on-site rail link. The airport’s new CEO, Gerold Tumulka, took over as head of this sleek (ILS Cat. IIIb means there have been no weather-related diversions in almost two decades) operation in summer 2012.

Just over 567,000 passengers used Friedrichshafen Airport in 2011, translating into a -3.9% decrease as compared to the year before. According to traffic figures published so far by AdV this year (January to October 2012), Friedrichshafen has not managed to revert the negative trend quite yet. However, passenger traffic in the first 10 months of the current year was only 2.6% less than in the same period a year before. 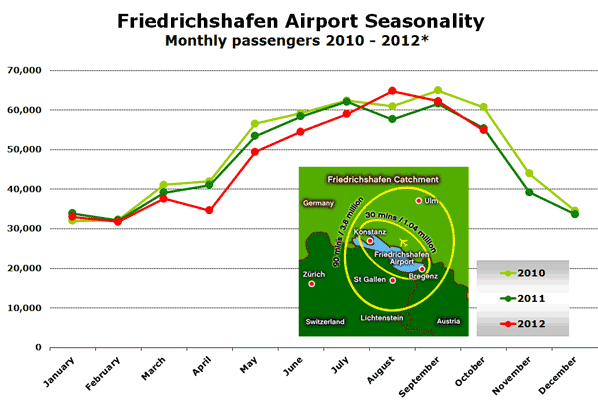 In spite of the region’s year-round appeal for inbound traffic, the airport’s business is still highly driven by outbound demand, which results in summer passenger numbers being twice as much as in the winter scheduling season. Tumulka, told anna.aero: “Awareness is a big issue for inbound demand creation. On our end, research shows that people chose Friedrichshafen whenever possible. In the summer, the Swiss account for a large proportion of traffic as they opt for the park-sleep-fly solution, which is better value for money than flying from home airports.”

InterSky the largest capacity provider; triples the number of routes in S’13

Unsurprisingly, Friedrichshafen Airport’s home carrier, InterSky, provides most of available capacity throughout the year, even though its share is considerably larger in the summer scheduling season (close to 7pp difference can be recorded between January 2013 and August 2013). As the airline plans to remove some of this capacity to focus on the development of its new base in Graz, Austria, the airport’s CEO comments: “The growth of an airport’s home carrier boosts the expansion of the airport itself and Friedrichshafen is committed to long-term cooperation with InterSky.”

Monarch Airlines two new routes (four-weekly to London Gatwick and twice-weekly to Manchester) make it the airport’s second-largest airline customer this winter season. The airline’s Commercial Director, Jochen Schnadt, who spoke to anna.aero’s Magdalena Fas en-route to Friedrichshafen last week, has high hopes for the new service: “Friedrichshafen ticks all boxes for Monarch as a year-round leisure destination and we appreciate the great effort made by the airport setting up the route and marketing it.”

As the rumour goes, Friedrichshafen could soon welcome services from a second full-service carrier, after Lufthansa, namely Turkish Airlines. The carrier, whose hub operation has been analysed this week by anna.aero, already launched flights to Bremen and Leipzig (which was the 10,000th route analysed by anna.aero ever) this year, and now operates to 11 points in Germany. While unwilling to comment on this possibility, Friedrichshafen’s Tumulka, underlined: “We are a niche full-service airport and Ryanair does not work for us,” hinting at the pan-European carrier’s turbulent presence in Friedrichshafen between 2004 and 2010.