InterSky: Craving the niche in the Lake Constance area anna.aero’s visit to Friedrichshafen on Lake Constance last week provided us with a perfect excuse to get in touch with the airport’s home carrier. InterSky, which was originally founded in 2001 and is headquartered in the nearby Austrian city of Bregenz, has strong ties to Friedrichshafen Airport, but has recently announced a major expansion from Graz. At the same time, the airline is undergoing the transition to dual-type fleet and will start operating two ATR72s in January 2013. Compared to the existing Dash 8-300s, the French-made turbo-props translate into almost 50% more capacity per sector.

InterSky grew its fleet from one aircraft in 2002 to four by 2008, and the corresponding traffic growth was only interrupted by the effects of the economic slowdown in 2009. 35% increase in passenger numbers followed in 2010, fuelled by the airline adding an additional aircraft. The wet-leased ATR 42-300 allowed InterSky to launch the twice-daily service from Friedrichshafen to Düsseldorf. 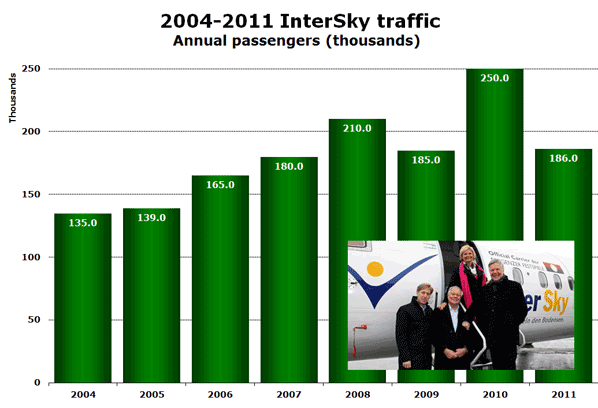 Capacity cuts, which begun in summer 2011 (August 2011: -21.2% year-to-year) further contributed to the weaker result for the year, and continued throughout 2012 (January 2012: -36.8%; August 2012: -38.2% year-to-year). The entry of new business partner, INTRO Group, in summer 2013, is expected to set the airline on new course. Renate Moser, the airline’s co-owner, said: “The big players like Lufthansa decided to concentrate on their hubs, opening niches for regional airlines. InterSky, owing to our new investment partner, INTRO Group, now has the ability to become a bigger regional airline.”

New base in Graz; Vienna disappears from the network

The launch of InterSky’s second base in the south-eastern Austrian city of Graz is scheduled for 7 January. Initially, flights Milan Bergamo and Zürich will be offered from the airport, with six and 12 weekly frequencies respectively. In addition, the airline will double frequencies on the route connecting Graz and Friedrichshafen. Will further routes be announced from the new base? Renate Moser is cautious: “Graz gives us many opportunities, and once the operation is up-and-running, we will examine any market opportunities.”

As InterSky redesigns its Friedrichshafen network, the disappearance of the six weekly service to Vienna will take place simultaneously, owing to overcapacity in the market. Austrian Airlines and Peoples Airlines each operate high-frequency flights from the nearby Alterhein-St. Gallen, providing respectively 15 weekly (Dash-8-400) and 17 weekly (E70) departures. Moser comments: “Even daily service was too much so we withdrew from this market. The free capacity will give us the chance to optimize our flight schedule for flights to Berlin, Düsseldorf and Hamburg.” Of these three, Düsseldorf will see the most capacity increase (36%), while Berlin Tegel will remain unchanged.

Second German base on hold

Until recently, InterSky was planning to launch its second German base in Karlsruhe in the south-west of the country, but the decision was ultimately reverted. Flights to Hamburg, which were in the pipeline would put the airline in direct competition with OLT Express Germany’s twice-daily Fokker 100-operated service, and Moser comments: “This route was one of our favorites and we wanted to launch it in early 2013. OLT Express had free capacity beginning of winter schedule and so they could start first. We decided not to enter into a competition.”

In the summer season, in addition to its regular services, InterSky operates a number of seasonal routes to the Mediterranean. The airline’s best served sand and sun destination in S’13 will be the Italian island of Elba, which it will offer from four airports (Friedrichshafen, Geneva, Milan Bergamo and Münich). Furthermore, weekly flights to Mahón in Menorca and to Olbia will be operated from Friedrichshafen. Croatian points Pula and Split disappear from InterSky’s schedule in 2013.