Maastricht-Aachen becomes Ryanair’s first Dutch base; expects to break 500k passengers in 2013 for the first time After launching 50 other bases up until July 2012, which had previously included none in the Netherlands, next week represents the culmination of three years of work by Maastricht-Aachen Airport to become Ryanair’s first Dutch base and #51 on its network. Commenting on the significance of the base, Mark Keulers, Senior Marketing, Communication & Sales Manager for the airport said: “Ryanair has been operating from here since S’07. The only period it did not grow was during the time the Netherlands implemented the so-called ‘ecotax’. We partnered with Ryanair against this tax up to the high court in the Netherlands. Just as we were taking the matter to Brussels, the tax was abolished by the Government in August 2009, after which growth and basing aircraft became an option again.”

The airline will base one of its 737-800 workhorses at the airport, which is situated in the Province of Limburg, and simultaneously launch three new services to Dublin, London Stansted and Venice Treviso, bringing its Ryanair route tally up to 14. Effectively, the move will supply an additional 150,000 seats per annum, and depending on the success of the routes, will deliver an extra 100,000 annual passengers. This figure will be augmented by the addition of route #15 from Ryanair, when a twice weekly service to Brive-La-Gaillarde in the south-western French department of Limousin, starts in April 2013 – Maastricht-Aachen’s first destination in France. 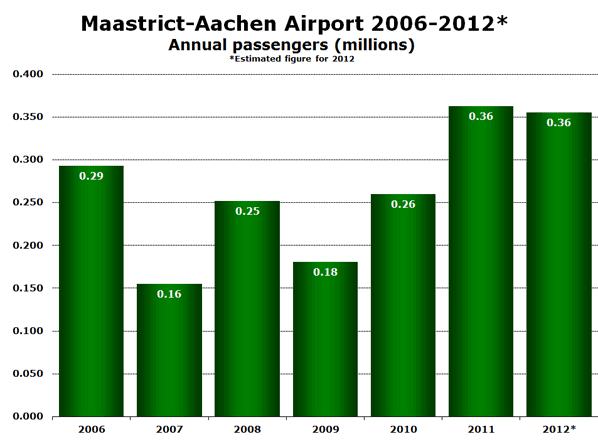 Prospects for 2013 appear to be bright, with the airport expecting to break 500k annual passengers for the first time in its history. “We do expect to make further route announcements in the coming weeks including services to multiple key European cities. It is however too early to give the full information on the airline and destinations, but we are confident the number of route launches in 2013 will come close to the seven new services we were able to announce in 2012,” enthuses Keulers.

Prior to the launch of next week’s new routes to Ireland and the United Kingdom, Maastricht-Aachen’s winter scheduled route network was focused on points in Italy and Spain. Malaga, Trapani and Bari are also offered as summer only flights by Ryanair, as well as Porto and Faro in Portugal. 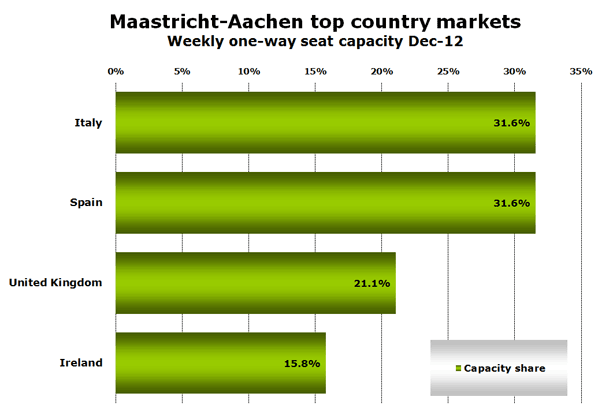 Germany has been lost as a country market during 2012, following the withdrawal of Germanwings’ four weekly A319 flights to Berlin Schönefeld in October, having originally started as a 12 weekly operation the previous March as an alternative to Cologne to avoid Germany’s aviation eco-tax. Keulers comments: “The airline was moved from Berlin Schönefeld to Berlin Tegel by Lufthansa, Germanwings did not get the slots it needed to continue its Maastricht-Aachen flights.”

If charter flights were considered in the country market analysis then Turkey and Greece would be added to the list during the summer months, with Transavia offering 737-800 services to Antalya (once weekly), Heraklion (2w) and Rhodes (1w). According to the airline’s website and confirmed by the airport’s Keulers, Dalaman will become the second destination in Turkey for S’13 from Transavia. Turkish airline Corendon also compliments this flying with its own service to Antalya during the summer.

While passenger services are becoming increasingly critical to Maastricht-Aachen, processing air freight remains the main activity of the Dutch airport. Boasting cargo airlines such as Cargolux, Turkish Airlines Cargo, Royal Jordanian Cargo, Allied Air Cargo and West Atlantic Airlines, the airport’s freight network is truly global with destinations from Cairo to Coventry, and recorded 3% growth to 92,500 tonnes of freight in 2011.

To explain the name, Maastricht-Aachen Airport is located in the most southerly province in the Netherlands. Due to its unique position, the airport serves not just its home Dutch market but it also draws traffic across the Belgian and German borders, just three and eight kilometres away respectively. It therefore joins an elite club of European airports which serve across national boundaries and have cities from more than one nation in its official name – which according to anna.aero’s data elves just includes EuroAirport Basel Mulhouse Freiburg. Airlines giving airports unofficial names do not count.