US-Caribbean to deliver over 7.5 million seats in W’12/13; nine more routes to come 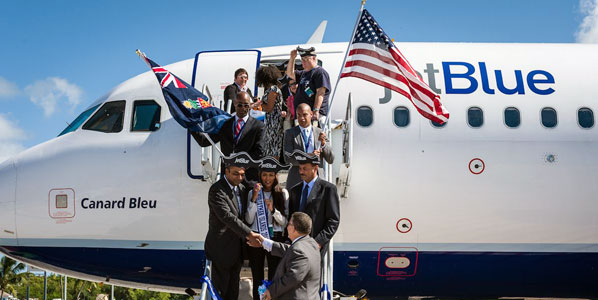 With four routes already launched in W’12/13 – including two from jetBlue to Grand Cayman last month – the US-Caribbean market continues to deliver new services. There are still nine routes yet to launch in anna.aero’s New Route Database in the coming months.

While North Europeans head for the Canaries or Egypt during the winter months in search of some sunshine on sectors of no more than four to five hours, the Caribbean fills part of this demand for sun-seekers in the US. However, the ensuing market is one where most non-stop services to the islands of the Caribbean Sea either originate down the eastern seaboard or central time zone of the US, and from just 15 of the 49 contiguous states plus the District of Columbia. As a result, for inhabitants of half of the nation’s top ten largest cities – namely those living in Los Angeles, Phoenix, San Antonio, San Diego and San Jose – that fancy a Pinã Colada in San Juan, Puerto Rico where the cocktail was born, their trip will start with a flight via an airline hub in one of these 15 states. 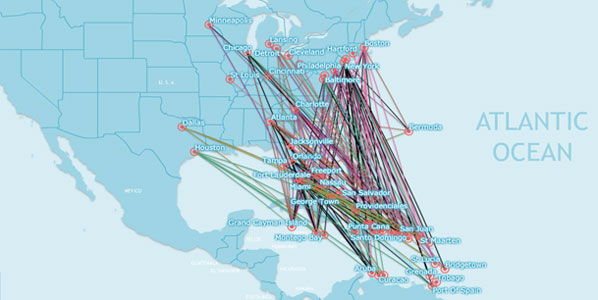 The importance of this winter sun rush to the region’s airlines is clear to see with over 300k of weekly seats; the outcome is a market that will boast more than 7.5 million seats over the 22-week IATA winter scheduling season before the end of March. Despite its significance, the total US-Caribbean market has shrunk marginally since December 2011 – with around 4% less capacity this year.

Delta Airlines’ 30% growth in this market over the past 12 months has been fuelled by extra capacity mainly from New York. Seat hikes include an extra 14 weekly flights from New York JFK to San Juan – the unincorporated territory of the US in the Caribbean – as well as seven more weekly flights to Santo Domingo in the Dominican Republic. New York La Guardia is also not immune to the Skyteam airline’s Caribbean growth, with a new daily flight to Nassau in the Bahamas. 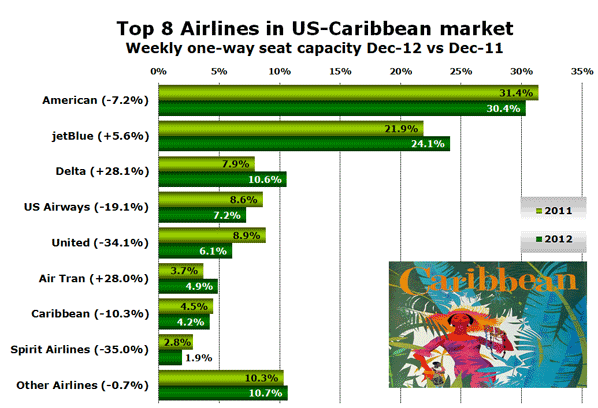 New daily A320-services from West Palm Beach in Florida to San Juan, single and thrice-weekly A320-flights from Boston and New York JFK to Grand Cayman, Cayman Islands, as well as twice-weekly A320-flights to Samaná in the Dominican Republic are among the services that have driven jetBlue’s significant annual seat increase. In fact, the New York JFK-based low-cost carrier is not afraid of pioneering untried routes, as it is the only airline flying from the US to this destination in the north-east of the Dominican Republic.

Net weekly flights cuts of 20 and seven respectively from New York Newark and Houston are the main reasons for United Airlines’ reduction in this market, as the airline continues to trim excess capacity following its merger with Continental Airlines. Services to Aruba, in Aruba have been cut completely from Houston, while operations to Grand Cayman and Montego Bay, Jamaica have both been reduced by three weekly flights, also from its Texan hub.

Excluding US territories, San Juan and the Virgin Islands, it is the Dominican Republic which lures most Americans away from their home shores, with close to 60,000 weekly seats and still growing. Six destinations are served on the island discovered by Christopher Columbus in 1492 from 13 of the 15 points offered in the US. Of the Caribbean’s over 7,000 islands, islets, reefs and cays, it is the former Netherlands Antilles colony of Curaçao that has seen the most growth in the past 12 months, with over 40% more seats than last December. 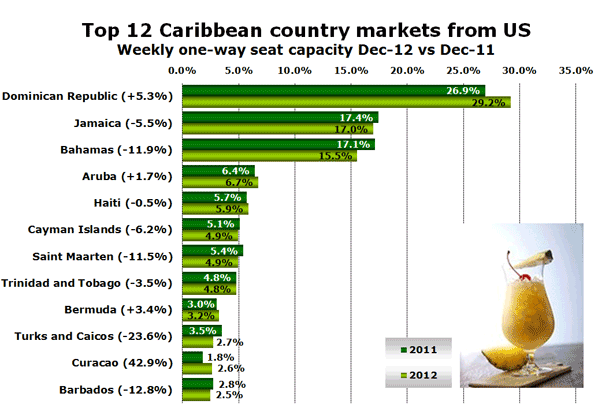 Despite all the additional routes in the US-Caribbean market, airlines are continuing to direct fresh resources to this vital market. So far logged in anna.aero’s New Route Database are a further nine routes still to be launched over the next six months.