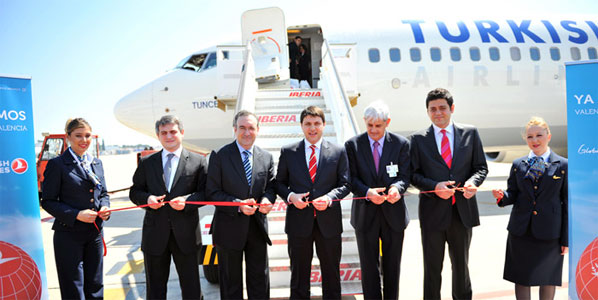 Following its launch of Valencia in March last year, Turkish Airlines will rub salt into the wounds of a floundering Iberia (which recently announced it is terminating its Madrid-Istanbul operation on 12 January) with plans to add Alicante and Seville to its five existing points in Spain.

Following on from this week’s Top Story – The big leak: Which airports are on Turkish Airlines’ route network shopping list? – anna.aero sources have been in touch again to reveal nine further spokes that are on Turkish Airlines’ drawing board for 2013. Again, following the methodology that some European markets are just too small for a MEB3 A330, Turkish Airlines is looking to add two further routes in Spain —namely Alicante and Seville — rubbing further salt into the wounds of floundering Iberia which recently announced it is terminating its Madrid-Istanbul operation on 12 January.  These will be destinations six and seven in Spain from the carrier’s Istanbul GMH, complementing existing flights to Malaga, Barcelona, Bilbao, Madrid and Valencia. This planned expansion is coming despite the fact that the three Spanish routes surveyed in this week’s report recorded the lowest load factors of all the routes that anna.aero analysed.

The final European route which has been revealed to anna.aero is Rotterdam, Turkish Airlines’ first regional airport in the Netherlands, which will operate daily alongside its four times daily service into Amsterdam. However, more direct competition will come in the form of Transavia, which is planning a three times-weekly service to Istanbul Sabiha Gökçen next summer.

Africa features twice in Turkish Airlines’ growth plans, with flights on the cards to the capital of Chad, Ndjamena as well Juba, its first destination in Southern Sudan. Both points are well within the capabilities of Turkish Airlines’ single aisle fleets. These aircraft will probably also be used on its expected operations to Mazar-i-Sarif in Afghanistan (its second point in this country) Lankaran on the Caspian Sea coast in Azerbaijan, and Kathmandu in Nepal. However, the longer legs of some wide-body metal will be required for Kuala Lumpur when it launches.