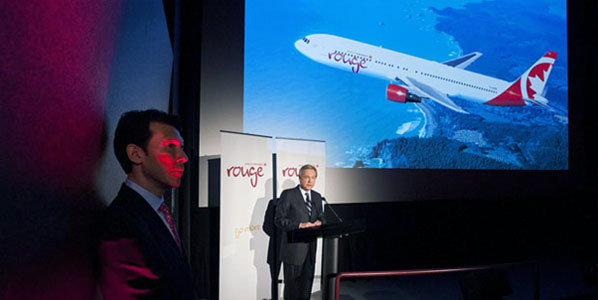 Launching on 1 July 2013 from Toronto and Montreal, Air Canada rouge will begin operations with two 767-300ER and two A319 aircraft that will be released from Air Canada’s mainline fleet. rouge flights will be offered to Athens (replacing its existing mainline summer-only operation), Venice and Edinburgh in Europe, as well and sun destinations in Cuba, Dominican Republic, Jamaica, and Costa Rica.

Ben Smith, Air Canada’s chief commercial officer, said the chosen destinations are to leisure points where demand for travel has been growing, but which didn’t generate adequate revenue under the airline’s existing cost structure. “The creation of this carrier is to assist us in serving many destinations that our existing model does not work on a competitive basis,” Smith said. “This is not viewed as entering markets that we haven’t been in in the past, they are markets that we’ve always liked to serve, some we’ve already served in the past, we just had to have the right vehicle to exploit them properly.”

Will seasonal services be next to be “rouged”?

Summer 2012 saw Air Canada fly to 13 destinations in Europe from Toronto and Montreal, however many of these routes are only flown on a seasonal basis due to a lack of year-round demand. With an all-leisure, long-haul product Air Canada decision makers may well be considering its European summer–only routes as ideal service prospects to be converted to its new rouge offer.

By contrast, rouge’s main competitor between Canada and Europe, Air Transat, offered 27 destinations (more than double those offered by Air Canada) from Toronto and Montreal last summer. Notably, Air Transat offered flights from both Montreal and Toronto to Athens and Venice last summer. Clearly this is the market opportunity that rouge is looking to grasp.

rouge hopes to avoid Tango and Zip flight into the red

This isn’t Air Canada’s first venture into all-leisure territory. It launched Tango and Zip as short-haul low-cost carriers in 2001 and 2002, respectively. But both were shelved by 2004. In terms of an all-leisure, long-haul service, Gulf Air tried its hand in this market with its Traveller offer, which started in 2003 and lasted until 2007.