Will this man sour relations between China and Japan? Shinzo Abe, Japan's new Prime Minister has vowed to take a tough stance in territorial disputes with China; if relations do deteriorate this could potentially upset China Eastern Airlines’ biggest international market.

In its most recent full year results, China Eastern Airlines reported carrying nearly 70 million passengers, up 6% on the previous year, which was itself an increase of almost 47% on the year before that. This means that in the last six years, the Skyteam carrier has almost doubled in size. Despite impressive growth of 10% and 6% in its international and domestic passengers, the Shanghai Hongqiao headquartered airline has seen its regional traffic fall by 5% between 2010 and 2011. 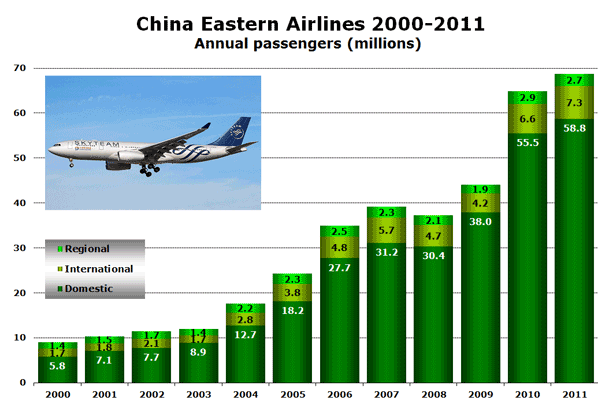 Over one-third of China Eastern’s weekly seats of nearly 1.5 million are delivered from its four hubs of Shanghai Hongqiao, Shanghai Pudong, Kunming and Xi’an airports, with its nine focus cities making up another 20%. China Eastern maintains its #2 position, with a 36% and 19% margin over Beijing-based Air China in third spot, in terms of weekly flights and weekly seats respectively. However, it would have to bridge gaps of 15% and 19% in these same metrics before it would put China Southern Airlines under any sort of pressure for first place.

While China Eastern lags China Southern by just one destination on their respective network maps, it currently flies to more international points than both of the other main Chinese carriers. Of those international services, it flies to more points in Japan and South Korea than its main competitors, however Air China leads the way on flights to Europe, flying to more destinations than the other two airlines combined. Notably, China Southern is the market leader to Australia, operating to four points – although China Eastern is the only one of the big three Chinese airlines to fly to Cairns in Queensland.

50% of international flights to Japan, Hong Kong and South Korea

Regional flying dominates the carrier’s international network, with the top six spots secured by countries in this market. Japan’s dominance is assured given that China Eastern currently flies to 14 points across the Sea of Japan. Only three countries outside of the region break into the top 12, led by the US which sees operations to four destinations – namely Honolulu, New York JFK, Los Angeles and Saipan in the Northern Mariana Islands. 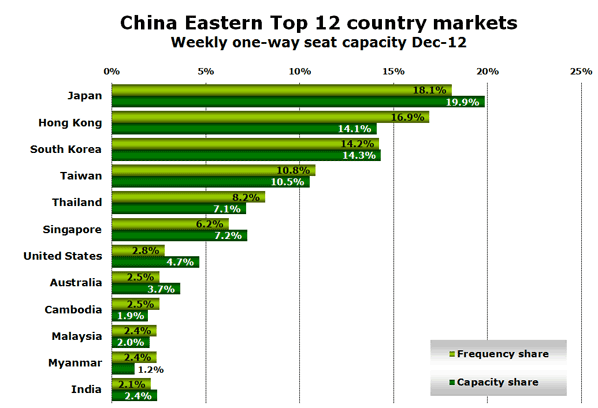