December 14 2012: Spectacular ice sculpture and cakes (as photographed by our friends at  www.aerotravel.info ) greeted the arrival of Qatar Airways’ 787 at London Heathrow. The airline’s CEO, Akbar Al Baker (centre) is flanked by Michael O’Neill, UK ambassador to Qatar, and Heathrow Airport CCO, Normand Boivin. (anna.aero has had several requests to extend the weekly Cake of the Week prize to ice sculptures, but none have so far passed our scrupulous tasting process.)

Qatar Airways started long-haul operations to London Heathrow with its new 254-seat 787-8 on 14 December, following four weeks of crew familiarisation flying to Dubai and Kuwait. The London hub became the 50th airport in the world to welcome 787s since commercial operations were launched in October 2011 with ANA’s inaugural service from Tokyo Narita to Hong Kong. Australasia is the only continent yet to be touched by the 787, however this gap in the aircraft’s global coverage will be resolved on 1 February, when Qatar Airways launches operations to Perth. 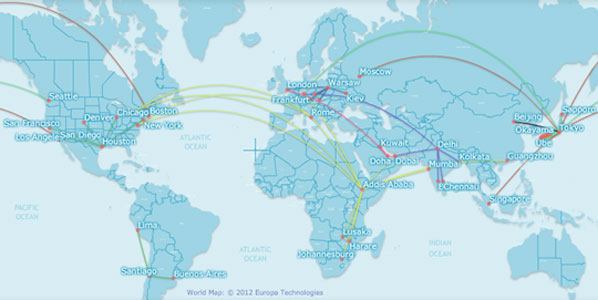 14 months after introduction, of the current 439 weekly services operated by the world’s 787 fleet, the average stage length is just 3,400km, less that 25% of the Dreamliner’s 15,000km capability. The longest sectors are Ethiopian’s Washington DC and Toronto services at 11,500km each. Source: Innovata FlightMapsAnalytics Dec-12

Eight airlines are using the 787 on 439 flights per week, with the home market of ANA and Japan Airlines generating nearly 60% of services presently. As a result, Tokyo’s Haneda scoops top spot in terms of weekly frequencies with 216. This is primarily driven by the fact that of ANA’s 212 weekly frequencies, 90% are currently on domestic sectors. However, this will alter slightly in January when the Star Alliance carrier launches its five weekly Narita to San Jose route. By contrast, all of Japan Airlines 39 weekly operations are on international routes, a point which will be further proven when the oneworld carrier starts its four weekly Dreamliner flights between Narita and Helsinki on 25 February. 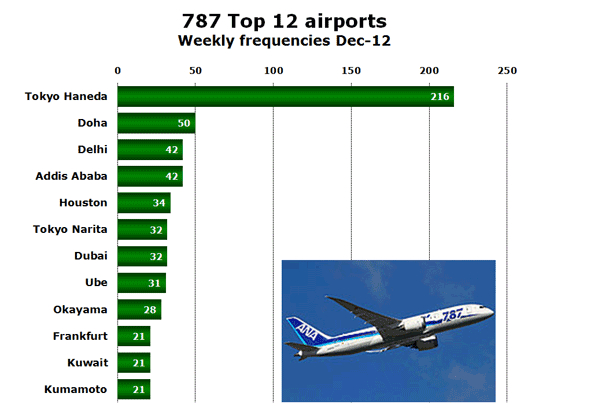 Dubai leads the way in terms of the highest number of weekly flights from an airport which is a non-787 base, while Frankfurt takes #1 spot in Europe for visits from Boeing’s new flying machine, a position that will be further augmented when LAN Airlines’ mooted route from Lima to the German hub starts, in addition to Los Angeles and Madrid. Warsaw will also start to climb the frequency leader board when LOT Polish Airlines begins its planned long-haul services to Beijing, Chicago, New York JFK and Toronto.

When Boeing rolled out the Dreamliner at its Everett plant in July 2007, the aircraft’s efficiency and 14-15,000 kilometre range were being keenly promoted by the manufacturer in helping the US company to secure the 677 aircraft orders on its books. However, 14 months into operational service, the aircraft is yet to be taken to the edges of its performance envelope.

Having initially started commercial services to Dubai and Johannesburg, Ethiopian Airlines is currently leading the way in terms of using the aircraft’s full range capabilities, taking first and second spot. However, from 16 December until 31 January, the African airline will temporarily place the 787 on its Beijing route, instead of Guangzhou, which at 8,336 kilometres would have knocked United Airlines’ Houston-Amsterdam from fifth spot.

New aircraft types need time to be adopted into any airline’s fleet, with fresh engineering challenges to be faced, and the 787 is no exception. The introduction of a new aircraft type also gives the operating airline the opportunity to showcase a new interior product, and often as a result the routes that are flown are from a cosmetic need rather than an operational one. The outcome of these differing priorities results in routes like Qatar Airways’ Doha-Dubai being flown – flying less than 3% of the Dreamliner’s intended mission range in order to show Emirates just which MEB3 carrier has the nicest new plane. Of the current 439 weekly services being operated by the world’s 787 fleet the average stage length is just 3,411 kilometres, less that 25% of the aircraft’s true capabilities.

Over the coming months these statistics look likely to change as the operating airlines grow more confident in the 787’s long-range performance. For example, United has two 10,000 kilometre plus routes in its plans – namely Houston-Lagos and Los Angeles-Shanghai. Of the 172 weekly Dreamliner frequencies currently filed for the start of the S’13 flying programme, the average stage length has doubled to over 6,800 kilometres, although this is largely to do with the fact that many of the shorter sectors – Japan Airlines and ANA’s domestic flying, as well as Qatar Airways’ flights around the Middle East – are yet to be submitted to the schedule databases.