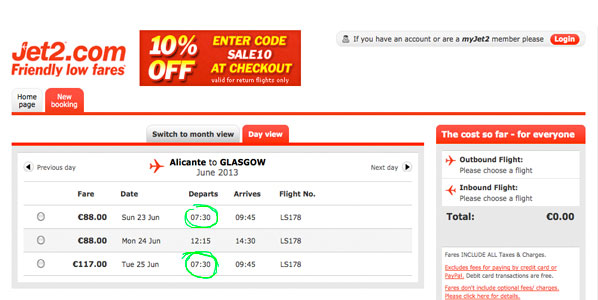 Circled are two of the six flights that tell us that Jet2.com is starting a base in Alicante this summer

Some flights are already on sale, but they are yet to be publically announced; crews are enlightened, but the network planning community is still in the dark —however, anna.aero can exclusively shed light on the fact that Jet2.com is becoming the next airline to look overseas for its next base rather than in its home UK market. This decision to base two 148-seat, 737-300 aircraft in Alicante may come as a blow to UK airports like Birmingham, Bristol, Cardiff, Liverpool or London Southend which were looking to become Jet2.com’s ninth UK base. But will Jet2.com rue its decision like Norwegian’s Warsaw experiment or Aer Lingus’ London Gatwick foray, or will it be pats on the back all round when it becomes truly pan-European like Volotea or Wizz Air?

Clearly there is a lot at stake for Jet2.com in this market; it is already the number two player on UK-Alicante operations with all eight of its bases currently seeing at least three flights per week, based on June 13 Innovata schedules. easyJet is king of this market with services from 11 UK airports to Alicante and perhaps has the most to lose from Jet2.com’s decision. 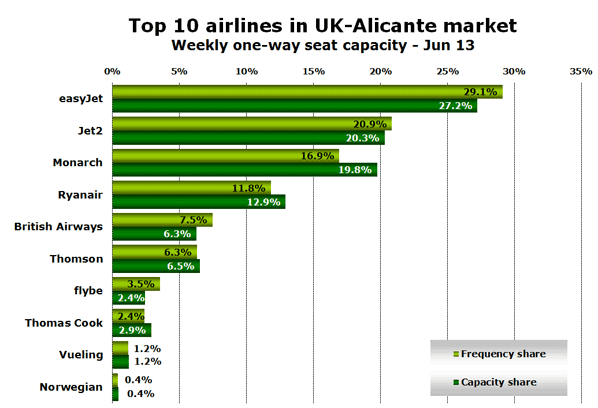 Currently Jet2 has only placed six flights to four of its existing UK airports on sale from its Alicante base. These are being used on a 50/50 mixture of additional rotations as well as replacing previously UK-originating flights as indicated below.

With the potential for at least two flights per day, per aircraft there could be at least 22 weekly frequencies potentially still up for grabs to prospective new and existing UK destinations. Should this capacity be used in the same 50/50 mixture of generating new and replacing existing frequencies, Jet2.com would narrow the gap on easyJet in the UK-Alicante market, offering 67 weekly frequencies versus the Luton-based airline’s 74.

Looking at Jet2.com’s existing network, Alicante is currently its second biggest destination (53 weekly frequencies). Slightly larger is Palma de Mallorca with (57) – could this be the next potential base for Jet2.com if Alicante becomes successful? Other options for the low-cost carrier could be Málaga, Faro, Ibiza or Murcia, all of which generate over 30 weekly services during the peak summer season from the UK.

Presently the base seems to be summer-only, with Alicante-originating flights ending in October and it is unclear whether operations will continue through the winter. Of course Jet2.com’s plans for these aircraft may lie with operations to other European or indeed North African points rather than flying entirely to the UK. Whatever happens, anna.aero will bring you the information first.