Hallo Hallasan: Jeju is home to South Korea’s tallest mountain Hallasan, one of the island’s many tourist attractions which lures millions of Korean holiday makers each year onto Jin Air and fly on the world’s busiest air route. Or is it because of the haenyo (or the sea women) representing the matriarchal social structure of the island?

Jin Air, wholly owned low-cost subsidiary of national flag carrier Korean Air, broke through the three million annual passenger mark for the first time in 2012 — quite an achievement for a carrier which celebrates its fifth birthday in July. Much of the airline’s growth in the last 12 months has been driven by its divergence from the standard low-cost model into charter services — or ‘casual’ flights as they are referred to on the Korea Airports Corporation website. In 2012, over 600,000 or 20% of Jin Air’s passengers were flown on these ‘casual’ routes, representing a significant surge from the 100,000 or 4% totals of 2011. Indeed, the airline had never carried more than 4% of its annual passengers on charter operations before 2012. This diversification of its flying programme is similar to the morphing of business models increasingly followed by many of the world’s low-cost airlines in order to spread revenue streams and decrease reliance on the direct selling of seats to the public. 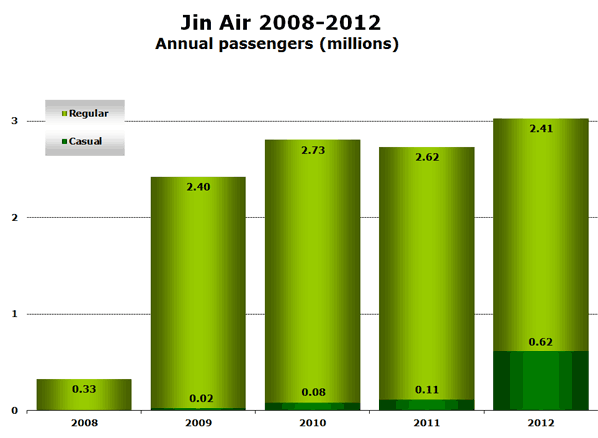 Growth to Japan, Thailand and Laos

Jin Air fulfils two key strategic priorities for its parent, offering a low-cost alternative to the flag carrier and the four other low-cost carriers in South Korea, while also allowing the group to expand into routes where there is perhaps significant leisure demand but little or no business traffic to justify a service from Korean Air itself. Despite competing on nearly 40% of its routes directly against Korean Air, this dual-headed strategy is reflected in its network, as Jin Air flies routes like Jeju to Shanghai Pudong and Taipei, as well as Seoul Incheon to Macau, Yantai in China and Vientiane in Laos – none of which are flown by the mother carrier. Route turnover is relatively low at Jin Air with only two of the 15 routes launched since its start-up being cancelled, namely from Busan to Seoul Gimpo and Jeju. 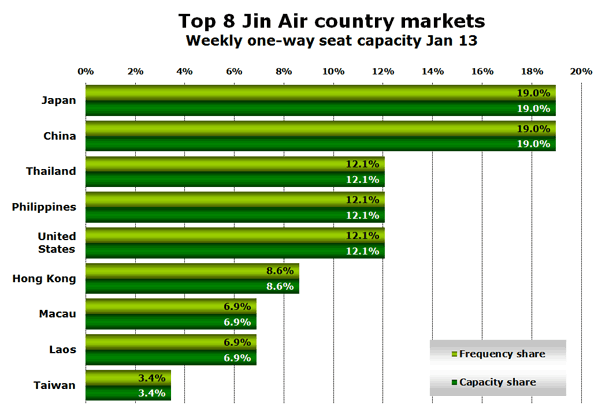 The above chart demonstrates a little known virtue of a single aircraft, single configuration fleet — your weekly frequency share is always equal to your weekly capacity share. Japan tops the table along with China, but only as a direct result of the launch of the carrier’s latest daily new route from Seoul Incheon to Okinawa on 24 December — its fourth new route in 2012. Capacity to Thailand will briefly pull away from that flown to the Philippines and United States (Guam) between 26 December and 2 March as its Seoul Incheon to Bangkok operation will increase from daily to nine weekly. In addition, Laos will jump over Hong Kong into sixth spot during 22 December and 6 March while operations from Seoul Incheon to Vientiane increase from four to six weekly flights.

#3 on the world’s busiest route

With over 10 million annual passengers, Seoul Gimpo to Jeju looks set to hold its title of the world’s busiest air route in 2012. Looking at January 2013 Innovata data, its closest competitor, São Paulo Congonhas to Rio de Janeiro Santos Dumont, lags 30% behind the Korean route monster in terms of weekly seats and frequencies. It is therefore no surprise that 60% of Jin Air’s weekly flights and seats are dedicated to serving this route, enabling it to become the number three carrier on this truly mega route pair. Bizarrely for a domestic service, the route does not even link the country’s two biggest cities – indeed Jeju is not even in the top 20 largest cities in Korea. Jeju Island is a holiday hot-spot with no peers for Koreans and this is the reason for the huge quantities of weekly operations by the route’s six serving airlines. 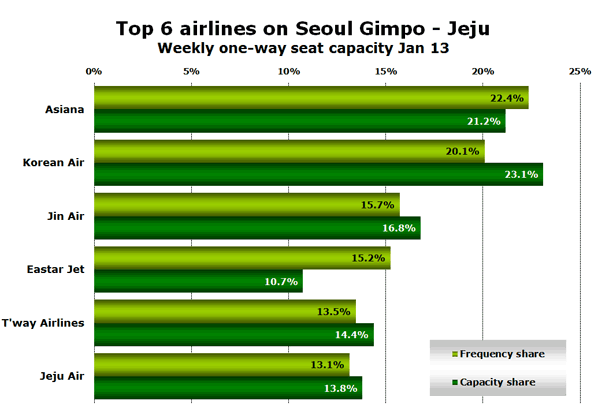 While Asiana Airlines leads the pack as a single entity, a combined Korean Air and Jin Air delivers close to 40% of this critical market, but this is a far cry from the 60% of frequencies and 70% of seats that the flag carrier had in January 2008 prior to Jin Air’s launch and the merciless encroachment of low-cost competition. Even this route pair has not been immune to Jin Air’s shift to more ‘casual’ flying. Total charter traffic between Seoul Gimpo and Jeju has nearly doubled between 2011 and 2012, from 4% to 8% of total passengers, however Jin Air’s ‘casual’ traffic on the route has increased by over 800% in the last 12 months to nearly 300,000 annual passengers.