Riyadh: International traffic more than doubles in a decade; new services from Shaheen Air and SpiceJet 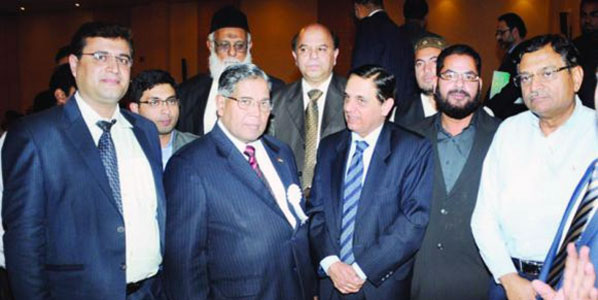 Newly arrived: The launch of Saudi service by SpiceJet in early January was assisted by the Indian Minister of Minority Affairs, K. Rahman Khan, who was ending his visit to the Kingdom. Kamal Hingorani, SpiceJet’s VP, who briefed Khan during the evenyt in Riyadh, said: “As a branded airline, we look forward to a long sustained relationship with Saudi Arabia and our partners in this country.”

Situated in the centre of the Arabian Peninsula, Riyadh King Khalid International Airport serves the capital of Saudi Arabia – urban centre of a region with a population of almost seven million. Inaugurated for operations in 1982, the airport has four terminals as well as one of the world’s highest ATC towers. Four new routes were launched in Riyadh in the first week of 2013.

Last decade saw commercial passenger traffic grow by 64.5% at Riyadh, a figure that corresponds with the trends in the region, and in 2011 (which is the last year, for which full traffic data is available from GACA) 14.8 million passengers travelled through the airport. 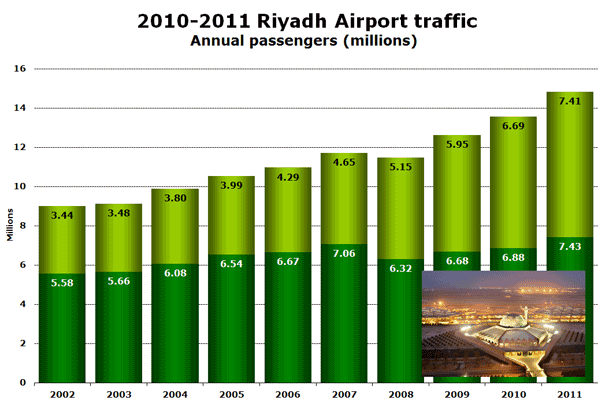 While the split between domestic and international segments is almost even, the latter has shown far more dynamic growth. Taking 2002 as base year, a 33.2% increase was noted in 2011 for domestic traffic, whereby the figure exceeds 115% for international. However, examination of year to year figures shows more moderate a difference (respectively 8% and 11%).

Dubai three times as big as the next busiest destination

While a total of 25 international destinations from Riyadh are served with at least daily frequencies, 15 of those offer twice-daily or more departures. Selection of 12 top international routes from the Saudi capital in terms of frequency includes almost exclusively regional routes with the notable exception of Delhi and Mumbai in India, and Istanbul in Turkey. 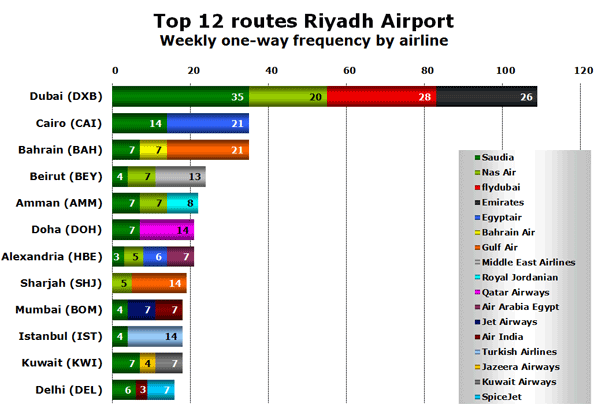 Located less than 800 kilometres to the east of the Saudi capital, Dubai is the busiest destination from Riyadh in terms of frequencies – Saudia, Nas Air, flydubai and Emirates provide a combined 109 weekly departures. This is three times as many as to the next busiest destination on the list, Cairo.

Unsurprisingly, Saudia (formerly Saudi Arabian Airlines) is the largest airline operating in Riyadh, and in January 2013, it will provide around 60% the airport’s total capacity. According to the half year figures published earlier in 2012, the airline grew almost 20% network-wide year to year, carrying more than 12 million passengers between January and June last year. In Riyadh, Saudia operates a network of 66 destinations, of which about a third are short domestic routings of up to 1,000 kilometres.

The only other airline to fly domestically from Riyadh is Nas Air, Saudi Arabia’s own low-cost airline, which offers services to five destinations across Saudi Arabia, including 43 weekly frequencies on the country’s busiest air route from Riyadh to Jeddah (on which Saudia offers 135 weekly departures). Having grown its weekly seat offering by 54% compared to the same month a year before, Nas Air provided 12% of Riyadh’s domestic capacity in January 2013.

First week of 2013 saw the arrival of the third Indian carrier to Riyadh with the launch of SpiceJet’s daily service from Delhi, but also brought about three new routes from Shaheen Air. A full analysis of those four launches is included in this week’s issue of anna.aero.

Following the early December launch of four-weekly services to Abu Dhabi, Alitalia is set to continue its Middle Eastern network expansion from Rome Fiumicino in 2013 with services to Riyadh scheduled to launch in late March. However, the launch date for this service, which was originally announced in March 2012 and scheduled for 1 June, has already been postponed at two occasions.