World’s airlines already announced over 900 routes for 2013; Barcelona Airport #1 in the world for new services 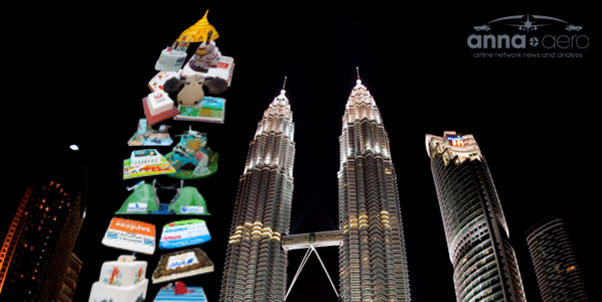 471 metres of cake! With 911 routes already in the new route database there are potentially 1822 new route cakes out there ready to be created. If all of those cakes were stacked on top of each other, with an average height of 26 cm per cake (thanks to our data elves for that stat) that would be a cake bigger than the Petronas Twin Towers in Kuala Lumpur, which are only 452 metres high.

Fronting the new route charge (again) is Ryanair with some 77 additional services already planned to start this year — up 17 on last January. This does not include the resumption of seasonal services which the airline rather confusingly also lists in the “New routes” section of its website. Unlike in 2012 when Lufthansa (it is just outside the top 12 this year with 17 new routes) ran Ryanair close, this year the #2 is Vueling with 48 extra routes planned, around 60% of which will be from Barcelona Airport, as the airline continue to fill the network gaps left by the demise of Spanair in January last year. 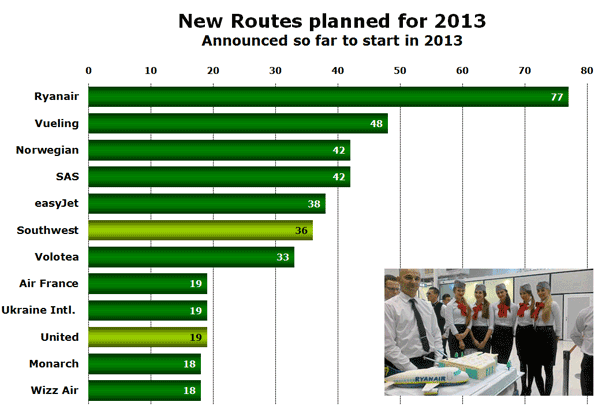 While European airlines take 10 of the top 12 positions (+1 on 2012), eight of the carriers remain unchanged versus a year ago, with low-cost newcomer Volotea, as well as Ukraine International Airlines, United Airlines and Wizz Air ousting Lufthansa, Delta, Jet2.com and US Airways. In total, we have so far identified 150 airlines that plan to launch new services in 2013. This list will no doubt lengthen as the year progresses, and pan-African airlines like new start-ups Gambia Bird or FastJet may yet break into the top 12 if they grow as rapidly as anticipated.

US leads way with most new routes followed by UK

With each route involving two airports (one at each end of the route), we have determined which are the leading countries for new route development. Not surprisingly, given the scale of the market, US airports feature 244 times (out of a possible 1822 times), followed by the UK airports. Spain and Italy have jumped ahead of Germany in 2013, while France remains #6, and in a bizarre coincidence, has the same total of 116 routes in the new route database as it did in 2012. These are the same six countries that led the way in early 2011 and 2012. 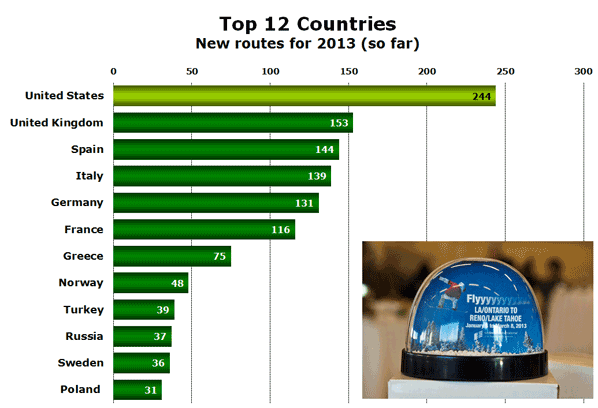 Barcelona top of the league (so far…)

Not only is Barcelona FC nine points clear (as at 04/01/13) of Atletico Madrid at the top of La Liga, but Barcelona Airport is nine new services clear of its nearest rival Copenhagen in the global route development league. European airport business development teams dominate so far in 2013, with their nearest global rival being the US’ Dallas/Forth Worth which has 14 new routes logged in the new route database to start over the next 12 months. 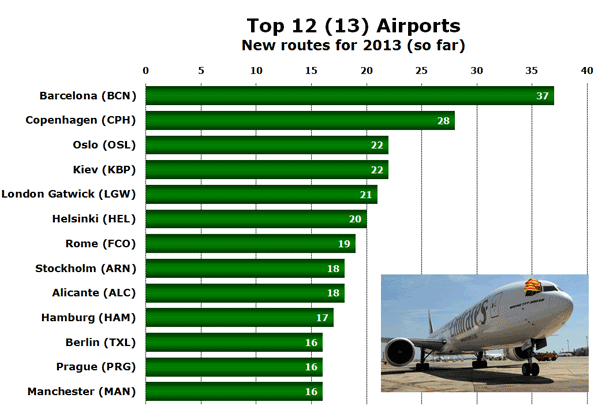 While over 50% of London Gatwick’s planned extra services are driven by Norwegian’s new base which is scheduled to become operational in the spring, nearly 90% of Kiev Borispol’s additional routes is down to home-based carrier Ukraine International Airlines. With AeroSvit filing for bankruptcy last week, the Ukrainian hub will become even more reliant on the nation’s flag carrier to deliver growth. The other performance of note is that of Berlin Tegel, which despite ongoing uncertainty over the opening date of the Berlin Brandenburg facility, is still expecting a healthy tally of new routes in 2013.

The staggering haul of 900 additional services for 2013, straight off the back of the record-breaking new route tally of 2012 is a clear indication that the world’s airlines continue to further strengthen their respective networks despite an economic gloom that is proving more difficult to shift than airport fog. Whatever happens, anna.aero will be bringing you the latest data, news, analysis and pictures during what will no doubt be yet another eventful year for our industry. And of course…lots and lots of cakes!