El Salvador: Traffic up 3% in 2012; new services from AeroMéxico and United 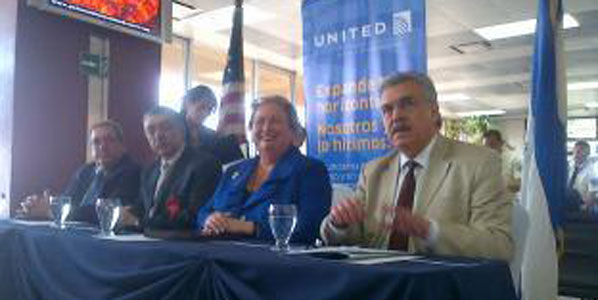 El Salvador’s Tourism Minister, José Napoleón Duarte; CEPA’s President, Alberto Arene; US Ambassador to El Salvador, Mari Carmen Aponter; and United’s Director General Sales, Salvador Marrero, held a joint conference to mark the route launch. Duarte underlined that “the country’s open skies policy brought about a spate of new services, including those from Iberia and Spirit Airlines”. The low-quality image was kindly provided to us by the US Embassy in San Salvador.

Located on the Pacific coast of Central America, El Salvador is the region’s smallest and most densely populated country, boasting a population of just over six million, mostly concentrated in the San Salvador metro area. Serving the country is only one airport, San Salvador International, which is also Central America’s third-busiest facility after Panamá and San José in Costa Rica.

From January to October 2012, 1.72 million passengers used San Salvador, an increase of 3% in the same period of 2011, setting the airport on a good track to achieve its third consecutive year of growth. Owing largely to Taca´s hubbing operation at the airport, which provides roughly for a third of traffic, the demand profile throughout the year is fairly flat, with only a minimal spike during July and August. At the same time, having a large reliance on the Taca Group (Taca and LACSA together provide 77% of San Salvador’s weekly seat capacity) means that the airport suffered significantly from the 2008 economic slowdown with figures down by 7% in 2009. 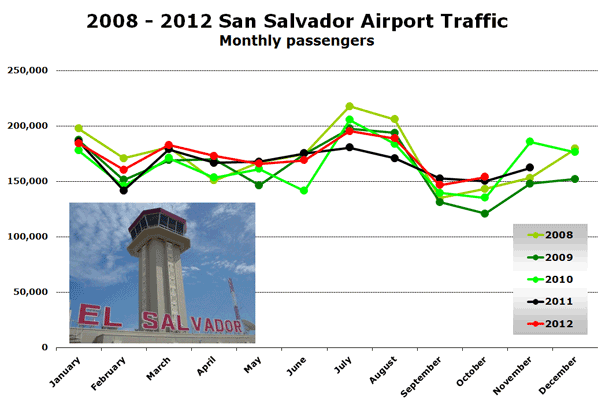 However, Taca’s further expansion seems to be closely tied to future capacity growth at the airport, which currently functions close to its operational maximum. While the authorities plan for a public-private partnership to fund the upgrades, AviancaTaca does not exclude relocation. Last year, the group’s EVP, Estuardo Ortiz, commented: “Little by little, Taca’s needs are outgrowing the capabilities of its current hub. We expect the government to come up with a viable master plan in the next five years; otherwise we would have to consider other locations, possibly in Guatemala or Costa Rica”.

Madrid the only destination outside of the Americas

While Taca remains the dominant carrier in El Salvador, with the current destination count clocking in 28 routes, the country works on increasing the coverage of open skies-type agreements. Tangible results of this strategy include San Salvador’s only European service to Madrid: Iberia’s four-weekly flights were launched in October 2010 and have so far not been affected by the company’s internal struggles (including the recently announced route cuts affecting neighbouring Costa Rica). 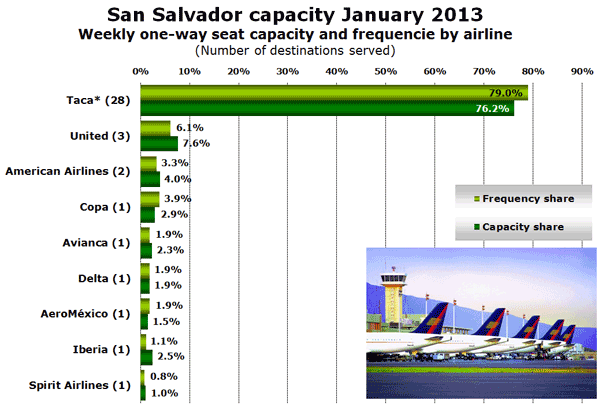 The US is the largest market from El Salvador with a total of 12 points served by Taca and four US carriers. With at least thrice-daily flights available, Washington Dulles, Houston and Los Angeles are the busiest destinations. United is the new kid on the block, as it took over Continental’s services to Houston and Newark (the latter with halved frequencies) last year, and launched Washington Dulles in mid-December.

AeroMéxico and United with new routes; Etihad coming next?

Last year also saw the launch of five new routes in San Salvador, including three regional destinations from the airport’s home carrier, Taca. Apart from United, AeroMéxico was the only foreign carrier to set up shop in San Salvador with the addition of daily flights to Mexico City. This daily service is the eighth ex-Mexicana route to be picked up by AeroMéxico.

But as El Salvador concludes more open skies agreements, it is likely its long-haul offering will improve. Notably, in late October 2012, the country knocked out a deal with the UAE, it will therefore be interesting to see which of the countries two long-haul airlines, Emirates or Etihad, will consider putting San Salvador on its route map first.