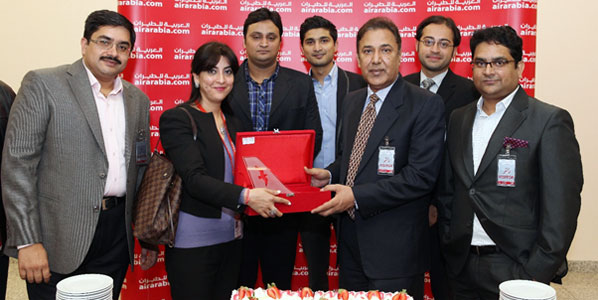 More Air Arabia-fuelled growth at Sharjah, as the carrier launched its third destination in Pakistan, Sialkot on 10 January. Pakistan is the airport’s third largest country market, behind Saudi Arabia and India.

2012 has become a notable year for Sharjah Airport, the airport serving the UAE’s third biggest city, as it breaks through the seven million annual passenger mark for the first time in its history. Capital of the Emirate of Sharjah, one of the seven Emirates which are the constituent states that form the UAE, Sharjah has taken just two years to move from six to seven million annual passengers, having previously taken the same time to break through the five to six million passenger milestones. Much of this growth has been fuelled by local low-cost carrier Air Arabia, which according to Innovata data for January 2013, provides around 80% of weekly frequencies and seats, with its 25 based A320s. 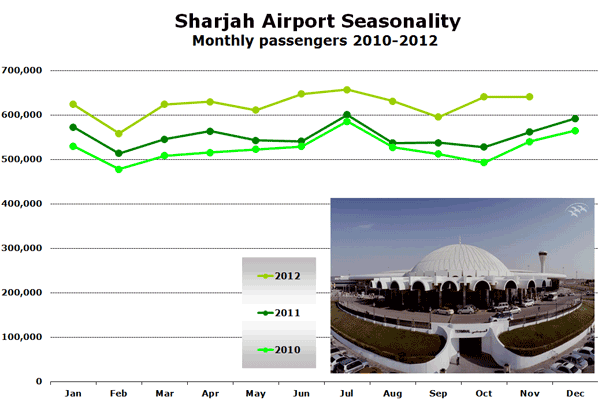 During the last 12 months of available data, passenger flows at Sharjah peaked at 657,000 during July 2012, but only fell to 558,000 in February 2012, representing a variance in monthly traffic of just 18%. Just two years ago, this variance was 23%, so the airport will no doubt be benefiting from this stability in passenger flows in terms of providing facilities and resources. It has some progress to still make to get to the 13% monthly traffic variance which is found at the similar-sized Adelaide Airport and recently covered by anna.aero.

Not surprisingly for an airline that commands 430 of the 544 of all weekly frequencies at Sharjah, Air Arabia is present in all of the top 12 routes operated from the airport. Capacity on its routes to Delhi (+100%), Jeddah and Riyadh (both +75%) have grown significantly in the last 12 months, while monopoly routes to Dammam and Kuwait City have both been increased to thrice daily, a fact which may well draw competition onto these routes. 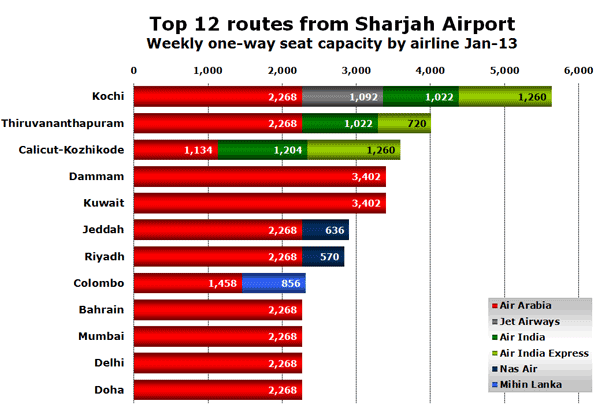 Weekly flights on the airport’s busiest and most competitive route (with four serving airlines), the 2,800 kilometre sector to Kochi, has only increased by three (from 32 to 35 weekly) thanks to a frequency rise from Air India Express in the past year. Meanwhile, Mihin Lanka’s capacity to Colombo was increased to four times weekly just last month.

India is #1 at Sharjah

With five of the top 12 routes in terms of capacity being to India, its perhaps of little surprise that it is this nation that leads the way in terms of country markets, and that it is double the size of the #2 market — Saudi Arabia. The airport’s network currently boasts 73 destinations, having grown 7% since January 2012, which is just 17 destinations behind Abu Dhabi, but less than half the size of Dubai (189 destinations). 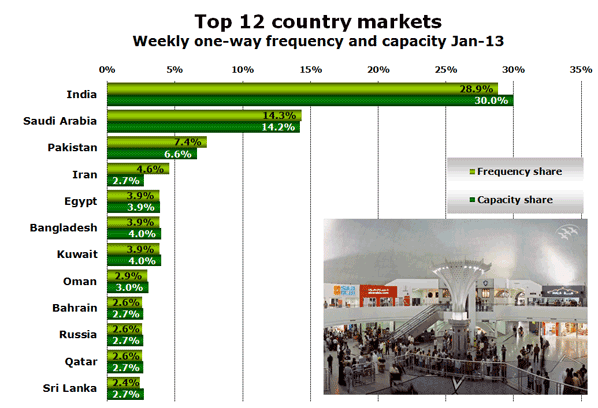 Clearly Sharjah’s network has a regional focus, with an average sector length of just 2,181 kilometres versus the more global destinations boasted by Abu Dhabi (3,665 km average sector length) and Dubai (4,022 km). It is unclear which of these country markets are likely to grow over the next year or whether new countries will emerge, as currently there are no new services in anna.aero’s new route database so far for Sharjah in 2013. However, an Air Arabia spokesperson did confirm the following: “We will definitely be launching new routes but will be announcing them in due course.”

Using RDC’s airportcharges.com, it is clear to see that Sharjah has priced itself competitively, compared to its bigger cousins at Abu Dhabi and Dubai. Its total airport charges for a 300-seat A330-300, filled to an 80% load factor, are around 4,500 euros, exactly the same rate as those levied at Abu Dhabi, but some 7% cheaper than at Dubai. Total charges per passenger are therefore the same at 18.72 euros for Sharjah and Abu Dhabi, representing nearly a 1.40 euro saving versus those to be paid in Dubai. Having priced itself competitively, Sharjah will no doubt have its sights firmly set on the eight million passenger mark over the next 24 months.