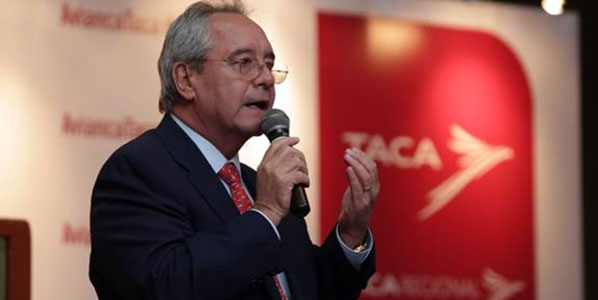 During a conference held in late 2012, Roberto Kriete, AviancaTaca’s Chairman, announced the long-awaited decision on the merged airline’s branding: “The TACA brand will disappear in the first half of 2013, as we adopt Avianca’s branding for all our operation.”

The conglomerate of regional airlines of Central America gathered under the umbrella of the national airline of El Salvador, TACA Group includes LACSA (Costa Rica), La Costeña (Nicaragua),  Isleña (Honduras), SANSA (Costa Rica) and TACA Perú, all of which are independently owned and coded. All six, together with a number of further regional code-share partners, feed to the branded system. Moreover, in 2010, TACA Group undertook a merger with Colombian Avianca, going on to create the AviancaTaca Holding. Now in third year of the partnership, the integration effort nears completion: mid-2012 saw the airline officially join Star Alliance and the TACA brand is soon to be phased out in favour of Avianca – the stronger of the original airlines. 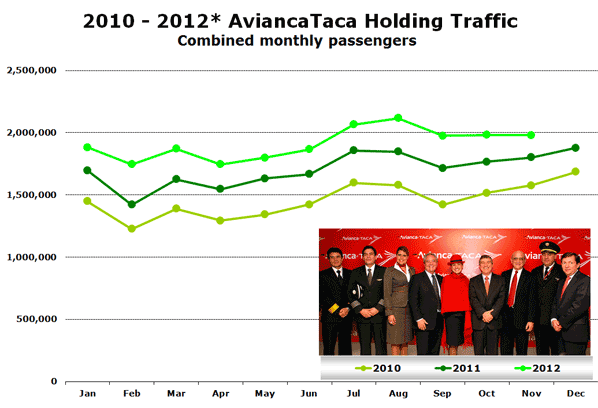 Following the 16.8% growth in 2011, AviancaTaca (for which traffic data is published jointly since the merger) noted an increase of 13.2% in the period from January to November 2012. Notably, domestic services outpaced international, as they grew by 21.1% in the first three quarters of 2012, compared to 5.3% for international traffic.

San José the largest by frequency; Lima – by seat capacity

The three leading airlines within the TACA Group (TACA, LACSA, and TACA Perú) also represent the airline’s three major connection centres. While Costa Rican San José is the largest in terms of weekly frequencies offered (15.2%), Lima leads in terms of both weekly seat capacity (19%) and the number of destinations served (32). TACA’s original base in San Salvador, which is analysed in a separate feature in this week’s anna.aero, is currently the airline’s second largest hub. 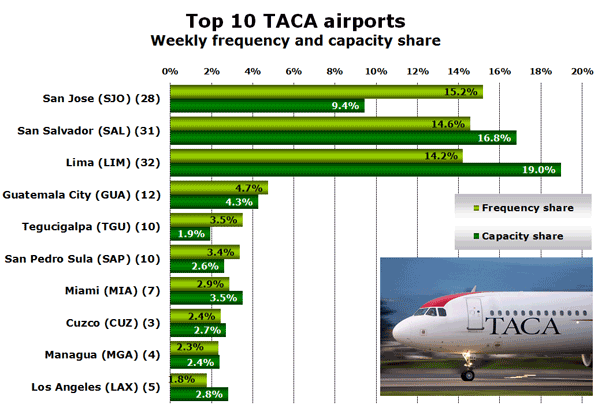 Comparison of growth dynamics for the three main TACA hubs shows how the airline’s gravity is shifting towards Perú, where the AviancaTaca faces it arch-rival LAN (which itself will soon fully merge into LATAM). In January 2013, Lima is the fastest-growing TACA centre in terms of weekly seat capacity, as 12.4% more seats are allocated there this month than in the same period last year. This corresponds to an increase of 3.4% in San Salvador, and a decrease of -6.1% in San José.

A total of five routes have been launched by TACA since January 2012; all involved two of the airline’s largest hubs in San Salvador and Lima, and all but one involved destinations in Colombia, the home market of TACA’s partner airline, Avianca. While no new route announcements have been made for 2013, the airline has indicated that further growth in San Salvador could be jeopardized by capacity restrictions at the airport.