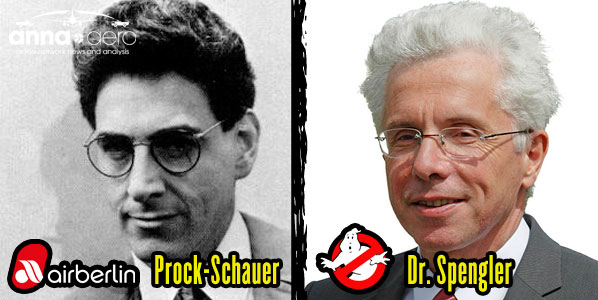 Have you noticed the astonishing resemblance between the new airberlin CEO, Wolfgang Prock-Schauer, and Egon Spengler, the genius doctor from cult 1980s movie Ghostbusters? However, the similarities are only superficial – the blockbuster was one of the top 10 highest-grossing films of all-time, whereas airberlin hasn't posted a profit since 2007. Prock-Schauer certainly has to slay a few more ghosts (and 900 jobs) before the airline returns to health.

The new year saw some significant management changes at airberlin. Hartmut Mehdorn, the airline’s “temporary” CEO (since September 2011) stepped down and Wolfgang Prock-Schauer, who joined the airline in 2012 (having previously worked for bmi British Midland, Jet Airways and Austrian Airways), was promoted to CEO. Around the same time Niki Lauda, founder of airberlin’s Austrian subsidiary NIKI stepped down as a non-executive Director from the board to focus on his racing commitments with Mercedes and was replaced by Austin Reid, who spent 20 years at bmi British Midland between 1985 and 2005. Meanwhile the airline is more than a little cheesed off with the still on-going delays to the opening of the new airport at the airline’s home in Berlin.

Last year airberlin transported 33.3 million passengers (down 5.5%), but saw load factor climb 1.6 percentage points to 79.8%. However, this increase in load factor appears to be because the airline is using the ratio of seats available to seat capacity, rather than the more normal ratio of RPK (Revenue Passenger Kilometre) to ASK (Available Seat Kilometre). The airline’s fleet size at the end of September was 158 aircraft, 12 less than at the same point in 2011, spread across five main aircraft types; 10 Q400s, seven E190s, 69 A320-series, 58 737s, and 14 A330s.

Given the airline’s highly publicised “Shape & size” programme which is aimed at returning the airline to profitability (something it was little closer to achieving in 2012 than it was in 2011) anna.aero decided to focus on how the airline’s network “shape” for this summer compares with the same period in 2011. Comparing the first week in September in 2013 and 2011 reveals that at present the number of flights operated by airberlin and NIKI combined will be down by 5.1%, the number of seats on offer will be reduced by 2.5%, but capacity as measured by ASKs (which takes into account sector length) will be up 10.1%. As a result the airline’s average sector length will have grown almost 13% from 1,283 kilometres to 1,447 kilometres. This is a significant change in just two years and reflects the airline’s issues with the German aviation tax which has a proportionally higher impact on the domestic market.

Although the airline has publicly described its network strategy as being built around four bases (Berlin, Düsseldorf, Palma de Mallorca and Vienna) anna.aero has once again segmented the airline’s network into ten separate markets based on geographic traffic flows. The following graph shows how airberlin/NIKI’s network has shifted in the last two years in terms of share of weekly departures. 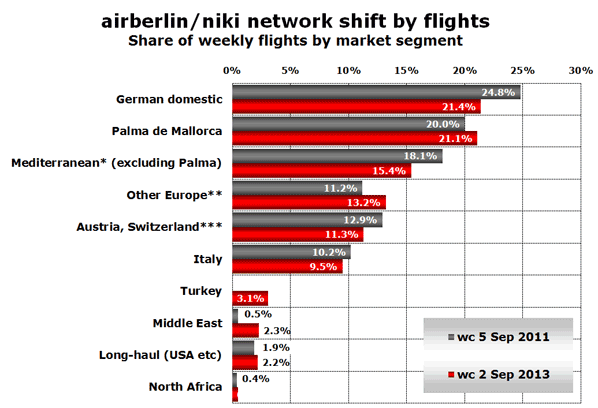 In terms of flights the German domestic market and flights to/from Palma each account for just over 20% of the airline’s network. airberlin’s domestic network has been cut with the disappearance of multiple daily services between Hamburg and Cologne/Bonn, Hamburg and Karlsruhe/Baden, and Hannover and Munich.

Two summers ago airberlin did not operate its own scheduled flights to Turkey. Now it operates scheduled flights to Antalya from 17 destinations; 13 in Germany and four in Austria. Another area of growth has been the Middle East, mostly thanks to the return of scheduled services to Egypt and in part due to increased connectivity with Abu Dhabi, home of airberlin’s new biggest shareholder, Etihad Airways.

Analysing how seat capacity is allocated across the 10 market segments reveals that flights to and from the airline’s Spanish base at Palma de Mallorca account for almost one quarter of all weekly seats in September. Palma’s share of total weekly seats has grown marginally while domestic routes and other leisure routes to Mediterranean destinations have fallen. 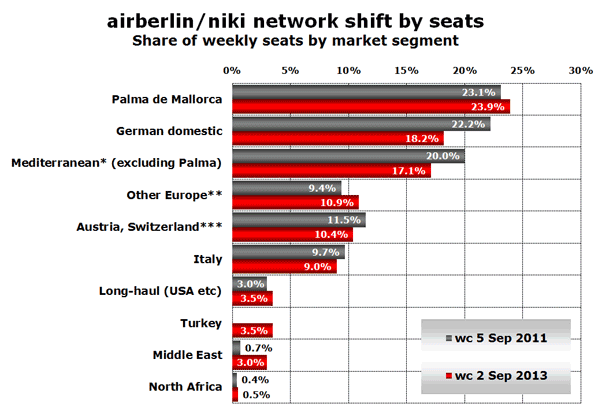 In terms of ASKs Mediterranean (non-Palma) routes have seen a significant reduction in their market share while the Middle East and Turkey have both seen their share of ASKs grow by more than five percentage points. Long-haul flights, primarily to seven destinations in the USA (Chicago O’Hare, Fort Myers, Las Vegas, Los Angeles, Miami, New York JFK and San Francisco) generate almost as many ASKs as flights to and from Palma. 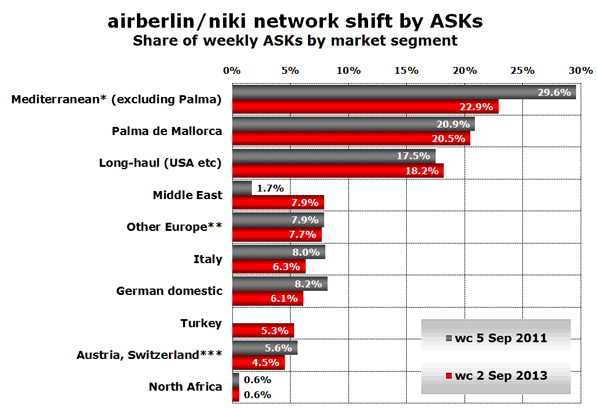 It is also worth noting that flights to and from the Middle East (Egypt, Israel and UAE) including the airline’s daily flights from Abu Dhabi to Phuket, generate more weekly ASKs than the airline’s entire German domestic network.

Berlin is focus of network growth in 2013; Vienna gets Greek routes

While consolidation and profitability are the key targets for 2013, airberlin/NIKI is still planning on launching a number of new routes during 2013 starting at the end of January with three new routes from Berlin to Bucharest, Madrid and Sofia. Two of these (Bucharest and Sofia) replace NIKI routes from the Vienna hub. To compensate NIKI will start new seasonal services to a number of Greek holiday destinations at the end of March.