A whopping 1,189 air frames were delivered to worldwide airline customers by Airbus and Boeing last year, turning 2012 into a record year. While the 2011 winner managed to further improve its performance, as it delivered 53 aircraft more than in the previous year, Boeing improved its delivery record by an astonishing number of 124 airframes, becoming the first manufacturer to pass the 600 annual deliveries mark. 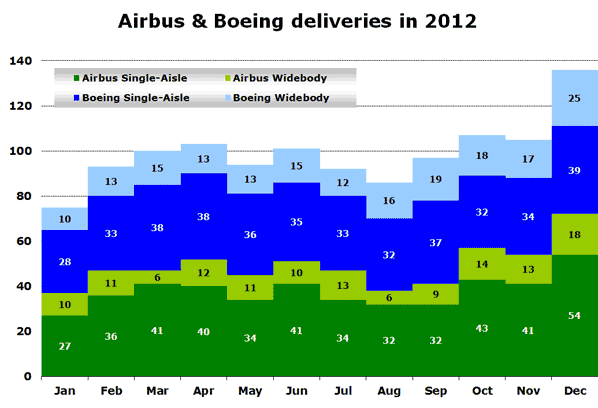 Interestingly, Boeing had a much more flat year, with both narrow and wide-body deliveries spread evenly throughout the year, the latter fuelled by the 787’s entry into production. For its part, Airbus had a couple of weaker months as the year progressed, but then stepped up its delivery rate establishing the new monthly delivery record of 72 units.

The European manufacturer remains the uncontested leader in terms of narrow-bodies and in 2012, it delivered 40 single-aisle units more than its US counterpart. In terms of wide-body air frames, Boeing recovered as the leader following two weak years, largely thanks to the acceleration of 787 deliveries; a total of 46 units of the type were delivered in 2012 making up a quarter of the air framer’s wide-body deliveries. 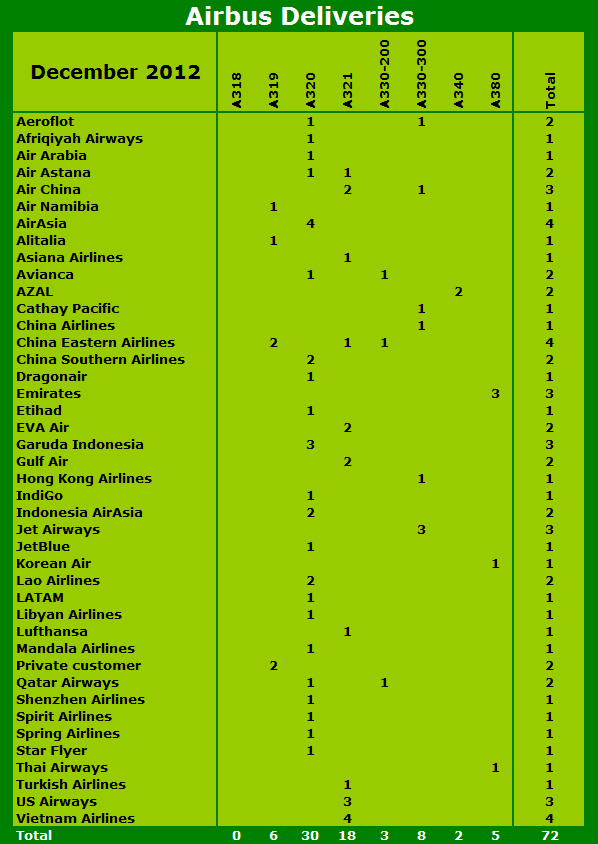 Airbus closed the month with a total of 72 delivered units, which signifies a steep increase of 18 aircraft over the preceding month of 2012, and 15 units more than in December last year.

Once again, deliveries in December were led by the A320 family, with a total of 52 of these single-aisle jets provided to airlines worldwide. AirAsia, which together with its Indonesian offshoot was the largest recipient of the type, took a total of six units, including the first ever with fitted sharklets. Garuda Indonesia took delivery of four A320, while Vietnam Airlines and US Airways received respectively four and three A321s.

18 wide-bodies were delivered in December, five more than in the preceding month. Following last month’s delivery of three A380s, in December, Airbus repeated its top result from October in terms of A380 deliveries with Emirates receiving three units of the Superjumbo and both Korean Air and Thai Airways each taking one. India’s Jet Airways was the only other carrier to receive more than one wide-body air frame from Airbus in December, as it incorporated three A330-300s in its fleet. 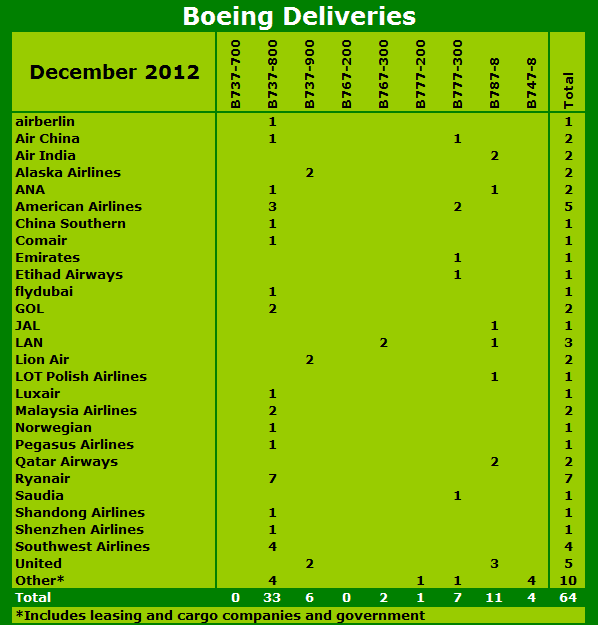 Boeing closed December with a total of 64 units delivered, 13 more than both in the preceding month and in December 2011.

Airlines received a total of 39 narrow-bodies from the American air framer, five more than a month before. A number of airlines received more than one 737-800 from the US manufacturer, including Ryanair, which incorporated the last seven units into its fleet, having taken a total of 348 787-800s since the first delivery back in March 1999. Two US carriers, Southwest Airlines and American Airlines, took delivery of respectively four and three air frames of the type, while Brazilian GOL and Malaysia Airlines each received two units. Moreover, Alaska Airlines, United and Indonesian Lion Air expanded their respective narrow-body fleets each with two 737-900s.