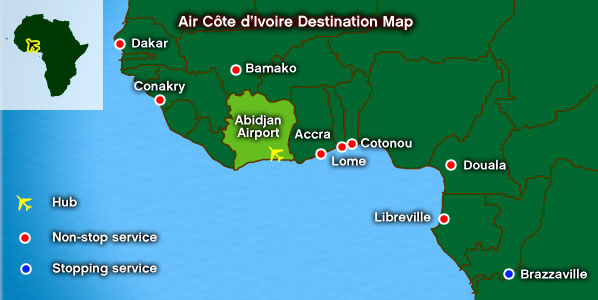 Supported by Air France, Air Côte d'Ivoire is expanding fast in West Africa. Outlining the airline’s strategy was its CEO, René Décurey: “On the network, we decided that we could not do it alone, we need partners, and with feeder flights from different countries, we can create a platform in Abidjan. This allows us to make direct flights from Abidjan to Central Africa without going via Cotonou or Lomé.”

Air Côte d’Ivoire launched its operations in November 2012 as a result of a public-private partnership, which includes the Ivorian government (65% shares), Air France (20%) and other partners. However, it is not the only African airline to have taken to the skies last year with a little help from a European partner – spring 2012 saw Korongo Airlines commence services in the Democratic Republic of Congo supported by Brussels Airlines, Germania was involved in the appearance of Gambia Bird in October, and ex-easyJet COO Ed Winter went on to lead the launch of Fastjet (which took the anna.aero Cake Prize in December). 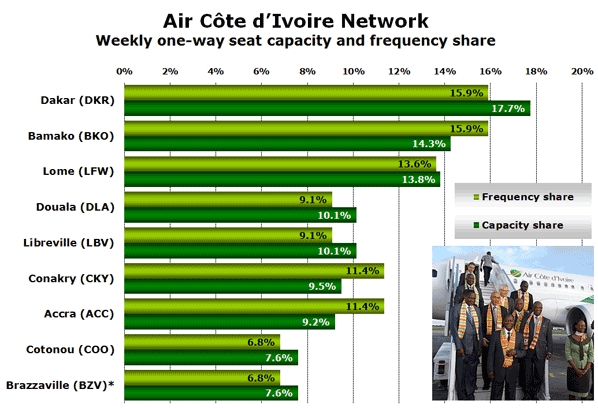 Successor to the former national carrier of the Ivory Coast, Air Ivoire, which folded in 2011, the new airline is helping Air France to increase its own presence in the region by creating a regional hub feeding its daily Paris service. In fact, Air Côte d’Ivoire has already launched eight non-stop routes from its budding hub in the former Ivorian capital, including that to Accra on 15 January, and has become the largest operator at the airport both in terms of weekly seat capacity and frequencies. 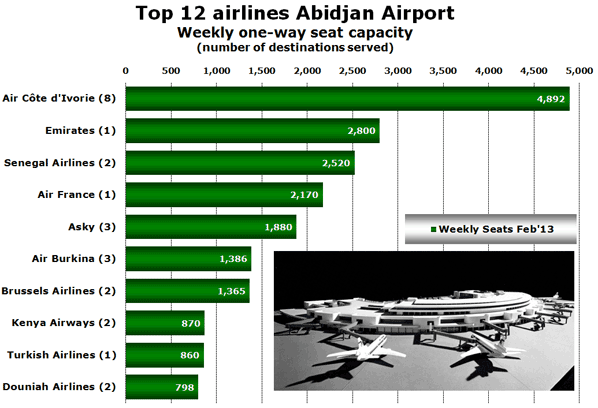 Senegal Airlines is the next largest airline from the region to operate from Abidjan. However, it only markets slightly over half of the capacity offered by Air Côte d’Ivoire. The only other carriers to serve more than one destination from the city are Asky Airlines (Togo) and Air Burkina (Burkina Faso).

While the airline started its operation with two ex-Air France A319s seating 124 passengers, it recently took the delivery of a 70-seat Embraer 170, which allowed it to tune the existing network up and add a new service to the neighbouring Ghana. Changes include increased frequencies to five destinations: Bamako (3 to 7 weekly frequencies), Conakry (3 to 5), Douala (3 to 4), Libreville (3 to 4), and Lomé (3 to 6).

The airline faces considerable competition on seven out of nine of its current destinations. Services from Abidjan to both Benin’s Conakry and Ghana’s Accra are the two markets in which strongest competition exists. Air Côte d’Ivoire faces 23 and 15 weekly frequencies respectively  from other airlines on these routes.