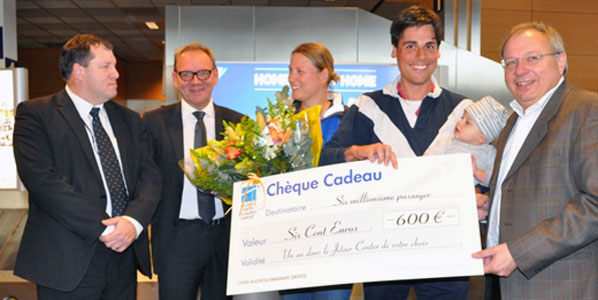 Less than two months ago, Brussels Charleroi Airport’s Chairman, Laurent Levêque and MD, Jean-Jacques Cloquet, welcomed the airport’s six-millionth passenger, but another 500,000 passed through its doors before the year’s end. With traffic growth losing some of its steam in 2012, can the airport still hit seven million this year?

Winner of the Passenger Growth Award in the 5-10 million passengers division in the 2011 edition of Euro Annies, Brussels Charleroi continued its strong growth in 2012. The recently published traffic figures show a 10% annual increase in traffic, with over half a million additional passengers handled by the airport in 2012 than in the preceding year. As the airport makes a rather conservative prediction for 2013, with no significant increase in passenger numbers expected, anna.aero examines its operation.

Late November 2012 saw Brussels Charleroi pass the six million passengers landmark for the first time in its history, but the airport has benefited from the rise of low-cost services in Europe for a while prior to that. Ryanair started operating in Charleroi as early as 1997, and went on to set up its first base in continental Europe here in 2001. Wizz Air and Jetairfly inaugurated their respective operations in 2004 and 2011. 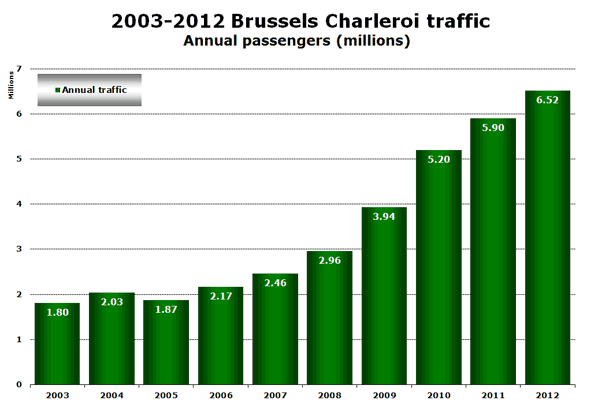 Unlike many other European airports, Brussels Charleroi has fared extremely well in recent years, noting traffic growth of 30%+ in both 2009 and 2010. While more recently this has slowed down, double digit growth was maintained in the two following years (2011: 12.6%; 2012: 10.4%).

A total of 92 unique destinations will be offered in Brussels Charleroi in April 2013, according to data published by airlines to date. Services on 76 of those will be provided by Ryanair, which has 83% capacity share at the airport in terms of weekly seats. Jetairfly and Wizz Air serve 22 and seven destinations respectively, providing 10% and 6% of seat capacity.

Unsurprisingly, Ryanair has a monopoly on as many as nine out of the airport’s top 12 destinations. The list is topped by Milan Bergamo, where the pan-European low-cost carrier provides thrice-daily frequencies, competing indirectly with Brussels Airlines’ 25 and easyJet’s 13 weekly flights on the route from Brussels to Milan Malpensa, as well as with further five daily frequencies to Milan Linate. 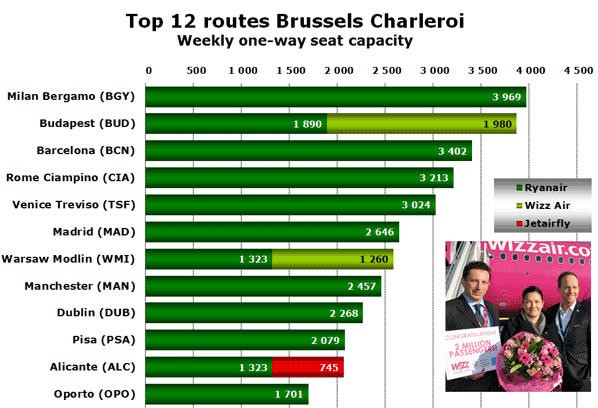 Source: Innovata w/c 15 April 2013. Please note, that due to the temporary airport closure in Warsaw Modlin, both Ryanair and WizzAir operate to Warsaw's main airport.

The second busiest route offered from the airport is to Budapest, on which Ryanair’s 10 weekly flights are contested by Wizz Air’s 11 weekly departures. Interestingly, Brussels Charleroi was one of the first destinations launched by the Hungarian carrier, dating back to August 2004, while Ryanair only launched the service in February 2012 as part of its expansion in the Hungarian capital following the demise of Malév. 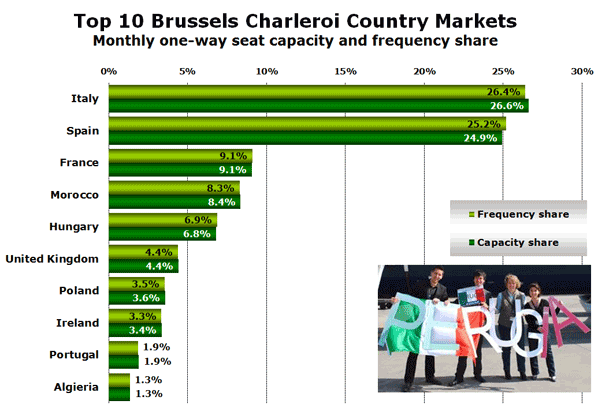 According to OAG Schedules iNet data set for April 2013, Italy is the largest country market served from Brussels Charleroi, albeit outperforming Spain only by a very low margin. While Italy is served exclusively by Ryanair (16 destinations in April 2013), the carrier competes against Jetairfly on five of its 15 Spanish routes.

The two carriers also go head-to-head on four Moroccan routes (to Fez, Nador, Oujda and Tangier), even though overall Jetairfly provides marginally more frequencies to Morocco. Traffic to another North African country, Algeria, is Jetairfly’s monopoly with three destinations served in April 2013 (twice-weekly to Algiers and Oran, and weekly to Bejaia).

A total of twelve routes were launched at Brussels Charleroi in 2012; all but three by Ryanair. Jetairfly launched flights to Nice and Palma de Mallorca, the latter in competition with Ryanair, while Wizz Air commenced operations on the route to Slovenian Ljubljana.

Already announced for 2013 are six low-frequency routes from the Irish carrier, which in mid-December refuted claims it would move to Brussels’ main airport in the future. Stephen McNamara, the airline’s Head of communications, underlined: “Ryanair is extremely proud of its 15 year partnership with Brussels Charleroi Airport. As our recent 10-year extension confirms, we remain committed regardless of what happens with Brussels Airlines and Brussels Airport.” Interestingly, RDC’s airportcharges.com tool shows clearly, that Brussels Charleroi offers very competitive pricing in comparison to both Brussels Airport and Liège. Total airport charges for a 160-seat A320, filled to a 75% load factor, amount to less than 300 euros – a fifth of the rates charged at Liège, and less than a tenth of prices at Brussels’ main airport. Average per passenger saving of 19.35 euros surely helps bind the airport’s relationship with low-cost operators.

The only other non-Ryanair route launch announced so far in Brussels Charleroi is Wizz Air’s twice-weekly service to Cluj Napoca in Romania.