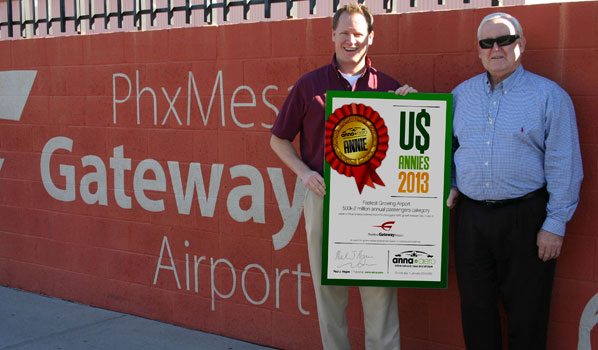 Gateway to success: Phoenix-Mesa Gateway Airport picked up its US ANNIE for near 50% growth in the 500,000-2m passenger category, largely thanks to the arrival of Frontier Airlines and Spirit Airlines since December 2011. Phoenix-Mesa ‘s Public Information Officer, Brian Sexton, and John Barry, Commercial Air Service Development Manager, proudly hug their “big” award. 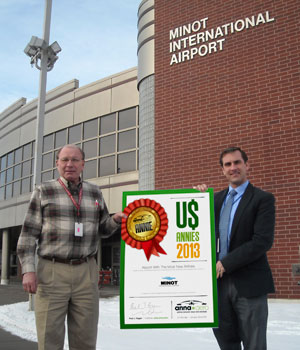 North Dakota’s Minot is no minnow – in fact it won the “Airport With The Most New Airlines” prize. It was -22C at Minot International Airport when this photo was taken, but ops manager, JD Karhoff, needs only his shirt and his red-hot US ANNIE to fend off the cold. Minot Airport Director, Andrew Solsvig, shares the prize with some unknown airport with “JFK” in the name.

The US ANNIE Airport Awards

Eight airports have won prizes in the 2013 US ANNIE Airport Awards – Part 1 (Airline awards to follow in Part 2 next week). Remember, all awards are based on science, statistics and evidence rather than people’s opinions (and votes). Using Innovata schedule data for over 620 US airports, our team of data elves have pored over the figures and we think we have again devised a more lucid way of rewarding airports that have achieved notable route and traffic related success in the US during the last year. Honolulu can add a US ANNIE prize to its celebrations for the launch of Sapporo services in October 2012. Hawaiian Airlines’ many new routes helped lift Honolulu 9.5%, scooping it the prize for fastest-growing US airport in the over-10 million passenger category. In a US ANNIE-Hawaiian-hat-trick Kahului Airport and Lihue Airport also carried off prizes.

In the 5-10 million passenger section, Kahului, HI, gateway to Hawaii’s second largest island of Maui, wins this award thanks to a year-on-year capacity increase of 13.9% – delivering the islands’ second #1 spot. Illustrating the tough conditions in the current US market for this size of airport, this beat the marginal 0.7% increase growth offered by Buffalo Niagara, NY. The same three airlines which were responsible for Honolulu’s success have also taken the lead in driving growth at neighbouring Kahului. In the last year, two new routes from Alaska Airlines and Allegiant Air (both to Bellingham, WA) as well as intra-island and increased services from Hawaiian Airlines (up to 21-weekly to Lihue, new services to San Jose and Oakland, CA) have improved the airport’s network of services.

In the two-to-five million annual passenger airport section, the final Hawaiian airport winner, this time Lihue, HI, on the garden island of Kauai, beat off competition from Guam, another US island located in the western Pacific Ocean. Alaska Airlines made its Hawaiian airport growth strategy even clearer, being responsible almost single-handedly for Lihue’s recent surge in traffic. Portland, OR, has been added as a new destination from Lihue by Alaska, with increased weekly frequencies again to California’s Oakland and San Jose, as well as Seattle/Tacoma, WA.

Representing the only winner from the 48 contiguous US states, former air force base Phoenix-Mesa, AZ, has won the smallest passenger category of 500,000 to 2m annual passengers. The secondary airport serving the Phoenix region did, however, post the largest year-on-year growth of all the winners – with an impressive 45.7% hike following the arrival of Frontier Airlines and Spirit Airlines since December 2011. Against such a strong winner Montana’s Billings Logan was always going to be fighting for second place in this category, but its 15% growth rate would have been enough to win any of the other larger categories.

Washington Reagan National Airport is on course to post record passenger and flight statistics for 2012, attracting 15 new destinations from 10 different US states (and the loss of two routes) in the period analysed, however some of its gains are at the expense of domestic declines at fellow Washington Metropolitan Airports Authority facility Washington Dulles International Airport (IAD). As a result, the two-airport system will produce a domestic passenger trend for 2012 which is relatively flat. That said, IAD remains strong as the region’s clear leader in international flights. On 3 October United Airlines started a service from Denver, CO to Grand Forks, ND. Little did it know that it would help Denver Airport take the runner-up prize in the world-reknowned US ANNIES 2013.

Between December 2011 and December 2012, Denver International has attracted 10 new destinations from nine different US states, plus it has secured a four times weekly 757 operation with Icelandair from Reykjavik, with loss of only two routes in the same period.

This year’s winner, with a net of five routes, is California’s Los Angeles (LAX). Significantly, there were two new intercontinental routes, with Transaero Airlines’ twice weekly 777 service to Moscow Domodedovo, joined by airberlin’s thrice-weekly Dusseldorf flight becoming a year-round service. In addition, LAX has gained three new points in Mexico, with low-cost airline Volaris beginning single weekly rotations to Uruapan and Culiacán (routes operated by A320 and A319 respectively). The third point, Durango in northwest Mexico, is again served single weekly, this time by ExpressJet Airlines operating as United Express. Kelowna has benefitted from two airlines starting operations to LAX from British Columbia in Canada. The first is again with United Express, but this time operated by SkyWest Airlines, starting eight weekly CRJ-700 flights in addition to WestJet inaugurating weekly 737-700 flights over the past year. The only mark in the negative column, albeit a significant one, was the loss of daily Thai International A340-500 operations to Bangkok over the preceding year.

Honolulu (only) took second place this time, recording its fifth, sixth and seventh Japanese destinations following the start-up of flights to Sapporo, Fukuoka and Nagasaki, with based carrier Hawaiian Airlines operating on the two former routes with 10 weekly flights in total. The carrier also added a service to Brisbane in November 2012.

Of note at New York John F. Kennedy International Airport is the start-up of Brussels Airlines to Brussels, which began in June last year, although this was quickly followed by the loss of Jet Airways in September 2012, also to its European transit hub in Belgium – presumably in a coordinated move between these codeshare partners. Jet Airways continues its daily A330 service to New York Newark Liberty International Airport.

North Dakota’s Minot International Airport has secured daily (A320 and MD-90) mainline Delta Air Lines flights from Minneapolis/St Paul complementing existing operations on the route since December 11. In a similar fashion, the airport has gained two new carriers on flights to Denver, with ExpressJet Airlines and Midwest Airlines, both four times weekly with ERJ-145 and ERJ-190 equipment respectively. Frontier Airlines' arrival at Harrisburg in May 2012 helped the Pennsylvannia airport to secure its runner-up award in the Airport With The Most New Airlines category.

Serving the capital of Pennsylvania, Harrisburg International Airport has partially recovered the loss of its nine weekly B717 AirTran Airways service to Orlando, FL (MCO) with the arrival of Frontier Airlines’ four weekly A319 operation to MCO. This addition was complimented by further growth to two new destinations in Florida with Allegiant Air – namely to St Petersburg-Clearwater and Orlando Sanford.

Just in case you need to know: The US ANNIE rules

When determining whether a route or airport was included in the data, a minimum requirement was set that the route had to be operated at least weekly (so four times per month) during December. These results are based on airlines operating scheduled flights and thus submitting their data to Innovata.

When analysing data in the “most new” categories, we take into account routes and airlines that have stopped operating so what we are in fact measuring is the biggest net gain in each category. We accept that if other months of the year were used for analysis then different results might be obtained.

Part 2 – Lots more pictures and the US ANNIE Airline Awards!