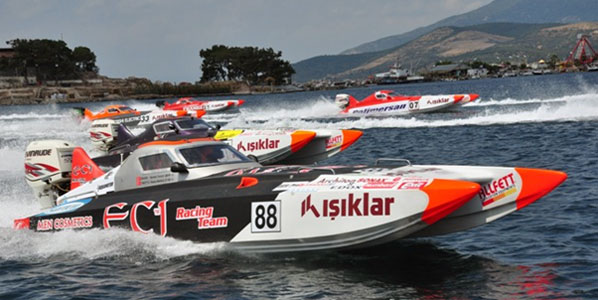 Access to the Grand Prix’s at Van (8/9 June 2013) and Gaziantep (28/29 September 2013) for fans of the U.I.M. World Offshore 225 Championship for powerboats just got better, thanks to Atlasjet launching services this month from Istanbul Atatürk. Championship official carrier Anadolujet may have something to say about that though.

Atlasjet Airlines seems to be once again taking the fight to its domestic Turkish market competitors, with the launch of 70 weekly frequencies already during January 2013. It has also strayed away from its Istanbul Atatürk International Airport stronghold, taking the decision to start-up complimentary domestic operations again at Istanbul Sabiha Gökçen International Airport, following its withdrawal from the Turkish capital’s secondary airport just four months ago.

During January, the airline has started a new service every few days, with 11 January seeing the launch of Istanbul Atatürk — Adana, 15 January to Gaziantep and 18 January to Kayseri, again both from the carrier’s home base. A few days later, Atlasjet’s new route focus switched to Sabiha Gökçen, just 43 kilometres across Istanbul, with the opening of flights to Van and Kars just last week, on the 22 and 25 January respectively. These new services have resulted in an impressive 18% capacity hike over the last 12 months.

The mainstay of the carrier’s domestic fleet are its 149-seat A320s, with the aircraft also being called upon to commence Atlasjet’s next internal city pair between Sabiha Gökçen and Antalya, on the Mediterranean coast of southwest Turkey, from 1 April. However, its not all growth for the airline, with some of this latest capacity increase being fuelled by network cut-backs elsewhere – with Istanbul Atatürk to Bodrum seeing the biggest cut of 66% of its weekly frequencies.

With the Turkish new route boom seemingly insatiable at the moment, this currently non-aligned carrier may be drawing admiring glances from the likes of SkyTeam or oneworld, looking to gain a toe-hold in this burgeoning market. However, its other major domestic competitors also remain virtually free from any commercial constraints which may preclude entry into an alliance, with Onur Air currently without any sort of recognisable codeshares agreements in place, while Pegasus Airlines has only limited tie-ups with airberlin.

With thrice daily operations, new services from Istanbul Atatürk to Adana and Kayseri, both in central Turkey, have leapt straight into the top three routes for Atlasjet, in terms of weekly seats and capacity. The gap between these route newcomers and the top two services has been reduced, with flights from Istanbul Atatürk to Izmir and Antalya both being on the network planner’s treatment table in the last year, each receiving cuts of seven weekly frequencies. 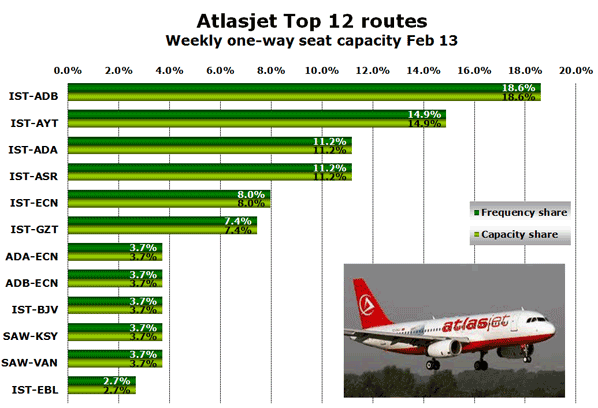 Atlasjet’s focus in the Turkish domestic market is laid bare in this chart with only one international route charting — namely the carrier’s service to Erbil in Iraq. The airline’s only other two cross border routes in February 2013 are low frequency services to Tehran in Iran and Sulaymaniyah in Iraq. Notably, parent ETS Group purchased a $150 million, 50% shareholding in Erbil-based Zagros Air in May 2012. Zagros’ passenger services between northern Iraq and Turkey resumed in June 2012, after taking delivery of the first of three planned A321s, transferred from Atlasjet.

Looking down the microscope at Atlasjet’s highest frequency routes, its 35 weekly operation between Istanbul Atatürk and Izmir, and also its four times daily service from the Turkish capital to Antalya, reveals that the airline is slugging it out with Onur Air for #3 spot in the battle for the domestic market. The margins between the two airlines on these two routes are slim, with Atlasjet having the edge in terms of weekly frequency, but Onur’s higher capacity 180-seat A320s helping to narrow the capacity gap when it comes to weekly seats. 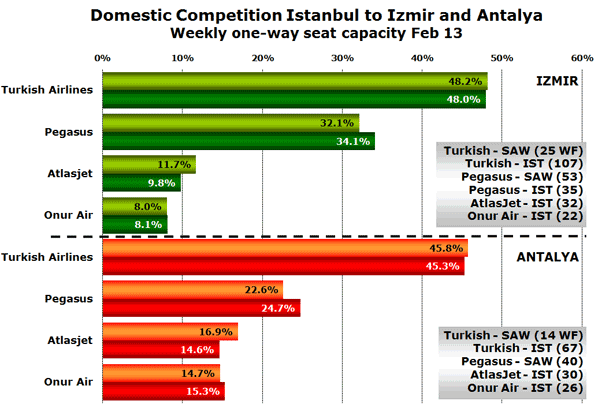 Both Onur and Atlasjet have a significant gap to bridge before either can consider themselves as putting Pegasus under any pressure to become the number two player in the Turkish domestic market. Effectively the two smaller airlines are squabbling over the remaining 25% of the Turkish domestic market, with national carrier Turkish Airlines commanding 50%, and Pegasus taking a 25% share. Overall, Atlasjet now has the edge on Onur Air, with a 7.1% share, versus the latter’s 6.6% in February 2013, probably as a direct result of the former’s busy month of January in terms of launching new domestic capacity.