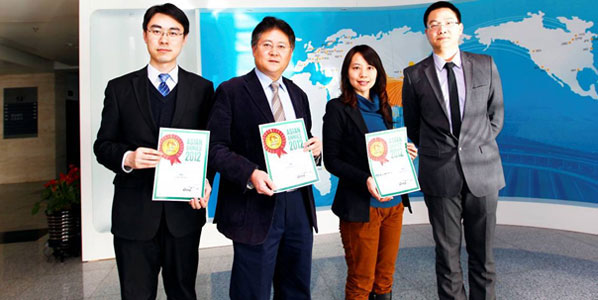 Treble winner of anna.aero’s Asian ANNIES last year (in the most new routes, the most new long-haul routes and the most new airlines categories), until now Beijing Capital was also the world’s largest airport never to be featured in a separate anna.aero analysis.

Mid-January brought about the approval of the construction of a new $11.2 billion airport for Beijing by the Chinese government, but it will be a while until the new facility even gets a chance to compete with its large neighbour, Beijing Capital. In fact, not until 2025 could Beijing’s yet-to-be-built second airport reach its full capacity, currently estimated at 75 million per annum. Meanwhile, anna.aero takes a closer look at Beijing Capital, possibly the largest airport never featured in an exclusive anna.aero analysis before, and one that is set to take a considerable amount of further growth before relief capacity is provided.

Having unseated London Heathrow as the world’s second busiest airport in 2010, Beijing Capital continues to diminish the gap it has to Atlanta (which has topped the list of busiest airports since 1998). Although the US airport still has a considerable safety margin (in 2012, it handled 88m+ through November), last year saw the Chinese airport achieve another landmark, as it passed the magical 80-million mark. 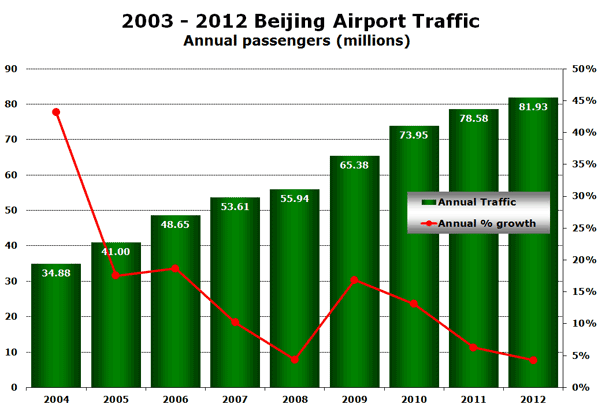 While double digit growth seems to be a thing of the past, at least for the time being, a modest increase of 4.3% was noted last year and 2012 was closed with a total of 81.9 million passengers, as compared to 78.5 million the year before.

Examination of Innovata data for February 2013 shows that domestic capacity grew by 3.6% compared to the respective period in 2012. A total of 110 domestic routes are operated by a combination of services from 16 airlines. Unsurprisingly, Air China dominates the market with around 43% of both weekly seat capacity and frequencies, offering flights to 83 destinations in Mainland China. The carrier grew its domestic seat offering by 9.9% last year. 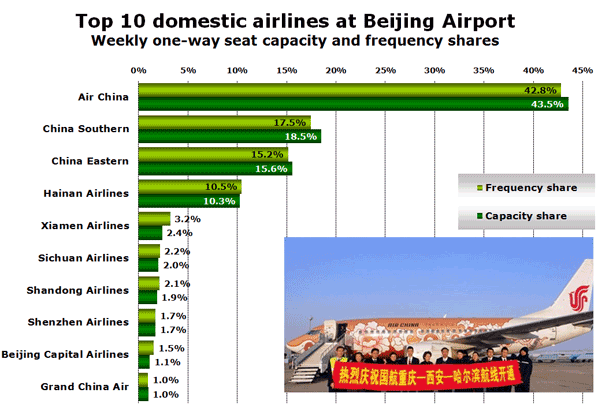 China Southern, China Eastern and Hainan Airlines are the only other companies to surpass the 10% capacity share, measured either in terms of frequencies or seats. However, none of them has more than 20% of the market. In February 2013, the fastest growing (in terms of seat capacity) domestic airlines in Beijing Capital are: Beijing Capital Airlines (14.7% growth Feb 2013 vs Feb 2012), Shenzhen Airlines (11.2%), and Grand China Air (10.8%); even so, none of them can be called a big player quite yet (as none of them has more than 2% of the capacity share).

Frankfurt is the largest long-haul destination

Out of 12 top international destinations from Beijing in terms of weekly seat capacity, as many as eight are short- and medium-haul routes to major centres in the region. The enclave of Hong Kong tops the list, as the 133 weekly frequencies offered by six airlines (Dragonair – 49 weekly frequencies, Air China – 42, Cathay Pacific – 14, Hong Kong Airlines – 14, China Southern – 7, Hong Kong Express – 7) make up for just under a third of non-domestic seat capacity from the Chinese capital. 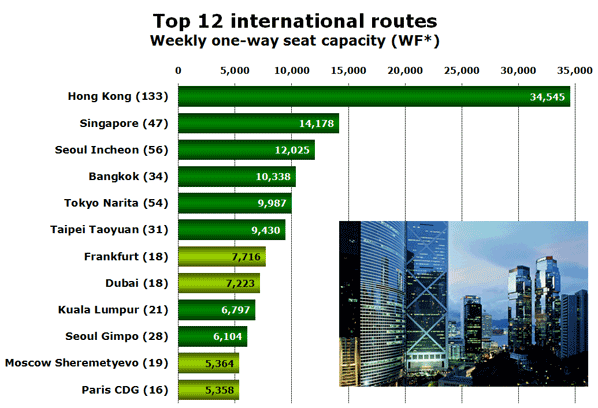 Four long-haul destinations make it onto the top 12 list, with Frankfurt – served with 12 weekly frequencies by Air China and six weekly by Lufthansa – being #1 amongst them. Notably, Dubai lost its leading position here after both China Southern and Hainan Airlines pulled their respective services (twice- and weekly) over the course of 2012.

While San Francisco is the largest US market from Beijing Capital as measured in weekly seat capacity (and #14 on the top international destinations list), United Airlines is actually the fourth-largest capacity provider on international routes, behind Air China, Dragonair and Singapore Airlines. The carrier provides daily services to Chicago O’Hare and San Francisco, and six weekly to both Houston and Newark. The latter was previously served by Continental and is offered under the United brand since March 2012.

Similarly to the domestic market, Air China has the #1 international offering too, operating a network of 38 worldwide destinations from its Beijing hub. This gives the airline a 31.2% share of the international market from the capital in February 2012, which is marginally better than the 31.1% a year before. In 2012, the Chinese carrier withdrew its services on the routes to Kuala Lumpur (4 weekly frequencies), Melbourne (3) and Osaka (2), while London Gatwick became the airline’s second UK destination after Heathrow and was the only new long-haul route launched since February 2012.