When airberlin announced recently that its network strategy would be based around development at four main hubs (Berlin, Düsseldorf, Palma de Mallorca and Vienna) the management team at Nürnberg airport in southern Germany will have started to worry. When the airport’s traffic peaked at 4.3 million in 2008, airberlin was responsible for almost exactly 50% of scheduled capacity during the peak summer month of September. According to OAG data for S’13, airberlin will be operating some 40% fewer seats at the airport this summer than it did five years ago.

However, the airport has been successful in finally attracting Ryanair services for the first time this summer. Europe’s biggest LCC will introduce inbound flights from its Spanish bases in Alicante and Malaga, its Italian bases in Cagliari and Pisa, its Portuguese base at Porto, and its UK base at London Stansted. All routes will be served with between two and three weekly flights, with the exception of London, which gets a daily service. None of these destinations are served by any other carrier.

This week also saw the launch of another new London service operated by CityJet on behalf of Air France to London City airport. This new service will operate twice daily on weekdays. The London market was previously served by airberlin when it operated to London Stansted (from October 2002 until February 2011) and then to London Gatwick (from February 2011 until earlier this month). 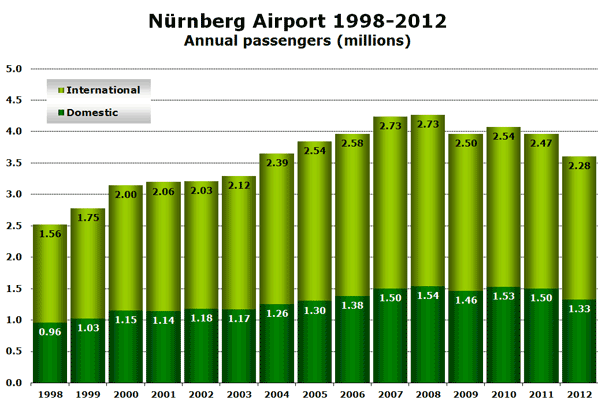 Domestic traffic has consistently accounted for between 35% and 40% of the airport’s traffic. The airport’s seasonality profile is not as extreme as at many other European airports, suggesting a strong focus on business traffic. 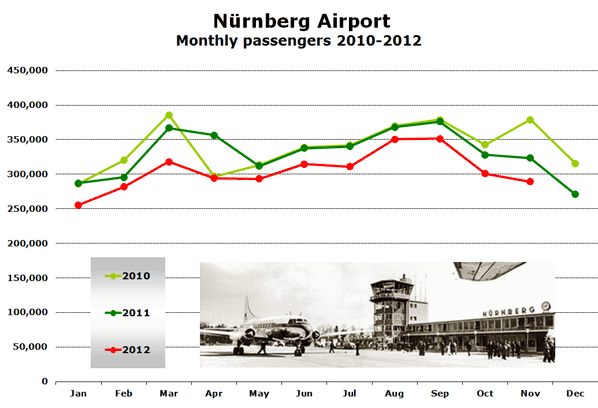 airberlin’s route network this summer will comprise over 20 non-stop destinations including multiple daily flights to its four designated hubs plus Hamburg. In addition it will serve Antalya daily and various Mediterranean leisure destinations with between one and three weekly flights.

A look at the airport’s top 12 routes in 2011 reveals that there is not much to choose between the top three airports. Berlin Tegel, Düsseldorf and Hamburg each generated just over 300,000 passenger movements, with the leading international destination, Palma de Mallorca, not far behind. The top three routes all saw direct head-to-head competition between airberlin and Lufthansa. 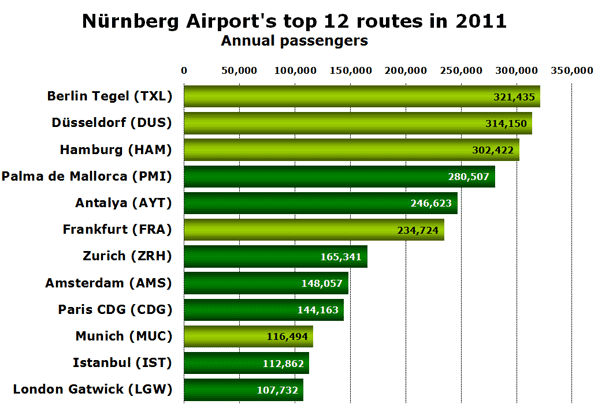 The appearance of Zurich, Amsterdam, Paris and Istanbul in the top 12 destinations is down to Swiss, KLM, Air France and Turkish Airlines who all choose to link Nürnberg to their home hubs. Although airberlin is still the dominant carrier with around 35% of seat capacity, local rival Lufthansa also has a presence but serves just five domestic routes; Berlin Tegel, Düsseldorf, Frankfurt, Hamburg and Munich. However, these multiple daily flights give the German flag-carrier an almost 25% share of the market. Although Frankfurt and Munich will remain Lufthansa routes the others are planned to be outsourced to the carrier’s LCC, germanwings at some point. The process will start with the Hamburg route which will be operated by germanwings from 31 March.

Apart from Ryanair and germanwings two other LCCs will be operating from the airport this summer. Pegasus of Turkey will be serving Istanbul and Vueling will operate four times weekly to Barcelona.  airberlin’s biggest competitor on its Mediterranean routes is TUIfly which serves both Antalya and Palma, as well as three destinations in Greece; Heraklion, Kos and Rhodes. And speaking of the Greek market, it was recently revealed that Star Alliance member Aegean Airlines plans to start weekly operations from Thessaloniki from 27 May.

Using RDC’s airportcharges.com, it is evident that Nürnberg is a low-cost alternative to nearby Munich, just 140 kilometres away to the south, and comparable to Stuttgart, which is located 160 kilometres to the south-west. Its total airport charges for a 160-seat A320, filled to a 75% load factor, are around 2,900 euros, around the same rate as those levied at Stuttgart, but some 10% cheaper than at Munich. Total charges per passenger are approximately 24 euros for Nürnberg and Stuttgart, representing nearly a 2.30 euro saving versus those to be paid by the 38 million annual passengers using Munich.