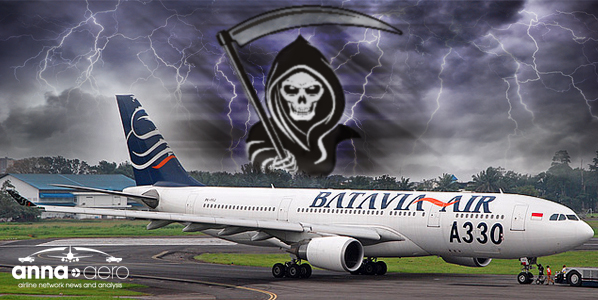 Is this the world's unluckiest A330? It has been pointed out to anna.aero that this poor plane has now suffered no less than FIVE airline failures!!!! Canada 3000, Volare Airlines, Air Madrid, and Air Comet all previously operated this A330 before Batavia Air. If you are not superstitious, A330 serial number 205, is likely to represent great value from ILFC.

Launched as Metro Batavia with a wet-leased Fokker F28 in January 2002, Batavia Air grew rapidly to become Indonesia’s fourth-largest carrier. In December 2012, it operated a mixed fleet of 34 narrow-bodies from the A320 and 737 families. Last year saw the airline undertake negotiations with the AirAsia group, and the acquisition of a 49% stake in Batavia Air by the Malaysian-based carrier was mooted — however the deal was abandoned in the final stages. Finally, the US-based aircraft lessor ILFC filed a bankruptcy petition against Batavia Air, after it had failed to pay $4.7 million debt from the purchase of two A330s. Judging in favour of the leasing company, an Indonesian court declared Batavia Air bankrupt last week.

Concentrating 57% of Batavia Air’s weekly seats (Innovata w/c 21 January 2013), Jakarta was the airline’s largest airport. While the carrier had a share of around 7% in terms of weekly seat and frequency, which placed it as Jakarta’s #4, it offered a total of 25 destinations from the Indonesian capital. Notably, only two of those – daily flights each to Kupang (KOE) and Ternate (TTE) – did not face any competition, indicating the harsh reality of operating in the dense Indonesian market. 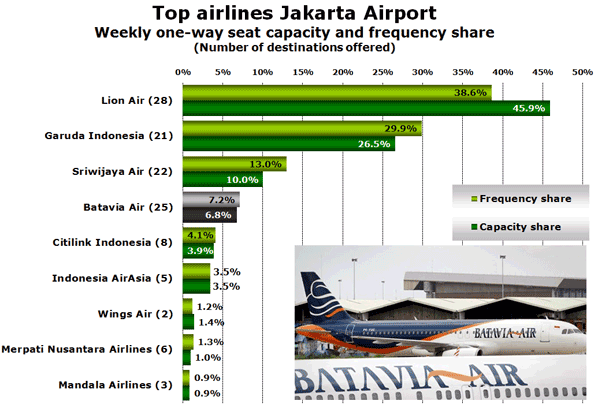 More than three dozen airports across Indonesia were served by the airline, but most, and similar to situation in Jakarta, high levels of competition mean that a low percentage of services will be lost. In this week’s airport analysis, we provide full coverage of the impact of Batavia Air’s bankruptcy on Indonesia’s third-busiest airport, Surabaya.

Operating 35 weekly frequencies on nine international routes in late January, Batavia Air was outside of the top 10 in the international market from Indonesia. The largest operators, Indonesia AirAsia (297 weekly frequencies), also provides almost ten times as many weekly seats as Batavia Air flew before its demise. Again, competition was significant on most of the routes, including 200+ weekly flights from nine carriers on the route from Jakarta to Singapore.