Croatia’s entry into the EU puts a lot of pressure on the country’s flag carrier with combined weekly seat capacity on EU routes scheduled to grow by 10% this summer. While Ryanair has already announced Zadar as it 54th base, other carriers will surely be keen to consider their options.

Having just missed the two million passenger threshold in 2012, Croatia Airlines still managed to establish a new all-time high and is now gearing up for a busy 2013 summer season. In anticipation of Croatia’s entry to the European Union on 1 July, which is set to increase not only traffic but also competition (according to our recent country analysis, while Croatia Airlines was still #1 in August 2012, it was followed by no less than four low-cost carriers), the airline has announced significant changes to its network, including the launch of six new routes.

While Croatia Airlines failed to maintain the double-digit annual growth of 2011 (14.8%), it continued to grow throughout 2012 and closed the year with a 6.5% annual increase in passenger traffic. A total of 1.95 million passengers were uplifted by the airline last year and, given the geopolitical circumstances, this number is likely to improve in 2013, once Croatia is in the EU. 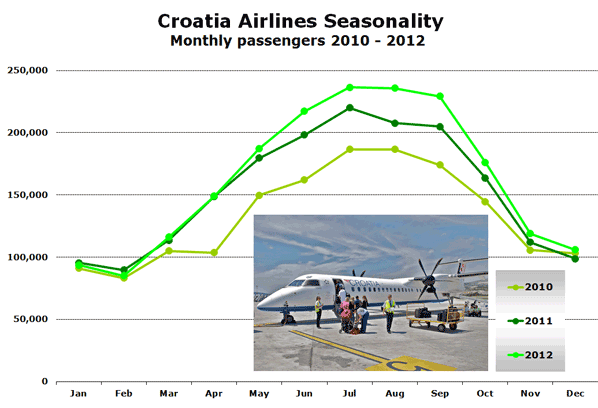 Historically, February and July have been respectively the weakest and the strongest months of the year, corresponding to the increased tourist demand during the summer. Examination of recent traffic figures shows that this gap is widening: In 2010 the February low constituted 45% of the July peak, in 2012 it only accounted for only 36%.

Services to Brussels, where many EU institutions are located (along with lots of new Croatian Eurocrat jobs), will see a significant boost this summer. While Croatia Airlines will continue to serve the Belgian capital with six weekly frequencies, capacity will increase by 66% as a result of equipment upgrades (4x/w A319 and 2x/w Dash 400, from 6x/w Dash 400 in 2012). 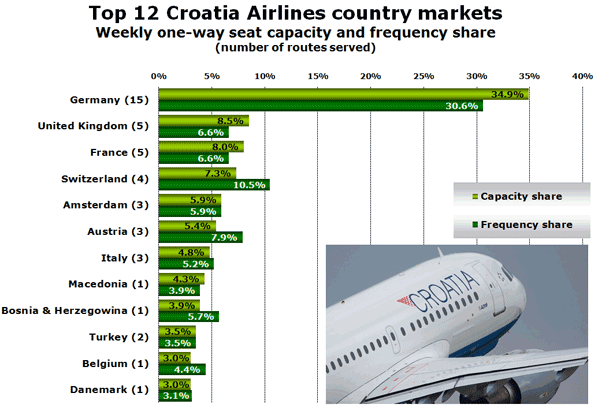 Turkey is another of the airline’s country markets in which significant capacity growth is expected this coming summer. A combination of frequency and capacity changes on the year-round service to Istanbul Atatürk from Zagreb, as well as on the seasonal route from Dubrovnik, has resulted in almost 19% more weekly seats being offered by Croatia Airlines in the market this summer, according to OAG Schedules iNet. Curiously, the otherwise bullish Turkish Airlines, which provides competition on the route from Zagreb, reduced its weekly capacity by 5%.

Examination of OAG Schedules iNet date for w/c 8 July 2013, roughly a week after Croatia joins the EU, reveals that Germany continues to be Croatia Airlines’ largest country market with a third of the carrier’s weekly international seat capacity and frequencies. A total of 15 routes are served from Dubrovnik (3), Pula (2), Split (5), Zadar (2) and Zagreb (2), including five new services launched in spring 2013.

Jat expands on the Croatian coast

Croatia Airlines, which abandoned the Dubrovnik to Belgrade market last year (having offered twice-weekly flights in summer 2011), will witness Jat’s further expansion on the Croatian coast in summer 2013. The carrier plans to increase its seat offering on the seasonal routes from the Serbian capital to the Croatian coast by 86%, as it doubles frequencies up to four-weekly each to Pula and Split, and adds two weekly flights to its last year’s thrice-weekly schedule to Dubrovnik. This means the twice-weekly service from Split to Belgrade is currently Croatia Airlines’ only Serbian route.