The US ANNIE Airline Awards

Four airlines have won prizes in the 2013 US ANNIE Airline Awards – Part 2 (The winning airports were announced last week in Part 1). Remember, all awards are based on science, statistics and evidence rather than people’s opinions (and votes). Using Innovata schedule data for nearly 220 airlines serving the US market, our team of data elves have pored over the figures and we think we have again devised a more lucid way of rewarding airlines that have achieved notable route and traffic related success in the US during the last year.

Airline With The Most New Routes: Spirit Airlines 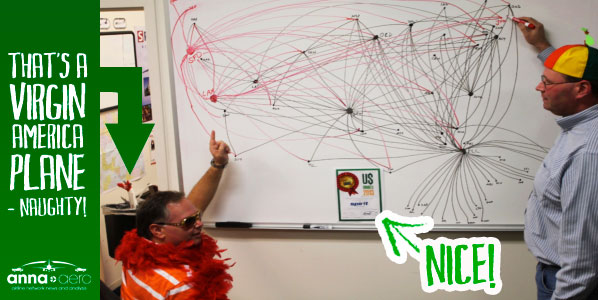 Thinking gear on? Let’s plan a route network! Using this year’s winning US ANNIE 2013 certificate for inspiration, Spirit Airlines’ Chief Marketing Officer, Barry Biffle (A.K.A. low-cost Elvis) and Senior Director of Network Planning, Mark Kopczak (with his route planning thinking cap on) decide which airports will be “All Shook Up” next (released in 1957 by Elvis). Clearly Spirit’s growth plans will all be “Too Much” (also 1957) for Virgin America – who have been consigned to the trash!

Going one better this time around, the airline with the biggest net gain in the number of routes served is Spirit Airlines (last year’s runner-up in this category) with 23, beating joint runners-up Allegiant Air and Southwest Airlines (winner of this award on the last two occasions) into second place (both totting-up 18 new routes). Spirit did win a US ANNIE last year, however it won the “Airline With The Most New Airports” award. In the 2011 awards, the Miramar, Florida-based (Ultra) LCC started 22 routes and dropped seven, whereas this year it started 30 and dropped just seven for the net gain of 23. The 30 new routes included 13 from its greatly-expanded Dallas/Fort Worth operation, five from new destination Denver (including DFW), and four from also new Minneapolis/St Paul.

Runner-up Southwest had a net gain of 18 routes, having started 45 but dropped 27. Of significance for the LCC was its entry into the Atlanta market with 12 new routes. Also with a net gain of 18 routes is Allegiant Air, which despite canning 21 services in the last 12 months, also started 39 fresh operations. Big winners for the carrier were Orlando Sanford (+11 routes), Oakland (+8) and Honolulu (+6); the biggest losers were Los Angeles and Las Vegas (both -8) between December 11 and December 12.

Looking at the four global US carriers (and their respective regional partners) reveals that all of them have used the last 12 months to make further capacity trims. Delta Air Lines was the most heavy-handed with the route pruning shears, dropping a net of 26 routes (or 8% of routes) in the period analysed. bizarrely, despite being in Chapter 11, American Airlines has made the least number of route cuts, with net of negative of just one route! United Airlines (-6) and US Airways (-4) both turned in a performance closer to American’s end of the spectrum.

Airline With The Most New Airports: Allegiant Air 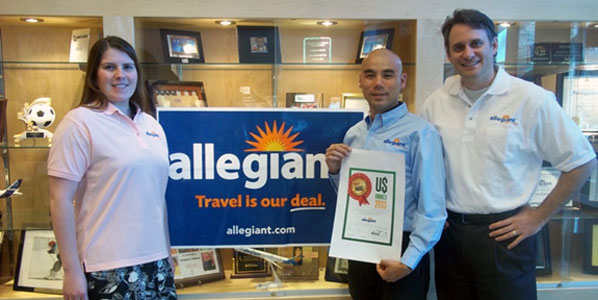 This display showcases all the route launch gifts Allegiant has received from 17 grateful airports in the last 12 months to which the airline can now add the anna.aero US ANNIE for Most New Airports. Kristen Schilling, Analyst, Network Planning, Lukas Johnson, Director, Strategy and Pricing and Jude Bricker SVP Planning add the trophy to the cabinet.

This year’s winner of the US ANNIE for the biggest increase in the number of destinations served is Allegiant Air which, during the last 12 months, has increased the number of destinations it serves by 11. The airline has added a total of 17 new destinations, but has dropped six over the same period. Most of the new airports have received twice weekly operations to Orlando Sanford or Phoenix-Mesa (winner of last week’s Airport Award in the 500,000-2m annual passenger category), with Honolulu, another US ANNIE winner from last week, seeing services inaugurated from six points along the US West coast. The new airports served are summarised in the following table:

Runner-up in this category this year is regional airline Silver Airways, with a net of eight new routes, mainly derived from its new Atlanta operation which was opened in October 2012.  The airline, rebranded in December 2011, took second place for this same award in the second US ANNIES in 2011, but under the guise of Gulfstream International Airlines. The eight new destinations, including Atlanta itself, comprises of four points in Missouri (Greenville, Meridian, Laurel/Hattiesburg and Tupelo), one in Florida (Gainesville), one in Alabama (Muscle Shoals) and one in West Virginia (Greenbrier).

Biggest ‘New’ Airline In The US Market:
Dutch Antilles Express

This award goes to the airline with the most scheduled seats operating from US airports in December 2012 that was not operating in, or to, the US in December 2011. The winner is Dutch Antilles Express, which is based at Hato International Airport on Curaçao. The carrier has had it troubles since it began its life as BonairExel in 2003, resulting in the government of Curaçao bailing it out in 2011. It has won the prize purely on the basis that it has introduced a double-daily 153-seat MD-83 operation to Miami-Dade, according to Innovata data, offering 2,142 weekly scheduled seats in December 2012, which were not operational in the previous December. South Korea’s Jeju Air was #2 in this section, losing out by just 96 weekly seats on its 11-weekly new service from Seoul Incheon to Guam.

Airline With The Most New International Routes: AirTran Airways 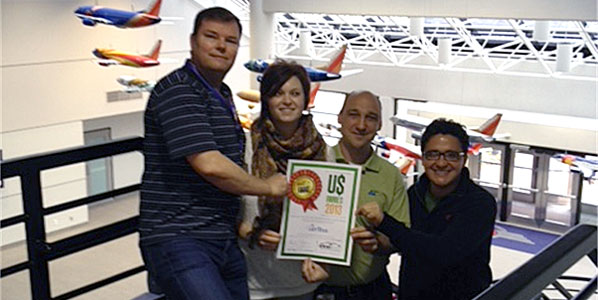 AirTran Airways’ Mexican expansion mission since December 11 has resulted in it winning the prize for international growth beating, by just one new route (seven in total), JetBlue Airways and Mexico’s Interjet into joint #2 spot. Its fresh incursions to Mexico City and San Jose del Cabo also represent new markets for the carrier, whereas route staple Cancun is now the clear route leader in the international arena for AirTran, served from seven points across the US.

Just in case you need to know: The US ANNIE rules

When determining whether a route or airport was included in the data, a minimum requirement was set that the route had to be operated at least weekly (so four times per month) during December. These results are based on airlines operating scheduled flights and thus submitting their data to Innovata.

When analysing data in the “most new” categories, we take into account routes and airlines that have stopped operating so what we are in fact measuring is the biggest net gain in each category. We accept that if other months of the year were used for analysis then different results might be obtained.