After a period of growth between 2003 and 2007, when the airport expanded its passenger numbers by an average of 8% per annum, the global economic crisis halted Southwest Florida International Airport’s surge and since 2008 its figures have temporarily stalled around the 7.5 million mark. However, in the year where the airport will celebrate its 30th anniversary of commercial operations moving from Page Field to its current location on the south-west edge of Fort Myers, the signs for 2013 would seem to indicate a return to marked growth. 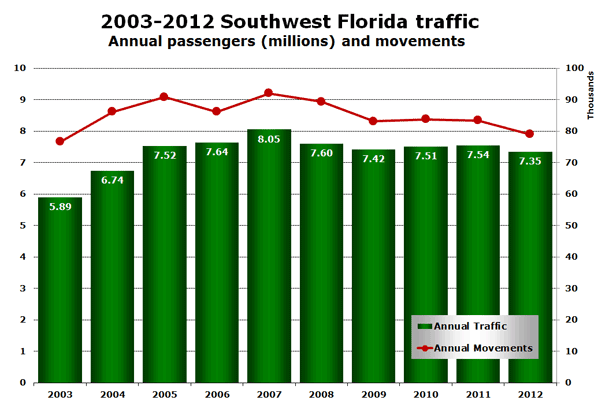 In a similar manner to its passenger traffic, the airport’s annual movements seem to have temporarily hit a glass ceiling of 90,000 (which was breached in 2005 and 2007) but is yet to be challenged in more recent years. Encouragingly, 2012 did deliver a valuable statistic for Lee County Port Authority (LCPA) which owns the airport, as average passengers per movement reached 93 — the highest figure it has achieved in the preceding 10 years. In terms of efficient use of an asset, this is key performance indicator that airport operators strive for improvements in.

As well as the improved passengers per movement result, Southwest Florida also boasts a diverse range of airlines and is not reliant on any one carrier for more than around 15% of its traffic. In turbulent times, this again represents a significant strategic benefit for LCPA over other Florida airports, some of which are reliant on one carrier for upwards of 80% of passenger volumes. That said, Delta Air Lines leads a pack of five airlines, all with 10-15% of weekly seats and flights. 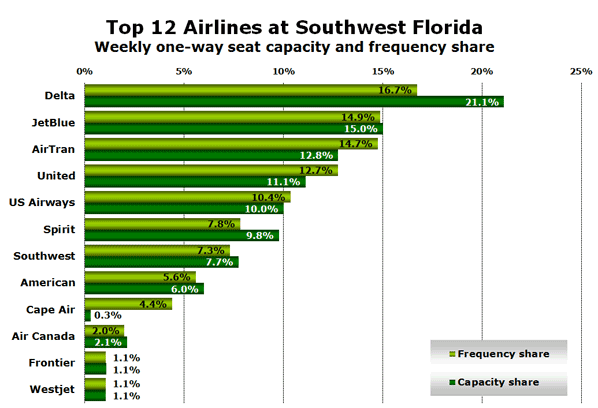 Comparing data for April 2012 and April 2013, Delta has consolidated its top spot with 3% growth in weekly flights and a 5% hike in weekly seats. Increases of 46% in flights and 41% in seats has pushed AirTran Airways into #3 place, ousting previous incumbent United Airlines, despite its own double digit growth in the period analysed. However, AirTran’s growth spurt has seemingly come at the expense of its parent company, Southwest Airlines, which has reduced its respective capacity by similar volumes. Despite its relatively low volumes, it is actually Frontier that leads the way in terms of capacity increases for April 2013, posting 60% more weekly flights and 70% more weekly seats than in April 2012. Indeed, the Denver-based airline inaugurated a twice weekly operation from Trenton, NJ to Southwest Florida this week.

Overall growth for April 2013 versus figures recorded for April 2012 is expected to see 8% more weekly flights — up to 753 — and 7% more weekly seats — climbing to over 100,000. At the vanguard of the expansion is the 58% spike in weekly capacity to Dallas/Fort Worth, resulting from Spirit Airlines’ new thrice weekly A320 operation, as well as six extra weekly flights from American Airlines on its 737-800s. 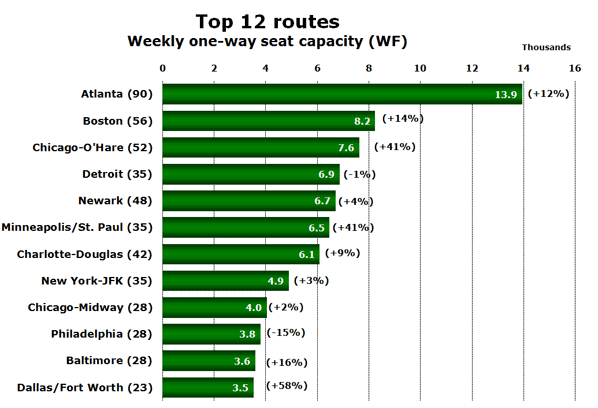 Both Chicago O’Hare and Minneapolis/St. Paul have both posted 41% growth in weekly seats between April 2012 and April 2013 – the former is due to American Airlines introducing eight further rotations to its existing 14-weekly operation, as well as four flights more from United; while the Minnesota airport has also seen the arrival of Spirit, with a daily service to drive its increase.

Not all routes are expecting expansion this year, with Philadelphia bearing the brunt of capacity cuts in the Top 12. Replacement of Southwest’s daily 175-seat 737-800 operations with similar frequencies from AirTran, but with its 117-seat 717s, is the main contributing factor to the Pennsylvanian airport’s 41% decline. Despite these cuts, if the overall planned 8% growth in capacity is delivered by the airport’s diverse collection of airlines, Southwest Florida International Airport will be pushing the magical eight million passenger mark again this year.