Mandala Airlines, which launched three new routes last month from Surabaya (including the award-winning service to Jakarta), moved quickly to take over two ex-Batavia routes (to Singapore and Pekanbaru) from the Indonesian capital. With at least three new aircraft joining its fleet in the next two months, Mandala Airlines is likely to shortly increase its presence in Surabaya again.

Situated in the eastern Java, Surabaya is home to Indonesia’s third-busiest airport, serving the country’s second-largest city with a population of three million. Three new routes were launched from Surabaya in January 2013, and in the upcoming weeks more changes are expected due to a bankruptcy of airport’s seventh-largest operator, Batavia Air, which ceased operations on 31 January. Serving nine domestic routes from Surabaya, Batavia Air was considered a small player in the very dynamic market operating only 7% of domestic and 2.2% of international total seat capacity in January 2013. While in the last 12 months Batavia Air added five new destinations from Surabaya and more than doubled the weekly seat capacity, it should not take long to fill the void left by its demise.

While eight out of nine routes operated by Batavia Air are substantially served by other airlines, Palu, the city on the island of Sulawesi is the only destination from carrier’s network currently left unserved from Surabaya.

According to the latest published data, the airport has recorded a growth of 20% in passenger movements by last October, as compared with the same period in 2011, and predicts to handle 15.8 million passengers in 2012 – nearly as twice its 8 million capacity. Domestic demand from Surabaya is the main driver of the airport’s traffic. According to the National Statistics Department of Indonesia, 91% of departing passengers headed for destinations within Indonesia in 2012 and constituted an increase of 18% over 2011 figures. Looking at Innovata data for February 2013, a total of 203,391 seats are offered on domestic routes – 83% more than the same month last year. 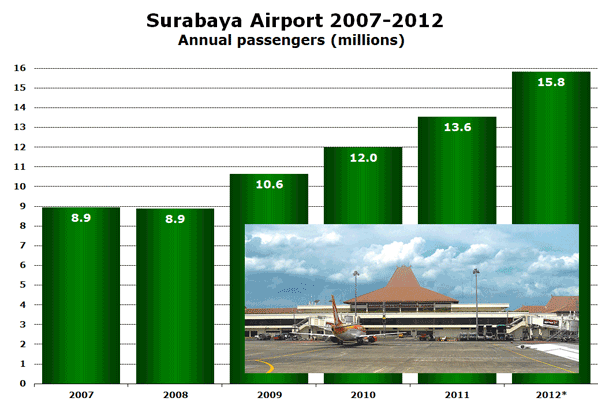 Lion Air and its subsidiary Wing Abadi lead the domestic market, in which their combined operations accounted for almost 49% of weekly frequencies and 54% of seat capacity share. The airline group, which last year placed an order for 230 new 737s and five 787s, enhanced its presence at the airport in the last 12 months, with a steep 48% capacity growth in terms of weekly seats, effectively doubling its operations since 2010. Garuda Indonesia, with its low-cost subsidiary Citylink, follows the Lion Air group, leaving only 21% of frequencies and 18% of total weekly seat capacity to share between the remaining five airlines operating in the market. Notably, last year Indonesia Air Asia, has rapidly grown in the Surabaya’s domestic segment, with four new routes added, thus offering eight times more seats this February comparing with the same month last year. 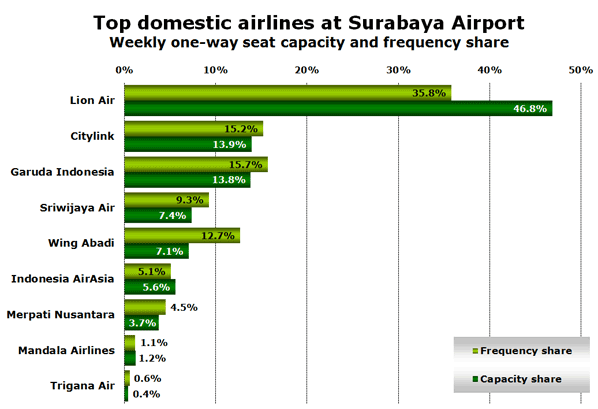 This February, the Surabaya – Jakarta route offers 66,199 one-way weekly seats, making it the busiest route in the country and the 10th busiest city pair in the world. Comparing current month with the same period last year, the market has expanded with 132 additional weekly frequencies and currently eight airlines share 369 one-way weekly flights operated on this ”golden” route.

Less than 10% flies on international routes

Unlike the vibrant and competitive domestic market, the international segment is ruled by somewhat different dynamics. In total, 11 airlines operate on eight routes, serving less than a tenth of the airport’s passengers (National Statistics Department). This is significantly less than in the case of Surabaya’s nearest competitor — Denpasar. The second-largest airport in Indonesia, is served with a total of 26 international routes this February, which accounts for 58% of the airport’s total capacity in terms of weekly seats. Mandala Airlines launched daily Surabaya to Kuala Lumpur and Singapore services in January 2013, and Indonesia AirAsia started flights to Senai in Malaysia and Bangkok Don Mueang, switching services from Bangkok’s main airport. According to Innovata data, international weekly seat capacity this February increased by 25% comparing with the same month last year, however the growth is mainly distributed among existing routes. 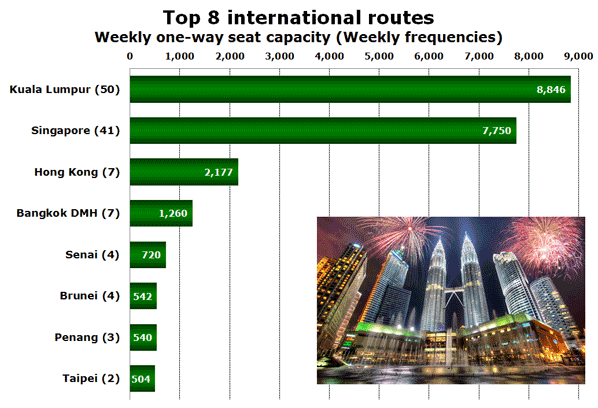 With 40% of the market share in terms of weekly seats, the AirAsia group dominates the international market, with Malaysia being the main country market (three routes). Singapore is the most competitive destination, where a total of 41 weekly departures are offered by SilkAir (14 weekly frequencies), China Airlines, serving Taipei via Singapore (7), Lion Air (7), Mandala Airlines (7) and Valuair (6). Of the three largest Indonesian airports, Surabaya is the only without services to Europe. Transaero flies from Denpasar to Moscow; Turkish Airlines connects Istanbul with Jakarta via Singapore; KLM serves both Jakarta and Denpasar, respectively via Kuala Lumpur and Singapore; and Garuda Indonesia (one of the six Indonesian airlines still able to fly into the European Union) operates from Jakarta to Amsterdam via Abu Dhabi. The airline also announced non-stop services to London Gatwick from Jakarta from April 2013.