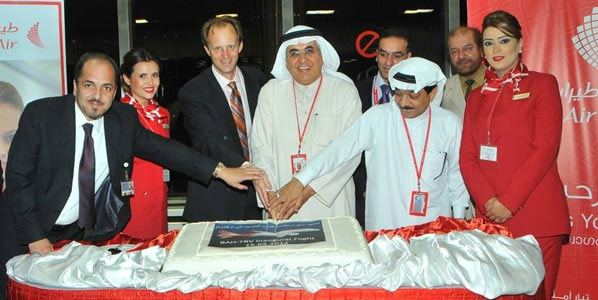 The knives are now out: Happier days just 11 months ago (the launch of Bahrain Air’s fourth Indian route to Trivandrum). Now the failed airline’s shareholders have accused the Bahrain government of “strangulation” after failing to pay it compensation for forcing it to cut routes during political unrest, while accusing the minister of transport of bias (he is also a board member of Gulf Air).

Bahrain Air today announced that it was ceasing operations with immediate effect. The airline which launched in February 2008 with two A320s has apparently been a victim of the on-going political unrest in the country. According to anna.aero research during the airline’s five year existence it served some 27 destinations in 15 countries across the Middle East from its Bahrain base, competing directly with Gulf Air on the vast majority.

Although Bahrain Airport’s traffic grew by almost 9% last year to 8.5 million passengers, this is still below the airport’s record of just over 9 million set in 2009. During the same period (2009-2013) passenger numbers in Dubai have grown by 41% from 41 million to almost 58 million, while in Abu Dhabi the airport has seen an increase of 50% in annual passengers from 9.8 million to 14.7 million.

Today’s (February 13) statement from the Bahrain Air Board of Directors was unequivocally bitter and very critical of the government, clearly accusing it of collusion over its ownership of Gulf Air, and perhaps showing just how bold government critics have become: