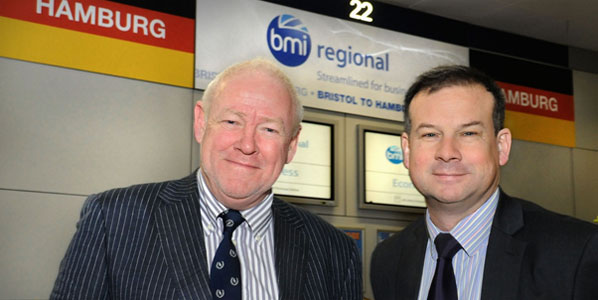 After five years of solid growth, averaging 10% per year between 2003 and 2008, Bristol Airport, the largest airport in the south-west of England and ninth busiest in the UK, has had to re-adjust to more marginal levels of growth of on average 1.5% over more recent years. “Our forecasts indicate that we could see passenger volumes return to the levels seen in 2008, when we topped 6 million passengers for the first time,” comments Aviation Director Shaun Browne for Bristol.

Most of this growth is as a result of its partnership with easyJet, a relationship born in 2001 when Go established its first base outside of London, launching 18 daily departures to 10 destinations. Today easyJet, the eventual buyer of Go from British Airways in 2003, has 11 aircraft at Bristol, serving 33 routes this April and offering nearly 60% of the airport’s scheduled capacity. “We have a strong focus on our existing carriers, and work with them to identify new opportunities. It is very much a partnership approach,” says Browne. Clearly it was this approach that led the airport to also court and ensnare Ryanair, with now a largely complimentary network – only five routes overlap those of easyJet from the 29 to be served in April 2013: Alicante, Malaga, Faro, Palma and Tenerife (both airlines also serve the Barcelona market – Ryanair operates to Gerona and Reus, while easyJet flies to El Prat). 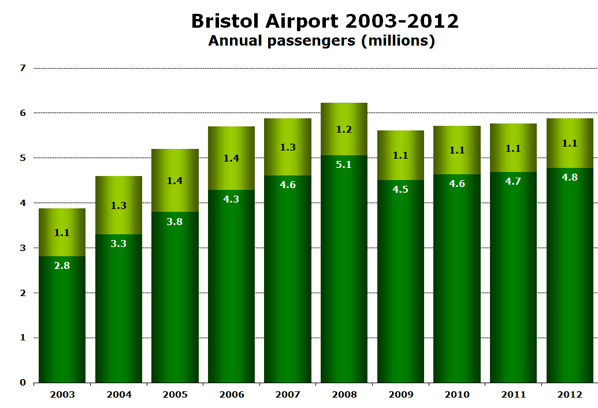 One of the key elements to the airport retaining its growth cycle, in a UK market where other airports have suffered years of decline before recovering, and also despite its blip in 2009, is the way it has tenaciously held on to its domestic traffic — standing firm at around 1.1m passengers for the last four years.  Given its geographical situation, serving the largest city (the city of Bristol is home to close to 500,000 people) in one of the UK’s peripheral regions, has perhaps made this job easier for it than other UK airports, but it is no small feat in a total UK domestic market than has declined from 50 million annual passengers in 2006 to 38 million in 2011. “We are proud of this performance, which has been achieved despite extremely tough economic conditions,” adds Browne.

Commanding 10 of the Top 12 routes places is easyJet, with its high frequency domestic services to Edinburgh, Glasgow, Belfast International and Newcastle seizing four of the first six slots. Spoiling the party are Ryanair, with its 16 weekly operation to Dublin at #3, and the airport’s main connection to global destinations — namely its four times daily service to Amsterdam at #5. The growth on this route is as a result of two of the daily flights being upgraded to a 100-seat, E190 at the start of the summer season from its existing 80-seat F.70 operation. 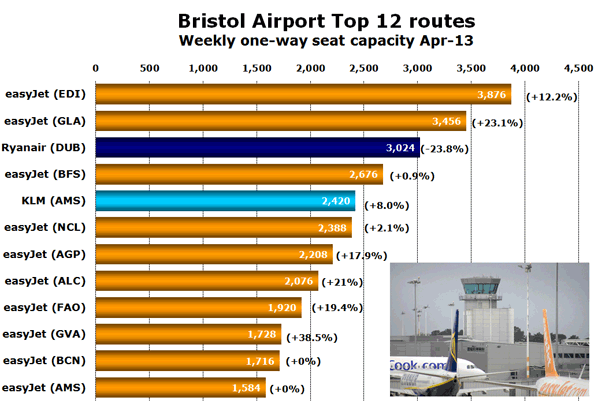 The Irish low-cost airline spoils another celebration for Bristol, as its route is the only Top 12 route which is set to decline its capacity in 2013 against that which was operated in the same month in 2012, as it has removed five of its weekly frequencies. Aer Lingus Regional has opted to match the low-cost carrier in terms of frequency on the Dublin route, with an increase to 17 weekly flights, however this has seen the operation switch from a 68-seat ATR-72 to a 48-seat ATR-42. Much of easyJet’s growth across its Bristol network has come as a result of the gradual replacement of its 156-seat A319 capacity with the introduction of the larger 180-seat A320 (23 weekly flights in April 2013, versus 15 in April 2012) as well as additional non-based inbound capacity.

Taking nearly 50% of weekly frequencies and seats are the UK and Spain markets. As mature markets from Bristol there is little change planned this summer, with nine less domestic weekly flights (down from 146 to 137), however due in part to easyJet’s increased use of A320s on its Edinburgh operation, the number of weekly seats has actually increased by 466 (+3%). Capacity to the #2 market Spain is similarly flat, with one extra weekly frequency and just 291 extra weekly seats. 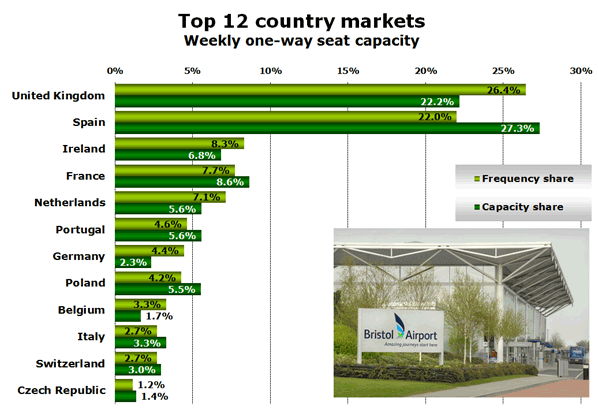 The two Top 12 country markets which are going to be experiencing the most significant capacity spikes this summer season versus last year are Germany (+74%) and Belgium (+69%). The former will be boosted by the re-start of Frankfurt operations on 07 April, this time under bmi regional (replacing Lufthansa which operated the route between March 2008 and May 2009), and indeed this week’s inauguration by the same airline of a Hamburg link (LINK TO NIBs), which will no doubt be crammed full of Airbus executives and engineers travelling between two of the air framer’s most significant locations. The Belgian boom comes following last October’s switch of supplier on Brussels Airlines’ Brussels route, changing from bmi regional’s ERJs to a 17 weekly service on flybe’s hired-in Dash 8 Q400s.

In it for the long-haul

Feed into a long-haul hub is a noticeable gap in Bristol Airport’s current route portfolio, with Continental dropping its New York Newark service in November 2010, after over five years of operation. The airport has aggressively promoted itself as a new point on the UK map to the MEB3, but will have to overcome some operational challenges first – the airport only has a 2,011m runway. Browne outlines his clear route development strategy here: “We work very hard to match the right airline to the right route. We are not in the business of encouraging new routes which are not sustainable for our airline partners, so we will sometimes sacrifice short term gain in favour of finding the right fit.” So should the operational performance challenges of a short runway be too great to overcome for the MEB3, this may lead Browne to Istanbul and Turkish Airlines, in terms of the most obvious solution for its next hub link when looking east. However, the airport was left off anna.aero’s recent list of new Turkish Airlines routes for 2013 – of which now eight routes from the 36 revealed have been confirmed by the airline.

That fact does not put off a proud and determined Browne: “We are in a privileged position in that we have a well balanced mix of market-leading carriers operating at Bristol. But this has not been achieved by accident – it is part of a deliberate strategy. As a result, we believe we have the best mix of full-service, charter, low-cost and regional airlines of any airport in the UK.”

Using RDC’s airportcharges.com, it is clear to see that the three main airports in the region — Bristol, Cardiff and Exeter — have priced themselves reasonably close to each other. Bristol Airport’s total airport charges for a 78-seat Dash 8 Q400, filled to a 65% load factor, are around 1,900 euros, very similar to those levied at Cardiff, but some 15% more expensive than those charged at Exeter. Total charges per passenger are therefore roughly the same at 31 euros for Bristol and Cardiff, representing nearly a four euro premium versus those to be paid in Exeter. With Cardiff Airport likely to return to public ownership, following a decision last month by the Welsh Government to take further steps towards ownership again, it will remain to be seen whether a new local owner will look to reduce charges in order to claw-back traffic which has been lost to its nearest and fiercest rival.