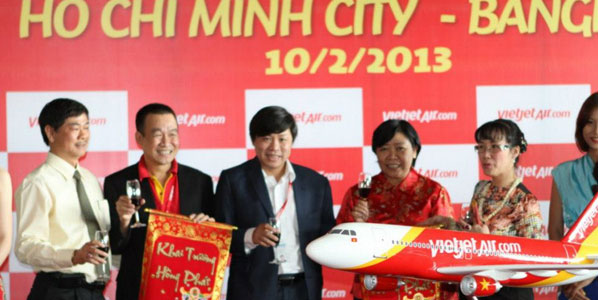 Following dynamic growth throughout 2012, VietJet Air is now Ho Chi Minh City’s second-largest domestic carrier and is now embarking upon an international expansion from the airport.

Vietnam’s largest airport in terms of passengers handled, Ho Chi Minh City Airport has a handling capacity of up to 17 million passengers. While plans for a replacement facility were approved throughout the 2000s, they will not materialise before 2020. Although traffic growth in Ho Chi Minh City can be expressed in single digits, the country’s busiest international airport is set to see considerable pressure on its infrastructure as it nears its capacity.

According to the airport’s operator, the Southern Airports Corporation, 16.7 million passengers used Ho Chi Minh City in 2011. This constitutes an increase of 8% over the preceding year. Examination of capacity data for the last decade shows, that while both domestic and international capacity increased significantly, the former grew at double the rate of the latter in that period. 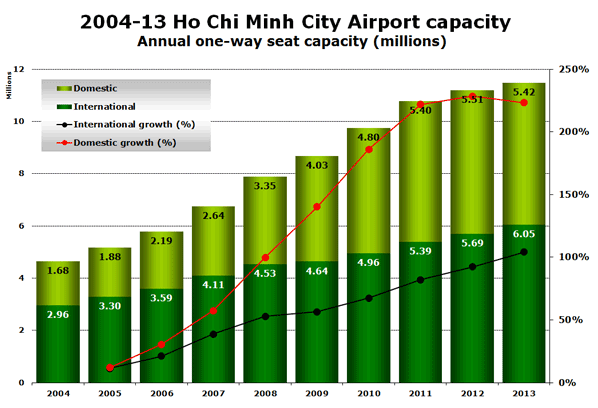 China is the largest international market

The country’s flag carrier, Vietnam Airlines, is the largest capacity provider on international routes from Ho Chi Minh City, and in the w/c 18 February it commands 30.6% of weekly seats. The second largest carrier in this market, Cambodia Angkor Air, which operates services to Phnom Penh and Siem Reap, has less than a sixth of Vietnam Airlines capacity (6% share overall). Effective as of 11 February, VietJet Air is the latest carrier to offer international capacity from Ho Chi Minh City, following the launch of Bangkok as its first-ever international destination. 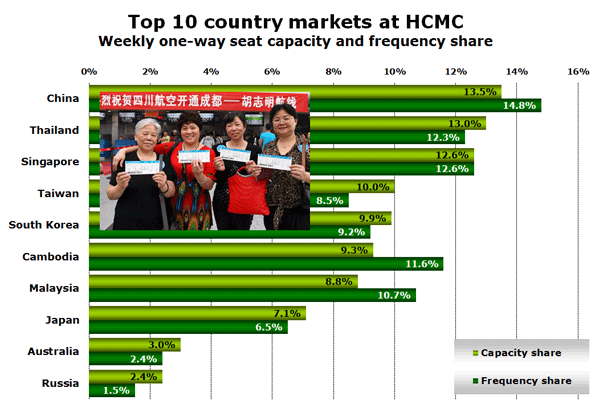 Just over 40% of the airport’s total capacity is dedicated to international services, with 20 country markets served from Ho Chi Minh City in February 2013. Only three of those have a share of more than 10% of both seat capacity and frequency in the segment. China is the largest international country market and accounts for 13.5% of seat capacity and just under 15% of frequencies. Five destinations are served in the Middle Kingdom with a total of 87 weekly frequencies operated by seven airlines, of which only Vietnam Airlines offers more than one destination.

In the domestic market, Vietnam Airlines retains its leading position, even though its market share in terms of weekly seats is nine percentage points lower in w/c 18 February than it was in the corresponding period the year before. Of the 18 destinations it serves across the country from Ho Chi Minh City, only one was launched in the last year (six weekly services to Thanh Hoa commenced last week), but as many as 13 saw capacity growth. In fact, in February 2013 the airline offers nearly 50% more seats in the domestic market from Ho Chi Minh City than in 2012. VietJet Air’s domestic expansion from Ho Chi Minh City included services to Vinh, Huế and Phu Quoc, all of which launched towards the end of 2012.

VietJet Air currently operates to seven domestic destinations providing 13.7% of seat capacity at Ho Chi Minh City in February 2013. This was enough to overtake Jetstar Pacific as the largest low-cost carrier operating at the airport. While Jetstar kept its Ho Chi Minh City operation relatively steady (only the route to Hanoi saw capacity reductions over last year), the appearance of a new rival meant that it lost five percentage points off its share in the domestic market.