Strong January for both Airbus and Boeing; 84% of all deliveries are narrow-bodies In January, Cebu Pacific became the first carrier in the Philippines to take delivery of a sharklet-equipped A320. Lance Gokongwei, CEO of the airline, said: “While Cebu Pacific already is one of the great success stories in the Asian low-cost market, the additional economic and environmental efficiencies will enable us to further improve our competitive position in the fast-growing market.”

After a busy December, both Airbus and Boeing delivered significantly less aircraft in January of this year. With the total aircraft deliveries standing at 35 and 39 respectively for the two manufacturers during the first month of the year, both companies have had the second best January since anna.aero began monitoring aircraft deliveries in 2008. Compared with January 2012, Airbus delivered two less aircraft, while Boeing handed over one more airframe. For the second consecutive year, Boeing delivered more aircraft in January than its European competitor, this time by two narrow-body and two wide-body aircraft. 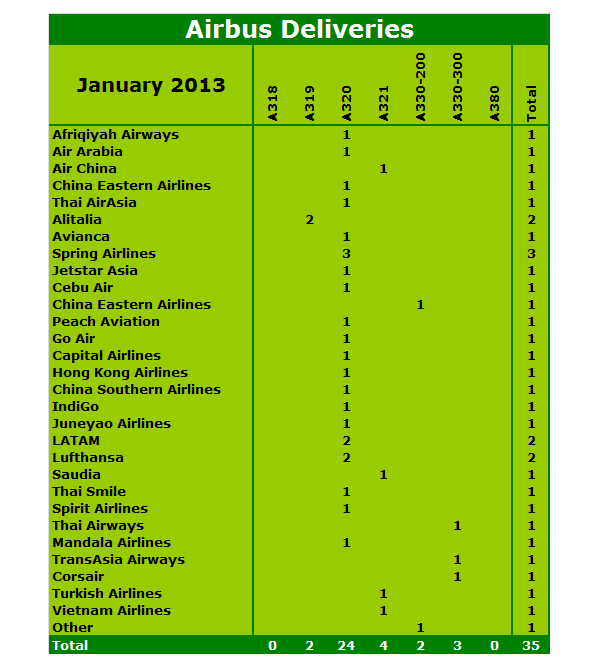 Airbus closed the month with a total of 35 delivered units, which constitutes less than a half of aircraft delivered in December 2012, and two units less than in January last year.

Once again, deliveries in January were led by the A320 family, with a total of 30 single-aisle jets provided to airlines worldwide. The Shanghai-based Spring Airlines was the largest recipient of the type, taking a total of three units. Alitalia took delivery of two A319s, while LATAM and Lufthansa each received two A320s.

Only five wide-bodies were delivered in January, 12 less than in the preceding month. Following last month’s delivery of five A380s, in January, Airbus did not deliver a single Superjumbo. Three A330-300s were delivered, one each to Thai Airways, TransAsia Airways and Corsair. 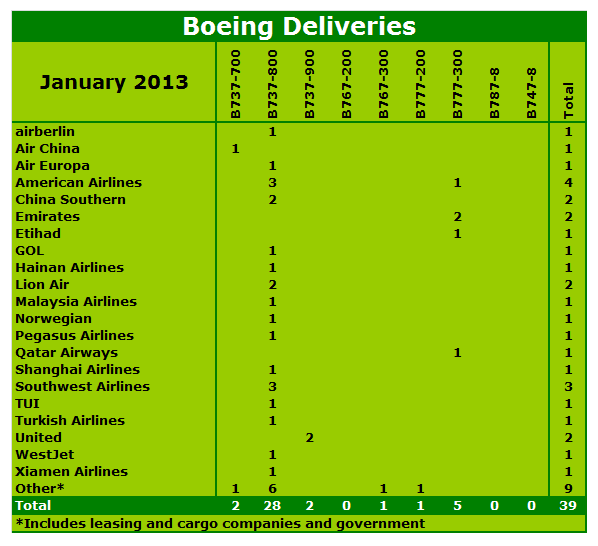 Boeing closed January with a total of 39 units delivered, 25 less than in the preceding month and one more than in January 2012.

18 less wide-body units were delivered in January 2013 than in December 2012, and the US air framer weakened its year on year performance, delivering three units less than the 10 it managed in January 2012. Following the record monthly delivery of 11 787-8s in December, Boeing suspended deliveries of the type due to on-going investigation into safety issues.  Nevertheless, a total of five 777-300s was delivered in January, including two for Emirates Airline, as well as one 767-300 and 777-200.