When VietJet Air launched flights between Ho Chi Minh City and Hanoi on 25 December 2011, it became Vietnam’s first privately-owned low-cost airline. In mid-January this year it received its sixth A320 and now serves seven domestic points from Ho Chi Minh City, and three from Hanoi. This week saw the carrier launch its first international service from Ho Chi Minh City to Bangkok in Thailand. The airline follows a low-cost business model operating its A320s in a single-class 180-seat configuration and charging for assigned seating, checked baggage and food (including hot meals and so-called “junky” food). Three fare types are available; Promo, Eco and Flexi though even with the Flexi fare passengers have to pay for checked baggage.

Not surprisingly the airline’s route network is dominated by the link between the country’s two major cities, Ho Chi Minh City in the south, and Hanoi in the north. VietJet Air serves this market with eight daily flights representing almost 40% of its weekly capacity. Competition on the route comes from Vietnam Airlines, Jetstar Pacific and Air Mekong. 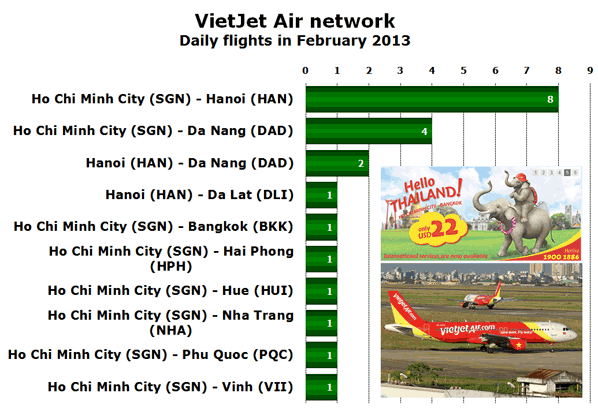 The only other route served with more than two daily flights is between Ho Chi Minh City and Da Nang which sees four daily flights and is also served by Vietnam Airlines and Jetstar Pacific.

Based on the airline’s booking tool for flights for the week beginning 11 February, anna.aero has calculated that the airline’s fleet of six A320s typically operates a total of 42 flights per day. All six aircraft are based in Ho Chi Minh City with the earliest departures at 06:10 (to Hanoi) and 06:20 (to Da Nang). Two of the six aircraft return to base before 22:00 while just one aircraft arrives back after midnight.

Bangkok is the airline’s first international service but others are likely to follow later in the year. Plans are for the fleet to grow by three additional aircraft in each of the next three years taking it to 15 aircraft by 2015. Although Vietnam Airlines will remain the dominant domestic carrier for the foreseeable future, the competition between VietJet Air and Jetstar Pacific for second place in the domestic market looks likely to intensify in the coming months.