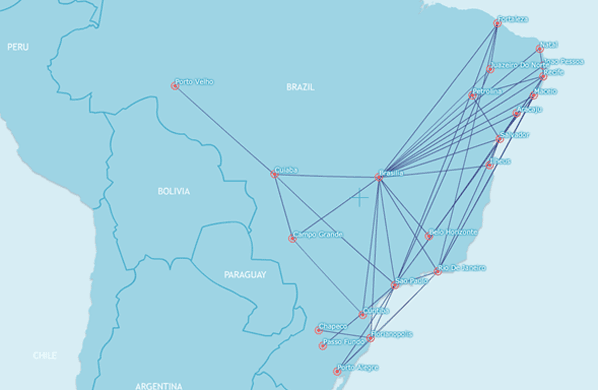 Having withdrawn from its only international route to Bogota in Colombia, Avianca Brazil, formerly Oceanair, now concentrates all of its 34-aircraft Airbus fleet on the Brazilian domestic market (Source: FlightMaps Analytics - Innovata).

Part of Avianca-TACA, the Synergy Group-owned Latin American airline empire, and Brazil’s fourth largest domestic carrier, Avianca Brazil is likely to slow down its recent break-neck capacity increases in 2013, after a rapid growth phase which has seen it more than double in size in the last two years. The carrier, still legally known as Oceanair, but approved by Avianca to use its brand name, is committed to taking a further five A318s over the next year, but these are now more likely to represent replacement units for its dwindling Fokker 100 fleet rather than being additional growth aircraft.

While its ascent in the Brazilian domestic market has been rapid, Avianca Brazil, trails considerably in the wake of #3 carrier, AZUL-Trip, currently being less than a third its size in terms of the total weekly capacity of 2.5 million seats. Taking over 1.8m of those seats is the combined mass of market heavyweights GOL and TAM, which operate nearly 11,000 weekly flights from a total of over 17,500.

Avianca Brazil is now only serving the Brazilian domestic market having in the last year withdrawn from the only international market it served — namely São Paulo Guarulhos to Bogota. Removing its daily A319 operation has left it down to a straight fight between Avianca with its double daily A319/A330 operation, and LAN Colombia with its daily A320 flights. Concentrating its efforts solely in the domestic arena, the carrier operates hubs in Brasilia and São Paulo Guarulhos, with significant operations at both Rio de Janeiro airports, as well as domestic flights only facility São Paulo Congonhas. 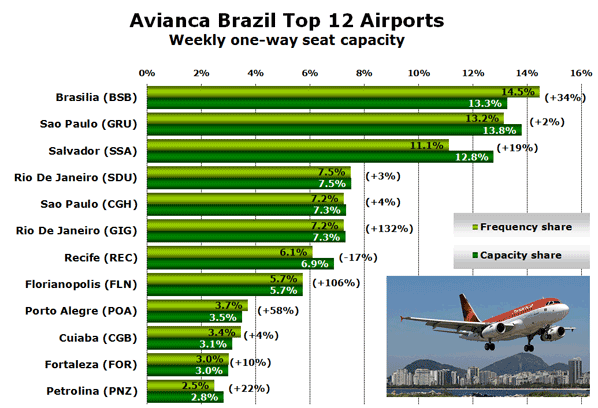 The carrier has clearly been in a growth phase over the last 12 months, taking delivery of nine aircraft, and with all but one of its Top 12 airports, in terms of weekly seat capacity, experiencing capacity increases. The fastest growing airport is Rio De Janeiro Galeão, with a huge 132% expansion, seeing it move up into #6 spot in terms of importance to Avianca Brazil’s operations. New services to Brasilia (14 weekly A318), Fortaleza (daily A318), Maceio (daily A318) and Porto Alegre (daily A318) as well as generic growth on existing services to Recife (up from daily F.100 to daily A318) and Salvador (extra 7 weekly to 21 weekly A318) have driven this increase. Falling from fourth to seventh is Recife, Brazil’s fifth largest city on the north-east tip of the country. Capacity reductions seem to have been the order of the day, with services to the capital Brasilia, São Paulo Guarulhos, Natal and Salvador all being trimmed, while daily Fokker 100 flights to Fortaleza have been disposed of all together.

The demise of WebJet, consumed and then closed down by owner GOL in November last year, has opened up a capacity void which Avianca Brazil seems to have been more than happy to fill in its two biggest markets – São Paulo Guarulhos to Salvador and Rio de Janeiro Santos Dumont to São Paulo Congonhas. On the former route, WebJet controlled 10% of capacity in this market; following its withdrawal, Avianca Brazil reacted with double digit growth and new entrant AZUL-Trip has also jumped in to make it four-way split on the route. While these two carriers have reacted positively, the incumbents, GOL and TAM, have merely tinkered around the edges, with only marginal capacity tweaks. 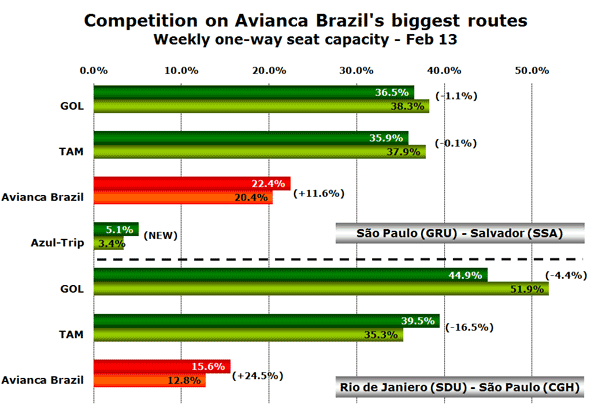 Webjet’s departure from the Rio de Janeiro Santos Dumont – São Paulo Congonhas route has provoked an even stronger reaction from Avianca-Taca’s Brazilian off-shoot, with nearly 25% more weekly seats being added since February 2012. This is in stark contrast to the route’s two heavyweights, which both command around 40% of the market, as they have pulled a combined 6,500 weekly seats from the city pair.

Despite the Brazilian domestic market growth slowdown, which has contracted by 8% between February 2012 and February 2013, passenger traffic at Avianca Brazil may well have benefited from other quarters, particularly if its parent had been able to acquire TAP Portugal. While the international feed from the Portuguese national carrier’s routes to 10 destinations in Brazil would have no doubt been a valuable income stream, the airline could instead benefit from becoming part of the Star Alliance, alongside other members of the Avianca-Taca grouping.