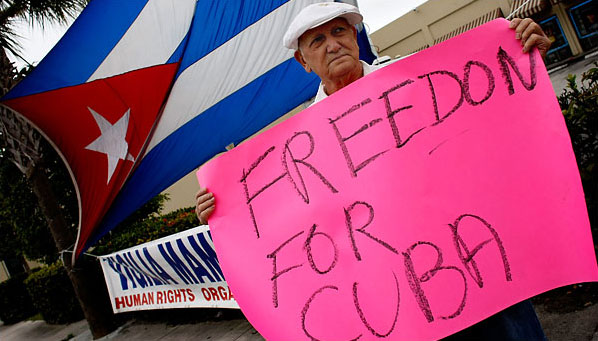 Who is Don? Why is he so important for Cuba? Perhaps he knows whether President Obama will allow scheduled flights between the nations rather than the 11 US destinations permitted to provide limited charter flights only.

With less than 100 miles separating the two nations across the straits of Florida, the potential for US – Cuban traffic is massive: there are around 2 million Cubans living in the US (according to US Census Bureau data 2010) and Cuba is the fifth largest immigrant sending nation to US – after Mexico, China, India and the Philippines. However, the economic embargo imposed by Uncle Sam still excludes the provision of scheduled flights between the two nations, resulting in a no-show for the US in Cuba’s top country markets. 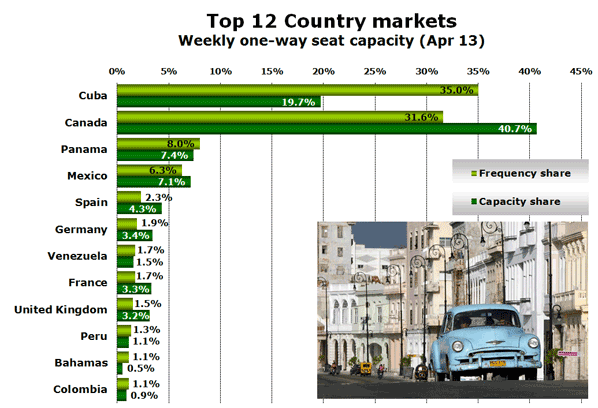 The fastest growing country market in the top 12 is Colombia, which from its small base, has grown by 50% between the two sample months — April 2012 and April 2103 — due to Avianca introducing two extra weekly A318 rotations from Bogota to Havana. Derived from a more significant base traffic, the 44% spike in capacity in the #2 country market Canada, represents a marked increase for such a large existing market. While WestJet and the Cuban national carrier, Cubana, have trimmed weekly capacity by one flight each, Air Transat (+32 weekly flights) and Sunwing Airlines (+16) have both seriously ramped-up seats in April 13.

Iberia to blame for Spain-Cuba slump

Of the top 12 country markets, it is Spain that has contracted the most – this decline coming from the hands of struggling carrier Iberia. From 1 April 2013 it will suspend its seven weekly A340 operations between Spain and Havana and Santo Domingo. Fellow incumbent Air Europa has reacted, by offering an extra three weekly A330 rotations (up to 10 weekly) between the two nations, but it was not enough to cover the 25% slide in weekly capacity. Despite the cuts, Spain remains the biggest European market, although Germany is closing in, as it has grown by 11% year-on-year.

Cuban air travel is set for a boom in 2013, if the annual seat trends unearthed by anna.aero continue. In the 12 months ending in February 2013, one-way seats increased by around 20% against the previous 12 months, and that performance comes off the back of a not-so-sluggish 8% increase in the year preceding that. 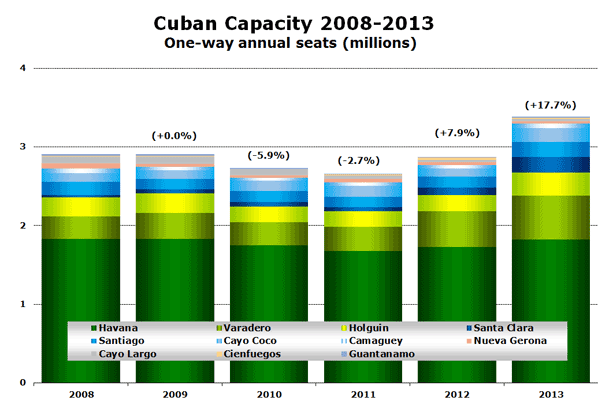 Unsurprisingly, flights to Havana dominate the overall Cuban traffic profile, with the capital commanding just over 50% of annual seats. This governing share is boosted by the domestic market, which for Havana itself represents 16% of all flights in Cuba, as the capital is connected to 13 other points on the island, some with just a weekly flight, but some, like Holguin, with up to four daily flights on the near 700-kilometre route. The #2 airport is the resort town of Varadero in the Matanzas province, which has doubled in terms of the number of annual seats between 2008 and 2013.

Four of top 5 airlines to grow

The importance of the inbound Canadian dollar to Cuba’s economy is clear, with Toronto-headquartered Sunwing Airlines swiping the number one airline spot from Cubana, despite the latter’s 10% annual growth, and with four Canadian airlines inside the top 12. Operating 85 weekly services to seven Cuban destinations in April 2013, half of which are to Varadero, the carrier offers flights from 14 Canadian cities and has increased its weekly seats by 23%. 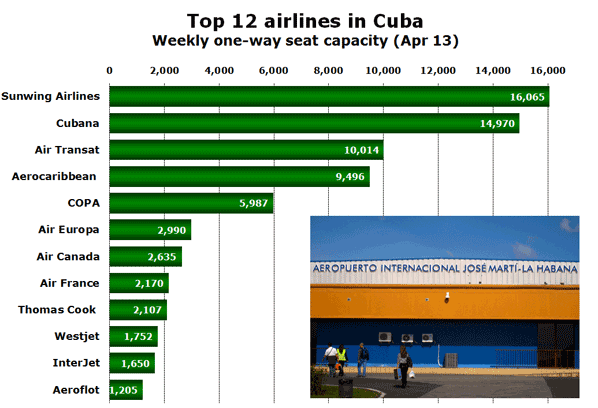 Predominantly offering domestic flights, but also flying to regional points in Central America and the Caribbean, is ATR-42/72 operator Aerocaribbean. The carrier, which celebrated its 30th anniversary in 2012, has been ousted from third place given Air Transat’s surge in its Cuban flying programme this year, but it was also the only airline in the top five to reduce weekly seats. With COPA’s services to Panama City growing by 37% annually, passenger traffic into Cuba would seem to be set for a buoyant 2013.