Leeds Bradford’s Commercial Director, Tony Hallwood, presents Steve Heapy, Jet2.com’s CEO, with a glass globe plaque to mark the airline’s tenth anniversary. Also present during the event was Philip Meeson, Jet2.com Executive Chairman, who commented: “We’d like to thank our loyal customers for their on-going support in making the last 10 years so successful. Jet2.com enjoyed a fantastic welcome in the region and the significant growth we’ve achieved in the past decade, is largely thanks to our loyal customers continuing to make us their airline of choice.” anna.aero includes  full analysis of Jet2.com this week . To mark the special day, Jet2.com recreated its very first flight (crew and some of the passengers, too!) from Leeds Bradford to Amsterdam. Presenting the celebratory cake for jet2.com’s 10thanniversary in Amsterdam were the airline’s Steve Heapy, CEO; Steve Lee, Commercial Director; Phil Ward, Passenger Sales Director; and Nick Louden, Airports and Tourism Organisations Manager. 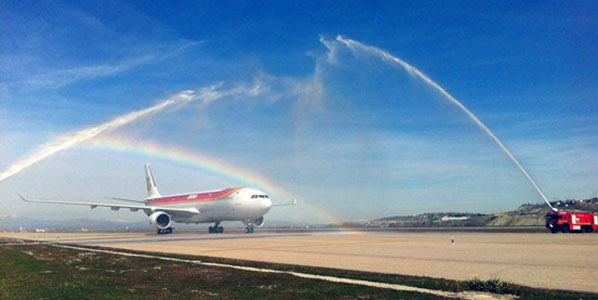 Iberia took delivery of the first new A330-300s last week, revealing the revamped interiors in both business and economy. Further seven aircraft of the type are scheduled to join the airline’s fleet through March 2014. In addition, beginning in May, Iberia’s fleet of A340-600, which it uses on flights to Latin and North America and Angola, will be upgraded to feature the new cabins.