Perhaps surprisingly, Kraków was not a host city for EURO 2012, resulting in it not receiving the airport infrastructure development that was experienced by others. However, the new terminal is now underway, and due to be commissioned by the end of 2014.

Poland’s second largest city and former capital of the country, Kraków has become an increasingly popular destination for both business and leisure travellers, lured by dynamic economic growth in the southern Lesser Poland region, as well as by the charms of the city proper (together with the nearby Wieliczka Salt Mines, the entire old town of Kraków was included in the original UNESCO World Heritage Site list in 1978). In fact, over nine million tourists visited the city in 2012, according to a survey by the Lesser Poland Tourism Organisation, establishing a new all-time high. International arrivals (70% by air) made up a third of this number, a figure clearly reflected in the fortunes of Kraków Airport, which serves the highly appealing city and region. 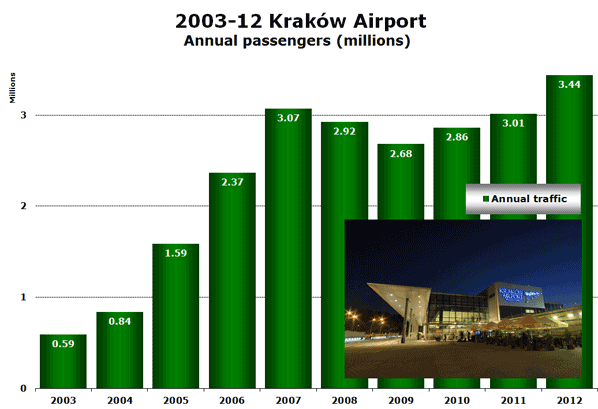 Kraków Airport has historically been the country’s largest regional airport. While this meant handling a meagre 600,000 annual passengers in 2003, Kraków (just as other Polish airports have) has greatly benefited from the country’s accession into the EU in 2004, virtually doubling its traffic within a year (88.6% annual growth in 2005) and then once again two years later (93% growth on 2005). While the magic three million passenger landmark was first achieved in 2007, two years of traffic losses then followed. Those were only fully recovered 2012, when the airport closed the year with a total of 3.44 million passengers (14.1% growth vs. 2011).

After a prolonged courtship, in mid-December 2012 the launch of a Ryanair base in Kraków was announced. An examination of S’13 schedules shows that the additional capacity from two based aircraft will make the low-cost carrier #1 both in terms of capacity (49%) and frequencies (38%). Changes to Ryanair’s offering from Kraków in July 2013 include the withdrawal of Budapest (thrice-weekly in S’12) and introduction of services to Birmingham (daily), Dortmund (4), Gothenburg City (3), Kos (1), Manchester (3) and Cork (3).

Other low-cost carriers also will increase their presence at the airport this summer. easyJet, for which Kraków is the only point served in Poland following its withdrawal from Gdańsk and Warsaw, will offer 14% more seats this summer, as it launches four-weekly flights from London Southend in June. Notably, Kraków is one of the few Polish airports without Wizz Air services, as the airline has a base in nearby Katowice. 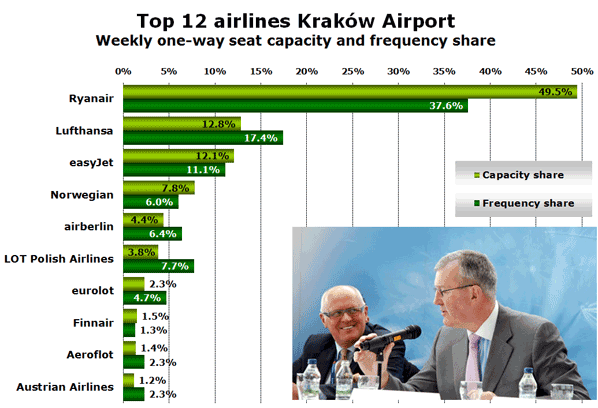 Struggling LOT Polish Airlines, which in the 1990s aimed to create a secondary hub in Kraków, has gradually reduced international capacity at the airport, as it has concentrated again on a single hub operation in Warsaw. The most recent cuts involve four-weekly flights to Athens and its daily service to Paris CDG, effective with the end of current winter season. While the Greek route remains vacant, easyJet continues to provide daily flights to Paris.

Trying to fill the gap left by LOT Polish Airlines’ virtual departure from the international market in Kraków last year was eurolot, the regional subsidiary of the Polish flag carrier. Services to a number of European destinations were taken up, of which four will not be relaunched in S’13. The airline continues to operate flights to Amsterdam (6 weekly flights), Zürich (6), Lviv (2), and Dubrovnik (1), and will launch a low frequency service to Varna in Bulgaria.

Four Central European hubs, two from Lufthansa and one each from airberlin and Austrian Airlines, top the list of most frequently served destinations from Kraków. While both Lufthansa and Austrian Airlines are LOT Polish Airlines’ alliance partners, they both benefit from the latter’s fairly limited long-haul offering via Warsaw, which eurolot serves from Kraków on behalf of LOT with 47 weekly frequencies in S’13. 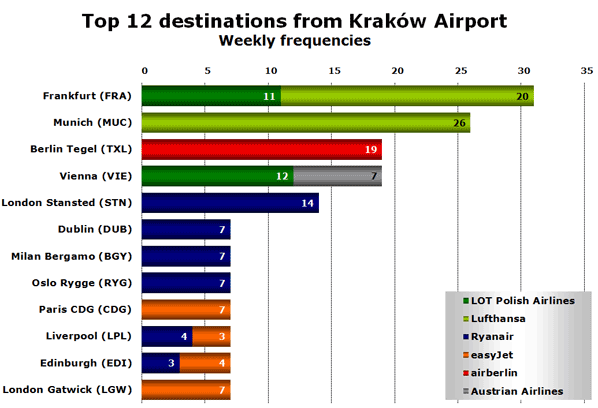 Other network carriers will also explore this underserved market, notably so airberlin, which from July 2013 will operate an additional daily service on the route to Berlin Tegel, as well as Aeroflot. The Russian carrier, which launched the Moscow Sheremetyevo service in late April 2012 with four-weekly frequencies, decided to increase frequencies to daily for this SSJ100-operated route. Additionally, Alitalia returns to Kraków in spring 2013 with thrice-weekly flights to Rome Fiumicino – a route it briefly operated in 2000.

Unlike in other large European countries, domestic traffic bypassing Warsaw is virtually non-existent, although last year it seemed that the start-up OLT Express would change the status quo. From Kraków, the airline operated to five destinations (Bydgoszcz, Gdańsk, Łódź, Poznań and Szczecin) with a mix of ATR72s and A320s. But it failed to make it through summer 2012, leaving domestic traffic entirely to eurolot. The latter consequently dropped its Szczecin service at the end of 2012, which it operated since October 2011, and now operates two routes – to Warsaw (47 weekly frequencies, code-share with LOT Polish Airlines) and Gdańsk (11).