The US-AA merger – what the route map will look like 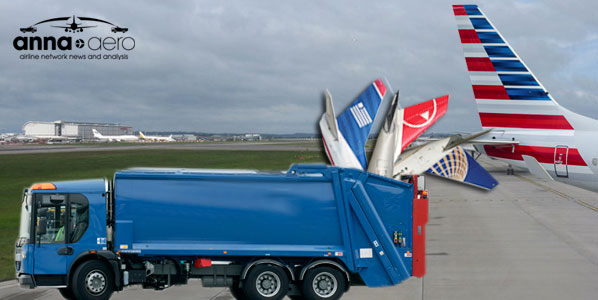 Another tailfin in the trash: US network airline brand US Airways is consigned to the history books, following Continental Airlines and Northwest Airlines to leave just three – American Airlines, Delta Air Lines and United Airlines.

US airline consolidation is complete. Just in case you have been living in cave for the last week, there will be only three US network players by the fall (regulatory clearance is expected in Q3 2013): American, which will marginally become the world’s largest airline, United Airlines and Delta Air Lines. In terms of capacity, these three, plus Southwest Airlines will dominate 90% of the domestic seats.

Outside of the combined carrier’s 10 recognised hubs and focus airports (in order of size — Dallas/Fort Worth, Charlotte, Miami, Chicago O’Hare, Philadelphia, Phoenix, Washington National, Los Angeles, New York La Guardia and New York JFK), which will represent nearly 60% of the new airline’s weekly seat capacity, a host of second tier airports will be jostling to maintain their based aircraft and gate space with the new American Airlines. At the largest of these airports, Boston Logan, US Airways is the #3 operator (AA is fifth) behind JetBlue Airways and Delta, but the new united carrier will jump to second place with 23% of all seats, and will be more than double the size of United in fourth spot, and four times larger than Southwest. 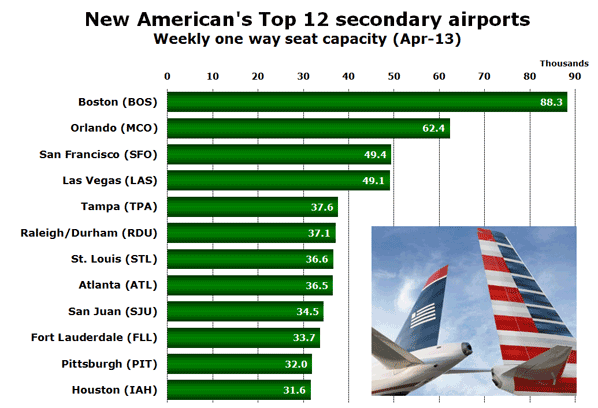 The standing for the conjoined airline will improve even more markedly at San Francisco, where pre-merger American is in fifth spot (US is 6th), lagging the United hub, Delta, Virgin America and Southwest. After the merger is finalised, American will barge its way into second place, still only one-fifth the size of United, but commanding 10% of all seats from the Californian airport. Looking at low-cost dominated Fort Lauderdale, US Airways held the lowly position of sixth (AA was seventh). However, the merged entity will become the largest network carrier at the Florida airport, but will still trail JetBlue, Spirit Airlines and Southwest.

Network overlap is very limited, the two airlines only compete on 12 of their 900 amalgamated routes, which is one reason that many industry observers feel the merger will be viewed far more favourably than when US Airways tried to tie the knot with Delta in 2006. As US Airways is expected to leave the Star Alliance, and the combined carrier will join oneworld, the fact that Heathrow will be the airline’s number one international port-of-call is significant. In the process, new American will become the largest US network airline at the London airport, boasting an additional 3,800 weekly seats than its nearest rival United. The tie-up is also anticipated to see oneworld’s global market share will rise from 26% to 34%. 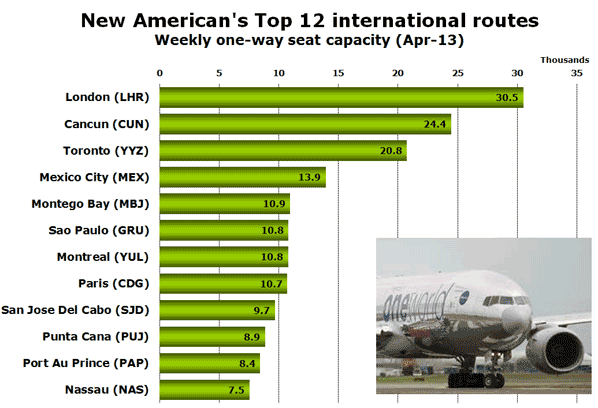 With one exception, of all the remaining top 12 routes, either American or US Airways was already the leading network airline across all the above destinations, so the fused company will further consolidate its dominance in these markets. It is as Cancun, where it will leapfrog United to become top dog, and at the same time hold a 40% advantage over its rival in terms of seats, and become more than four times bigger than Delta.

American to fly to Israel, Netherlands and Belgium (again)

The new company will offer flights to 336 destinations (218 domestic, 118 international) in 56 countries. However, the merger will see American return to Belgium (it cancelled its New York JFK flights on 6 November 2012) and see new operations at both Tel Aviv and Amsterdam, neither of which it currently serves, but US Airways does fly both daily from Philadelphia. 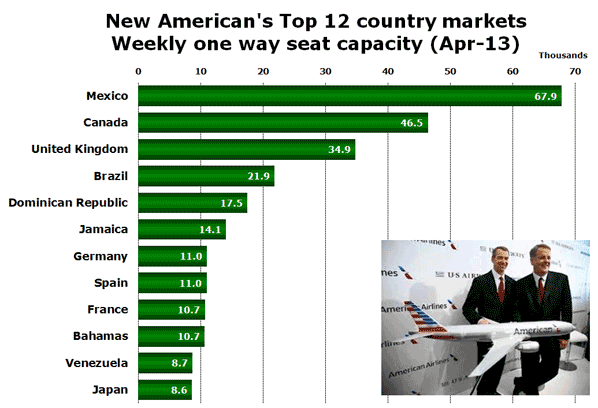 The biggest country market beneficiaries of the deal are Germany, Brazil and Jamaica. While for pre-merger American, Germany is only its 28th largest country market in its portfolio, it is US Airways’ #3, which has pushed the nation up to seventh place when both airlines come together. Roles are reversed when it comes to Brazil, which is only the 17th biggest country market for US Airways, but for its merger partner was rated as fourth most significant, resulting in Brazil taking the fourth spot overall. Two country markets now inside the top 12 – namely Venezuela and Japan – were previously not even served by US Airways. Only time will tell whether the regulators will have a significant impact on these markets when they make their recommendations later in the year.