To mark its tenth anniversary, Jet2.com recreated the very first flight it offered. Aircraft, crew and even some of the passengers were gathered together once again and flown from Leeds/Bradford to Amsterdam.

Jet2.com recently celebrated its tenth birthday, a significant milestone for the UK-based LCC which operates from eight bases in the north of the country. The carrier has outlasted many other UK LCCs such as bmibaby, buzz, EUjet, flyglobespan and go, and has carried over 28 million passengers since its first flight on 12 February 2003 between Leeds/Bradford (its home base) and Amsterdam. After growing rapidly in its first five years, the airline retrenched in 2008 and 2009, before growing again in 2010 (by 9.3%), 2011 (by 30.2%) and 2012 (by an estimated 13%). Average load factors in recent years have been well above 85% for the whole year. With capacity growing once again this summer, the airline could be on track to carry five million passengers in a single year for the first time. Most of the airline’s traffic is between the UK and mainland Europe, but for the last few years it has carried between 100,000 and 200,000 passengers annually on domestic routes, primarily between Belfast International and Leeds/Bradford. 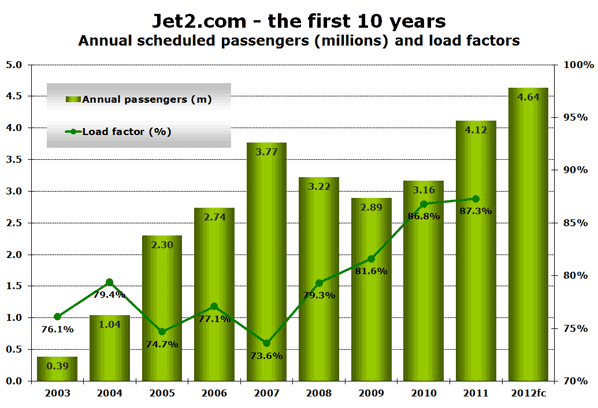 Owned by the Dart Group, the airline’s business model is a little different from a typical LCC, with a heavy focus on Mediterranean leisure destinations operated in the peak summer months. Last year, Jet2.com carried over seven times as many passengers in the peak July and August months as it did in January. 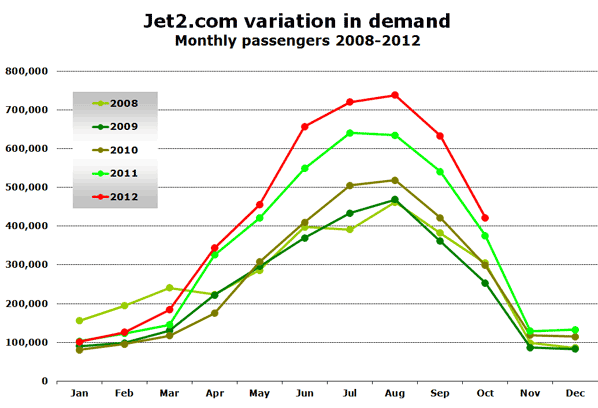 This extreme seasonality is made possible by the fact that the majority of the airline’s fleet of 42 aircraft are relatively mature 737-300s (27 aircraft) and 757-200s (11 aircraft), whose ownership costs are relatively low and are therefore only flown when the airline feels there is sufficient, profitable demand.

Manchester gaining on Leeds/Bradford as #1 base

Since the summer of 2011, Jet2.com has operated from eight bases across the UK, Belfast International, Blackpool, East Midlands, Edinburgh, Glasgow, Leeds/Bradford, Manchester and Newcastle. Scheduled seat capacity this summer (first week in August) is up almost 30% compared with summer 2011, as the airline continues to expand its network 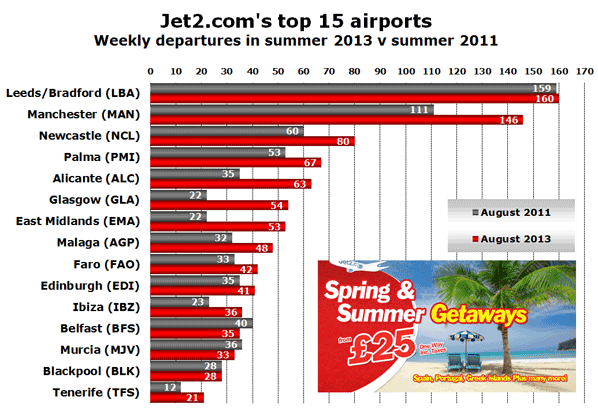 Palma de Mallorca is the airline’s leading summer destination, ahead of Alicante, Malaga and Faro. Alicante has been the fastest-growing, with the number of weekly flights growing by 80% in the last two years. Malaga frequencies have increased by 50% during the same period. Over 40 destinations are served in mainland Europe, plus Tel Aviv in Israel. Apart from seaside destinations around the Mediterranean, the airline also serves some ‘city-break’ destinations such as Amsterdam, Barcelona, Berlin, Budapest, Cork, Düsseldorf, Geneva, Krakow, Nice, Paris, Prague, Rome, Toulouse and Venice. The airline does not currently operate any flights to Scandinavia, though it did link Newcastle with Bergen between April 2006 and March 2008.

Over 20 new regular routes this summer plus ‘exotic’ weekend breaks