Volaris snatches #1 ranking in Mexico from Interjet in December; domestic traffic up 10% in 2012 to record 28 million Volaris now stakes a claim to nearly a quarter of the Mexican domestic market. Its domestic network expansion, including the recently launched Mexico City to Mérida route (above), as well as twice weekly A319 operations from the capital to Tuxtla Gutierrez in  this week’s latest airline route news .

According to data from the Mexican aviation authorities (DGAC), Volaris carried more passengers than any other single airline in the Mexican domestic market in December 2012, grabbing the position from Interjet which had been leading the way since December 2010. Volaris claimed 23.3% of the Mexican domestic market, while Interjet achieved a 22.9% share, down from the 26.5% share in January 2012. However, AeroMéxico and AeroMéxico Connect still had a combined share of 34.6%, though this is the airline’s lowest share of the market since the demise of Mexicana in August 2010. In December, for the first time ever, the country’s LCCs (Interjet, VivaAerobus and Volaris) carried more than 60% of the country’s domestic air passengers. 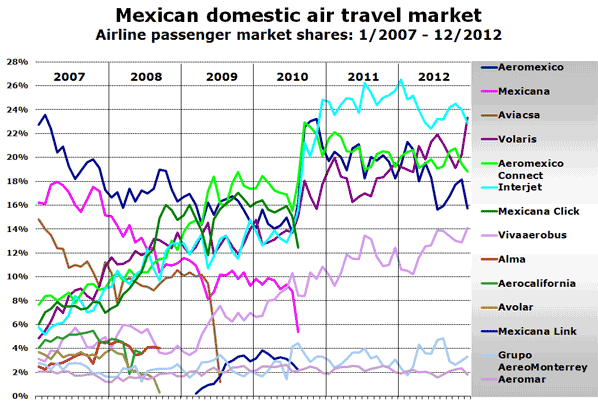 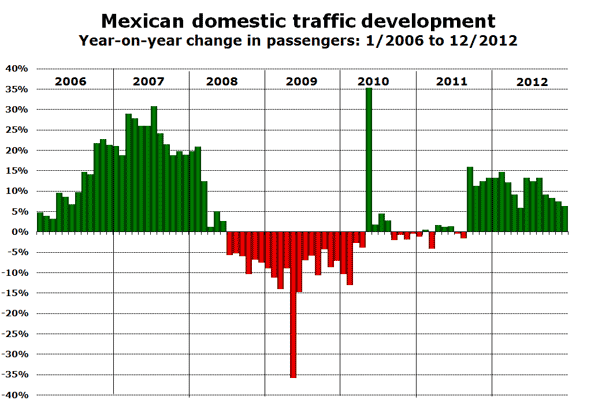 International traffic also grew solidly last year with passenger numbers up 7% to 27.1 million. The leading airlines serving the international market to and from Mexico in 2012 were AeroMéxico (3.27m), American Airlines (3.02m), United (2.97m), Delta (1.69m), US Airways (1.62m), Alaska Airlines (1.46m), Volaris (1.28m) and ExpressJet (1.22m). Since ExpressJet was operating its services on behalf of Continental Express (which is now part of United), it can be argued that United is the leading airline serving the Mexican international market. However, this is likely to change once American Airlines and US Airways complete their merger at some point in 2013. Mexican carriers typically accounted for between 16% and 26% of the international market, averaging 21.6% for the year as a whole. US carriers in comparison carried on average over 55% of all international passengers. 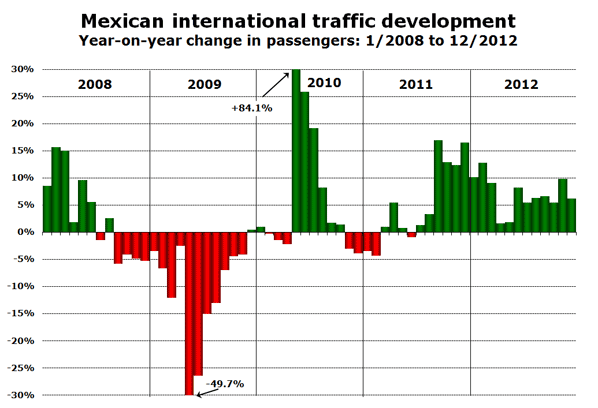 Not surprisingly, all this passenger growth has benefited the country’s leading airports, with Mexico City and Cancun, the country’s two busiest, both reporting passenger growth of between 11% and 12% in 2012. Mexico City almost passed the 30-million mark for the first time in its history and continues to process just over one-third of all passengers passing through Mexican airports. 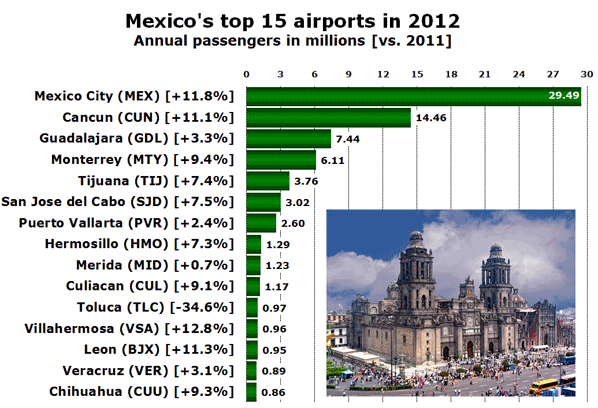 Just 10 airports handled more than one million passengers last year, down from 11 in 2011 as Toluca continued to see passenger numbers fall. The secondary airport for Mexico City handled some four million passengers in 2008, but after Mexicana’s collapse, most of the LCCs that had used the airport as an alternative to slot-constrained Benito Juárez International, have gradually moved their operations to Mexico City as slots became available. However, starting on 25 February, AeroMéxico Connect will launch daily flights from Toluca to Cancún, Guadalajara and Monterrey using Embraer E-jets. While the start of the summer season will see VivaAerobus introduce flights to Tampico and Villahermosa. Toluca therefore looks likely to re-join the “millionaire’s club” in 2013.