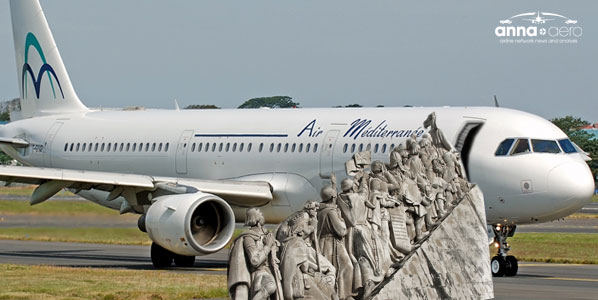 Portugal discovered: two Portuguese cities, Lisbon and Porto, join Air Méditerranée's network this summer. Split is another first for the airline in the coming season.

Based in the southern French Tarbes-Lourdes-Pyrénées Airport, Air Méditerranée operates a mixed fleet of nine narrow-body Airbus A320 family and Boeing aircraft. The charter-scheduled mix formula adopted by the carrier indicates high seasonality of its routes, and a varying number of French airports from which it offers exclusively international destinations. To date, the airline has announced 11 new routes for the summer season 2013.

Of the 11 new services already announced for S’13, as many as five will originate in the southern French port city of Marseille – Dakar, Split, Corfu, Kos will each be served with weekly flights, while Oujda in north-eastern Morocco will be offered with twice-weekly frequencies. Paris CDG will see three new destinations, as Air Méditerranée launches twice-weekly departures each to Casablanca, Lisbon and Porto.

The Portuguese capital, Lisbon, will see the most new flights added by Air Méditerranée this summer (in addition to the twice-weekly Paris service, late June will see the launch of flights from Lyon at the same frequency), followed by Split. The popular Croatian summer destination will be offered this summer with weekly frequencies each from Marseille and Mulhouse.

According to OAG Max data for June 2013, over 10,000 weekly seats are offered by the carrier from Paris CDG this summer, making it the airline’s largest airport. At 68 weekly frequencies, the Paris airport also enjoys twice as many Air Méditerranée flights as the airline’s second-largest base, Lyon. 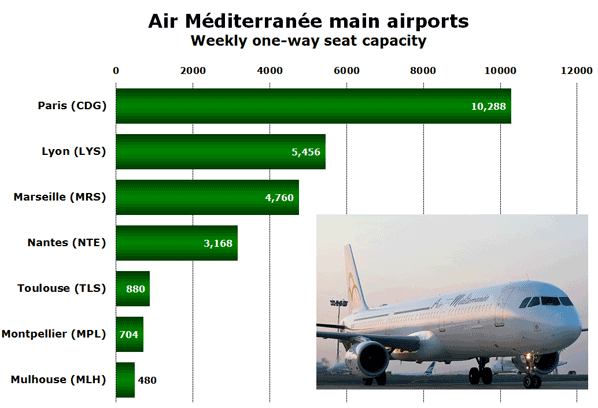 Around 5,000 weekly seats will be offered from both Lyon and Marseille in S’13. Respectively 31 and 35 weekly departures are scheduled for June from these two airports indicating that smaller 737-500s are used more frequently to serve the smaller Marseille market. The only other airport to have more than 10% capacity allocated this summer is Nantes.

Tel Aviv and Oujda are the biggest routes

Further examination of OAG Max data for June 2013 shows that Tel Aviv is the airline’s biggest destination in terms of weekly seat capacity, accounting for slightly more than 12%. Marginally less seats are allocated to Oujda in Morocco and Heraklion in Greece. The Moroccan destination leads in terms of weekly frequencies, as Air Méditerranée operates 22 weekly flights to this airport, which makes up for 15.2% of all weekly flights. 17 and 15 weekly services respectively are operated to Tel Aviv and Heraklion. 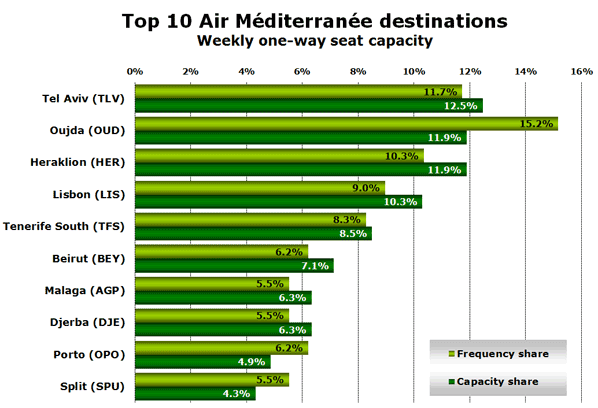 While no other destination has more than 10% of weekly frequencies, the expansion of the airline’s offering to Lisbon this summer means that the airport now concentrates 10.3% of Air Méditerranée’s weekly seats. Notably, the capital of Lebanon, Beirut, makes it into the top 10 list this summer – the carrier offers a total of nine weekly flights to this destination.