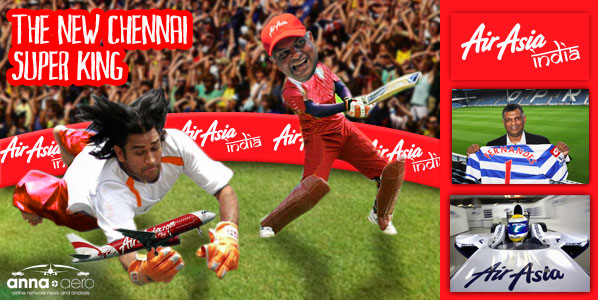 AirAsia CEO Tony Fernandes was born in Kuala Lumpur to an Indian father from Chennai where he has decided to base AirAsia India, the seventh incarnation of the AirAsia low-cost mega brand. Fernandes may want to consider expanding his sports sponsorship strategy to the Chennai Super Kings (the equivalent of Manchester United in cricket-obsessed India) as the most effective means of overcoming the eye-watering competition he faces on the 11 routes anna.aero is predicting AirAsia India will operate.

Although routes are yet to be divulged, Tony Fernandes, Founder and Group CEO, AirAsia, has already said he won’t serve some of the larger Tier 1 Indian airports in his statements on the start-up of AirAsia India, the seventh operation under the over-arching AirAsia low-cost mega brand (following AirAsia, Thai AirAsia, Indonesia AirAsia, AirAsia Philippines, AirAsia X and AirAsia Japan): “Certain airports we will avoid due to their high charge structure.” Specifically Fernandes says: “We wouldn’t see Mumbai as a main destination.” However, he does acknowledge that: “Delhi has a kind of low-cost terminal offering.”  It would therefore seem that AirAsia India will initially link smaller, Tier 2 cities to Chennai and will also look add some competition on the largest international markets in the medium-term. Here anna.aero investigates the potential target markets.

AirAsia India’s Chennai competition is fearsome (for whom?)

What we do know is that AirAsia India will be based at Chennai International Airport, India’s third largest. As low-cost airlines typically like to “join-the-dots”, Bengaluru and Kolkata would seem to be the most likely Tier 1 opportunities, as AirAsia already flies to both destinations from Kuala Lumpur. Competition on the Kolkata route will be against Jet Airways, SpiceJet, Air India and IndiGo – a combined 56 weekly flights – and it will be fiercer on Bengaluru, where the same four airlines fly 101 weekly services! Ignoring the remainder of the Tier 1 cities (Mumbai, Delhi, and Hyderabad), all of which have in excess of 10,000 weekly seats, eight Tier 2 airports are currently served from Chennai.

SpiceJet would appear to have the most to fear from the arrival of AirAsia India on its patch – as it flies to all eight Tier 2 airports currently operated from Chennai. Jet Airways would be a formidable competitor on six, with low-cost airline IndiGo operating on five, and state entity Air India on four of the routes.

Looking at the top four routes as being approximately the same size (in terms of 5-6,000 weekly seats), and assuming yields would be largely the same, Coimbatore, then Kochi (also served daily by AirAsia from Kuala Lumpur), with at least daily flights, would appear to be the routes with the most compelling arguments for start-up given that they have the shortest sector lengths of those city pairs. Conversely, with its lower seat volume (and therefore lower demand) and its longer sector length, Ahmedabad in Gujarat, would look to be the least appealing on this basis. Again, using the “join-the-dots” philosophy, AirAsia already flies to Tiruchchirappalli, 11 weekly from Kuala Lumpur, and, combined with it having the shortest sector length of all eight routes, perhaps a three, four weekly or even daily service may be considered.

Will AirAsia India invent some new routes too?

Should AirAsia India look to be a new route pioneer, there are a host of unserved Tier 2 airports from inside the top 20 largest airports in India, which are currently not flown from Chennai. All of the airports below already handle aircraft in the A320/B737 category.

Notably, the average sector length of 1,500 kilometres to these seven cities is more than double than that derived (640 kilometres) from the eight Tier 2 airport already served from Chennai — probably one of the reasons that they are not currently operated. Using a similar methodology to the served markets, it would appear that Nagpur in Maharashtra and Bhubaneshwar, the capital of Odisha State, would appear to be the most attractive unserved routes to consider from Chennai. Nagpur sustains daily A320 operations to Tier 1 cities Bengaluru and Kolkata with IndiGo, with Delhi (16 weekly) and Mumbai (59 weekly) generating significantly higher volumes of traffic. Chennai is currently the only Tier 1 airport not connected to Bhubaneshwar — Kolkata (35 weekly flights), Delhi (34), Mumbai (21), Hyderabad (14) and Bengaluru (7) are predominantly connected with multiple daily flights and on that basis this potential route may even justify a double daily operation.

Considering a further macro-economic metric, city population, the largest Tier 2 cities in India currently not connected to Chennai, or having a top 20 airport, are Surat in Gujarat, which has a population of over 4 million (sector length – 1,196 kilometres), Bhopal in Madhya Pradesh, population of 1.8 million (1,178 kilometres) and Patna, capital of Bihar State, population 1.6 million (1,487 kilometres). Surat currently has 11 weekly flights with Air India and SpiceJet to Delhi, and daily SpiceJet 737 flights to Mumbai — its only connections to Tier 1 cities. On that basis, if AirAsia India was consider services to Surat, it would probably start with two to four weekly flights to match potential demand. 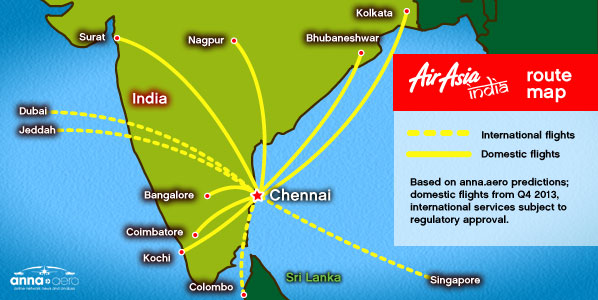 Indian Government regulations normally require a carrier to have operated domestically for five years and have a 20-aircraft fleet before it can operate internationally. However, Fernandes believes that “that may change”. On that basis, opportunities in the international market may again be concentrated on those routes where the highest volumes of traffic already exists, and AirAsia India would look to steal and stimulate market share. Off the route development radar (and not included in the chart below) are Kuala Lumpur, from which AirAsia launched flights in April 2010, while Thai AirAsia added flights from Bangkok in March 2012, initially from Suvarnabhumi International Airport, but more recently from Don Muang – unless of course the airline believes there are robust reasons for operating an Indian-originating service to benefit passengers at that end of the route. For operational reasons London and Frankfurt have also been excluded in this analysis. 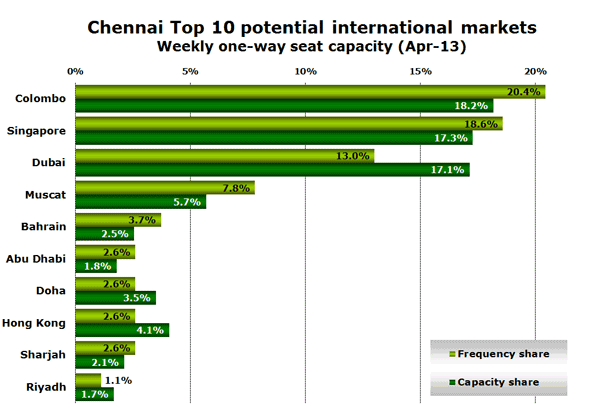 The top three routes of Colombo, Singapore and Dubai would almost certainly be dead-certainties, given they generate more than three times as much traffic as the #4 route of Muscat. In terms of currently unserved potential routes, services to the Middle East will no doubt be high on the route wish list, with Jeddah being the only top 10 point (in terms of weekly frequencies to India) from the region that is currently not flown from Chennai.

Domestic routes to include – Bengaluru, Kolkata – double daily. Coimbatore, Kochi, Nagpur, Bhubaneshwar all operated at least daily – the latter maybe even double daily. Possibly a low frequency service to Surat. Regulatory approval aside, international routes to include Colombo, Singapore, Dubai and Jeddah. Flights are planned to begin in Q4 this year, so we’ll keep an eye on route announcements in the coming months.