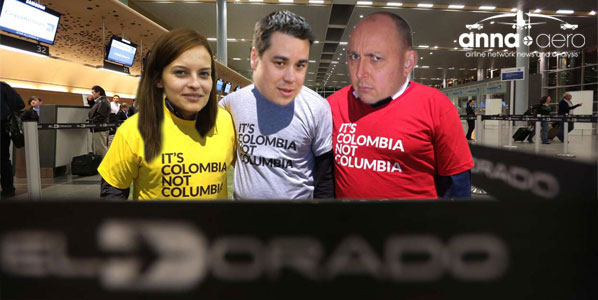 It’s Colombia not Columbia: To redeem our own wrongdoings, the anna.aero team has joined the movement that aims at getting the country’s name right once and forever. Bogotá El Dorado Airport, Colombia’s largest airport, is set to benefit from this highly successful social media campaign.

Latin America’s third busiest airport in 2012, Bogotá El Dorado Airport is Colombia’s main domestic and international gateway. The airport, which handled 22.5 million passengers in 2012, is jointly operated by a consortium of Colombian construction and engineering firms and the Swiss Flughafen Zürich AG (OPAIN), and serves one of the most dynamic economies in the region. According to data provided by International Monetary Fund, the country’s GDP was growing at an average annual rate of 4% since 2003 and, while 2009 was the weakest year for the country’s growth, the 2% GDP increase then was considerably better than the average declines of 6% and 1.6% noted respectively for the world and the region. This positive trend is set to continue to positively impact the development of commercial aviation, as internal demand remains robust and the country continues to step up as the region’s favourite for business.

Examination of data facilitated by Aeronáutica Civil de Colombia shows that passenger traffic at Bogotá El Dorado has virtually doubled between 2006 and 2012. A total of 11.8 million passengers (8 million domestic and 3.8 million international) used the airport in 2006, a number that increased to 22.5 million last year. Notably, even in the worst years of recession, traffic at the airport continued to grow, and in 2009, an overall increase of 11% was noted, followed by an impressive 27% leap a year later. 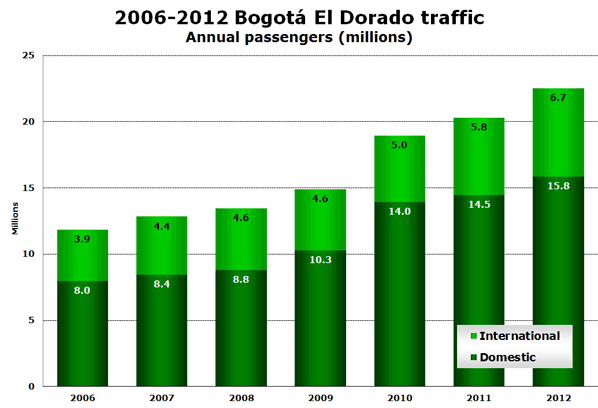 Air bridge to Medellín is the busiest domestic route

According to data published by the Aeronáutica Civil de Colombia, domestic traffic from Bogotá accounted for over 70% of the total in 2012. Examination of the airlines’ schedules for April 2013 shows that the country’s domestic market is dominated by the country’s flag carrier, Avianca, which has 68% of weekly seats and 64% of frequencies in the market, followed by LAN (respectively 21% and 20%) and Copa Airlines (7% and 8%). The residual capacity is taken up by SATENA, the state-owned operator of turbo-props and regional jets, EasyFly, and Viva Colombia, the country’s first true low-cost carrier. 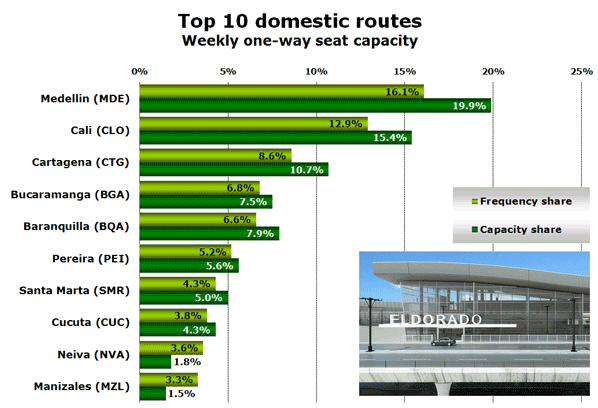 Four domestic routes were used by more than a million passengers (two-way) in 2012 (Medellín, Cali, Cartagena and Barranquilla), accounting for 38% of total domestic traffic from Bogotá. The largest of these destinations was Colombia’s largest regional centre, Medellín. 2.3 million passengers travelled on this route, making up 13% of the domestic market from the capital airport. April 2013 airline schedules largely reflect this pattern, with the air bridge between Bogotá and Medellín accounting for a fifth of domestic weekly seat capacity offered from El Dorado.

Avianca has 50% of international market; Panama City is the biggest destination

Just like in the domestic segment, Avianca also dominates the international market from Bogotá, which serves as its main hub. In April 2013, the airline has almost a half of all weekly seats and frequencies offered on international routes at the airport; its partner airline, Taca, adds another 5% to these figures. Combined, the two airlines offer 299 weekly flights to 26 destinations, the majority of which are in the Americas. The only two cities offered by Avianca outside of the continent are Madrid and Barcelona, served respectively with 10 and four-weekly frequencies. 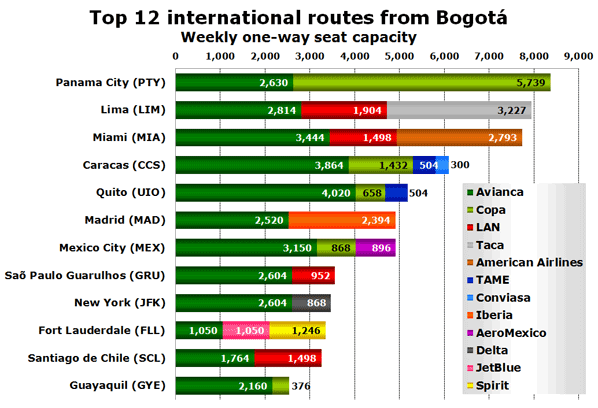 Panama City, the hub airport of Avianca-Taca’s Star Alliance partner, Copa, is the busiest international route from Bogotá. Two thirds of the 8,400 weekly seats and 69 weekly frequencies on the route are offered by Copa, with Avianca providing the remaining services. Unsurprisingly, Miami, FL, is the largest destination in the US in terms of weekly seat capacity, and is offered thrice-daily by Avianca, twice-daily by American Airlines (which has its Latin American hub here) and daily by LAN. Only 500 less weekly seats are offered on this route than to Panama City. Notably, another destination in Florida, Fort Lauderdale, is the only one of the top 12 list dominated by US low-cost carriers. While Avianca offers daily flights on the route, it is matched in terms of frequencies by both JetBlue Airways and Spirit Airlines (due to different onboard product, the latter markets slightly more seats on the route: 1,246 vs. 1,050 for each Avianca and JetBlue.)

Airport redevelopment to be finalised in 2014 During the launch of Bogotá’s new domestic terminal in autumn 2012, Colombia’s President, Juan Manuel Santos, stressed the long-term importance of infrastructure development: “At present, Colombia allocates around 1% of its total GDP to infrastructure related investments, but this amount will soon be tripled: 3% of annual GDP is about the right amount a country like Colombia should invest in order to improve its competitiveness through improved accessibility.”

October 2012 saw the official launch of the new international terminal at Bogotá El Dorado Airport, which constitutes the first part of a major redevelopment project due to be finalised in 2014, when the new domestic facility and ATC tower are commissioned. At 104,000 square meters, the international terminal doubled the size of the airport’s existing terminal facilities, but the airport’s capacity following the completion of redesign works next year will be capped at 20 million passengers per annum. In late January 2013, Fabio Villegas Ramírez, President of Avianca, the airport’s main airline customer, said: “While the improvement on what we had previously is infinite, the redesign was based on estimated 14 million annual passengers in 2014. Last year saw the airport handle 50% more traffic.”