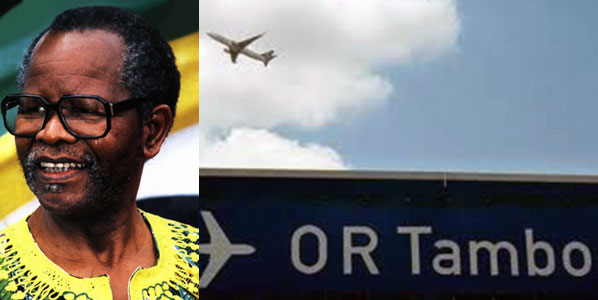 Oliver Reginald Tambo was a former president of the African National Congress (ANC), which after decades of struggle brought about the end of apartheid in South Africa. Before his time as president, Tambo was designated by the ANC to travel abroad to set up its international mission and mobilise international opinion in opposition to the apartheid system – therefore a fitting name to grace the country’s, and Africa's, biggest airport.

Located 23 kilometres from the city centre, operated along with eight other South African airports by the Airports Company South Africa (ACSA), Johannesburg O.R. Tambo International Airport is the largest airport in Africa, holding off for several years the continent’s #2, Cairo. Despite its dominant position, the airport has flat-lined in terms of passenger growth, handling between 18 and 19 million annual passengers in each of the last three years. 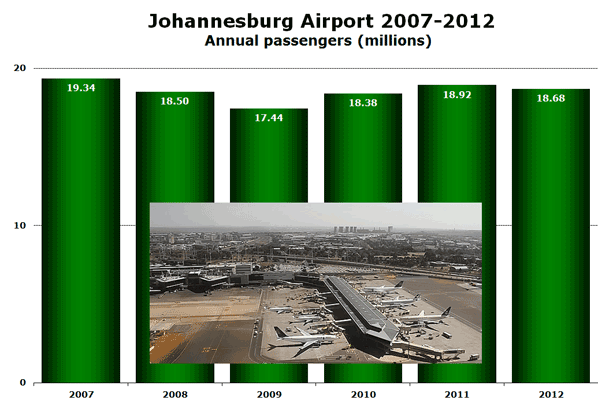 ACSA splits its passenger traffic into four categories: International, Regional, Domestic and Unscheduled (Charter). While total traffic at the airport was down 1.3% between 2012 and 2011, due to declines across the latter three sectors (-1.8%, -3.8%, -2.4% respectively), international passengers increased by 1.9% to just below 8.2 million. New routes like South African Airways’ thrice weekly A340-600 operation to Beijing and (although it collapsed in September 2012) Air Nigeria’s thrice weekly Lagos A330 service will have contributed to this growth. Traffic at the South African hub has not got off to the best start in 2013, with January figures showing a 3.6% decline versus the previous year, which was still better than the country’s second airport, Cape Town International, which witnessed a 5.7% monthly drop in passenger numbers.

Traffic seasonality at airports is an important decision making factor for prospective airlines when evaluating new routes, as it allows them to plan their capacity more efficiently, as the carrier is not having to flex its capacity up and down to cope with wild seasonal variations. During the last 12 months of available data, Johannesburg flows peaked at 1.67 million in October 2012, but only fell to 1.44 million in February 2012, representing a variance in monthly traffic of just 16% (anna.aero considers below 20% a good performance). Perhaps this is a southern hemisphere phenomenon – Adelaide Airport (covered recently by anna.aero) boasted one of 13%. 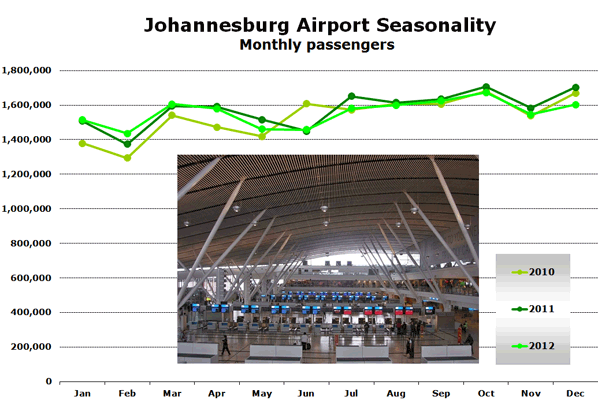 Operating in 11 of Johannesburg’s top 12 routes, is South African (and its regional partners – SA Airlink, Congo Express, South African Express Airways). The home-based carrier is also the dominant airline on the airport’s two biggest routes, both domestic — namely to Cape Town and Durban King Shaka International airports (both also ACSA-operated) — with 45-50% market share. The partnership between British Airways Comair and kulula.com takes second spot, with just below 40% in both markets, with low-cost carrier Mango picking up the residual market share. 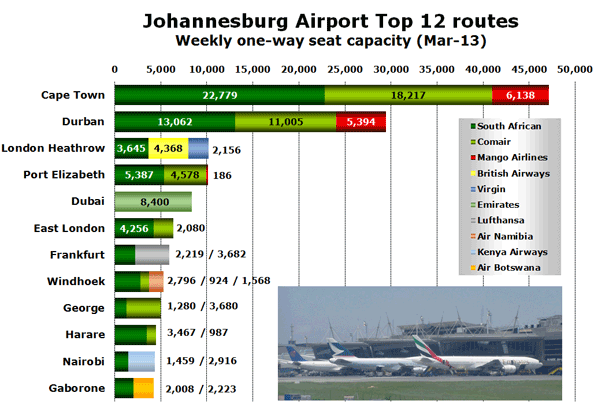 The only monopoly route in the top 12 is the thrice-daily Emirates Airline service to Dubai, which has been operated on a codeshare basis with South African since 1 June 1997 (as well as the Cape Town to Dubai route). However, Dubai is not the biggest long-haul route, as the five-daily run (South African — 2; British Airways — 2; Virgin Atlantic Airways — 1) to London Heathrow takes that accolade. Europe and indeed Frankfurt, takes the only other remaining top 12 place for a route outside of Africa, due to Lufthansa and South African both operating single daily flights.

Excluding the domestic market, which is nearly as big as all international markets combined (despite declining by 14% in the last year in terms of weekly flights), it is the UK, UAE and Germany that therefore make a similar showing in Johannesburg’s country market profile, being the only non-African nations. Given the long-haul kit that is used on all three routes, all three countries do out-perform in terms of weekly seats, with typically twice as much capacity market share than frequency share. 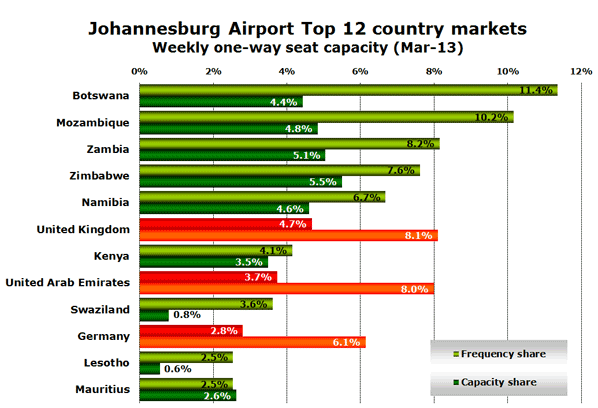 Frequency growth in the past 12 months has been highest on routes to Mauritius (+36%), Kenya (+29%) and Mozambique (+10%) – the former due to Air Mauritius increasing its weekly flights from five to 10 between March 2012 and March 2013. However over the same time frame, 10 weekly services (-17%) have been chopped from Namibia to Johannesburg, with South African and Air Namibia both trimming (six and five frequencies respectively), but British Airways Comair has improved its schedule to daily from six weekly.

Johannesburg has its own airport awards ceremony, the Feather Awards, to “thank all of the airport’s stakeholders and reward consistent stakeholder service excellence”. Airline winners at the last awards, held in November 2012 were: